For her film Erin Brockovich, Julia Roberts accepted her Oscar in a dramatic velvet-and-satin Valentino gown. "For the biggest night of her career, Ms. Roberts made a very smart choice in picking a vintage dress from my 1982 collection dedicated to movie stars," Valentino states. "I was excited—this one was classic Valentino, and I felt she would surprise people with her elegance. But this dress made me nervous. You are never sure who is going to wear what until they walk out onto the stage. That night I was in Rome, watching the Oscars live on television, and I stayed up until the wee hours of the morning to see if she wore it. Julia was very sweet. Afterward she told me her niece [Emma Roberts] had given her important advice: 'Listen, when you come down the red carpet, don't forget to turn around. Otherwise, no one will see the back, and that's what makes it so special.' But I think Julia is what made it special." Uma Thurman who was nominated for her role in Pulp Fiction, chose a simple lilac design from Prada. The Italian label "Fashion and the Academy Awards", whom at that time was known primarily for their must-have accessories hired L.A.-based freelance designer Barbara Tfank to guide the process. "I said, 'How would you like to look? Like a femme fatale? Or a fairy princess?' and she chose fairy princess," said Tfank. The end result was a streamlined silk design, dusted with opalescent sequins. This canary vintage Jean Desses gown made Renee Zellweger one to watch on as she strutted her style down the red carpet. Reese Witherspoon stole the spotlight at her Academy Awards debut, thanks to a Valentino makeover. "It was her first time presenting and she wasn't as well known back then. People thought of her as cute, but not glamorous. "We thought she could be the new Grace Kelly and made a gown that was romantic and fresh—as if she were starring in a brand-new movie." Nicole Kidman made history in her chinoiserie gown from Christian Dior. "I was the new boy at the big House of Dior, and there were people who didn't think I would cut it," John Galliano stipulated. "Nicole looked like a goddess and showed the world she believed in me. I had seen all of her work and wanted everyone to see her as a star in her own right, as well as being Mrs. Tom Cruise at the time. I've always been seduced by Hollywood, and it was a complete honour to dress her. Nicole trusted us and let us suggest a new direction and the striking chartreuse colour, which was controversial at that point because everyone was using primaries or pastels. Dior turned the dress around quickly, as it had only been a month since the origin of the idea had appeared on the catwalk. She looked incredible—and even all this time later, she remains timelessly elegant and yet still directional." 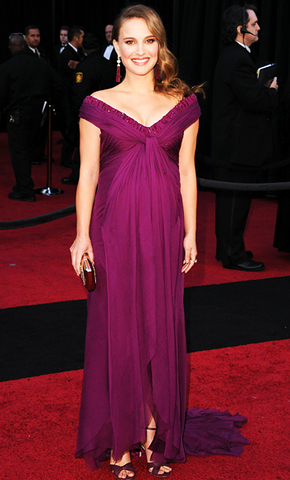 A pregnant Natalie Portman selected a plum, off-the-shoulder gown from Rodarte, the design duo responsible for the costumes she wore in her Oscar-winning role in Black Swan. 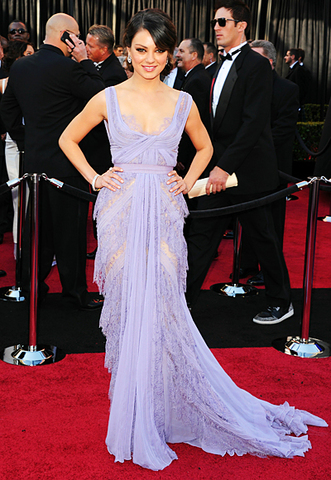 Michelle Williams, the Brokeback Mountain nominee owned the red carpet in a marigold design from Vera Wang. Chosen a week before the ceremony, the silk-chiffon dress was accessorized with dark 19th-century Fred Leighton diamonds. "I like things a little off," stylist Kate Young told Entertainment Weekly. Grace Kelly won an Oscar for the film "The Country Girl", wearing a classic ice-blue design by Paramount studio costumer Edith Head. The gown was created for the movie's premiere and was cut from a bolt of $4000 French satin and paired with a matching evening coat. "Some people need sequins—others don't," Head was quoted saying at the ceremony, which she attended as Kelly's date. Marion Cotillard wore Jean Paul Gaultier's glistening under-the-sea embellished gown. According to the designer, "Marion initially requested something simple, but I wanted everyone to see the woman I saw, so I showed her the sketches for this mermaid-inspired dress, and she loved it. We waited two weeks for the fabric, which was printed with fish scales and hand-embroidered. She was traveling everywhere promoting La Vie en Rose, so we had to follow her for fittings." 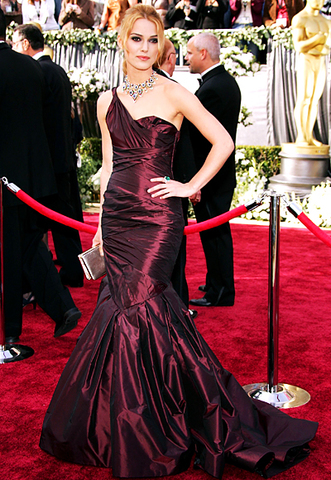 "Keira wanted something dramatic and sexy," Vera Wang told people about the burgundy mermaid dress she made for Knightley's Oscar appearance."The colour is absolutely gorgeous on her." Nominated for "Crazy Heart", Maggie Gyllenhaal chose a print gown from her friend Dries Van Noten. "He designed my wedding dress," said the actress, who had difficulty choosing between the three Oscars options offered by the designer. "I couldn't decide until late yesterday." Just four days before the ceremony, a gown similar to Maggie's custom-made number was a hit on Van Noten's Paris runway. A gown created by Valentino for Jennifer Garner to wear in 2004. "Jennifer is so comfortable in her own skin, she can wear a gown this complex," the designer told people of his amazing creation. "Fifteen yards of taffeta—I lost count of the amount of silk chiffon! The skirt alone has two layers and that train goes on forever, darling. It took four couturiers more than 300 hours to create it. Jennifer handled herself on the red carpet as if she were greeting people in the back garden of her home. She has an easy grace that makes her so beautiful." 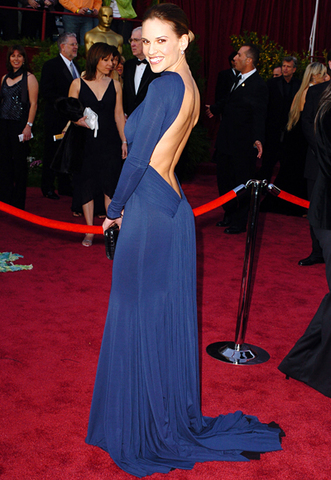 For the film "Million Dollar Baby"  Hilary chose a low-dipping Guy Laroche gown. "I looked at a few dresses, but I fell in love with this one." 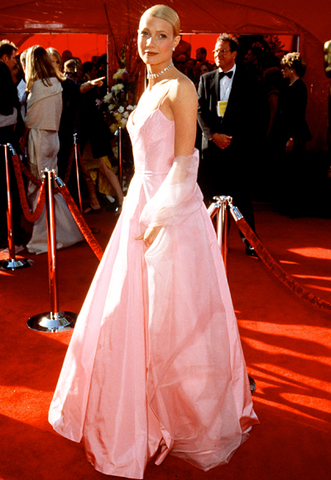 "I just wanted to look very sweet," Gwyneth Paltrow said of her pretty pink Ralph Lauren gown. "She thought it was too structured," Lauren's representative Crystal Moffett Lourd said of the decision. "She had a long night ahead of her and wanted to be comfortable." Marilyn Monroe chose a cloud of black tulle from the 20th Century Fox wardrobe department for the 23rd Annual Academy Awards, moments before presenting the sound-recording award, Monroe discovered a tear in her dress and insisted, "I can't go on!" The skirt was mended backstage and she was able to make what would be her only Oscars appearance. Freida Pinto an Indian actress wore a sari-inspired design from John Galliano. To complement the cobalt design, she wore a 150-year-old diamond from her native country. Cate Blanchett had a vision when it came to her stunning bespoke gown,  Said John Galliano to author Bronwyn Cosgrave in Made for Each Other: Fashion and the Academy Awards: "The hummingbirds, the embroidery, the colour, it was her idea to put the embroidery on the back, and she was right. She was so precise, Cate. She knew exactly what she wanted. It was a true collaboration." Cameron Diaz went for Emanuel Ungaro's floral print dress with a 19th-century Indian necklace from Fred Leighton for a look that was uniquely her. "I wanted to wear something I felt casual and myself in," she told People. "I feel like I just got out of bed and threw it on." 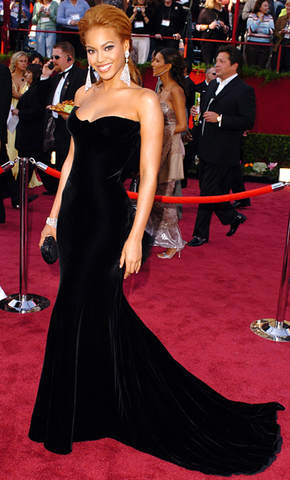 Beyonce made her way down the red carpet in a luscious black velvet vintage gown from Atelier Versace before performing Best Song nominees onstage. 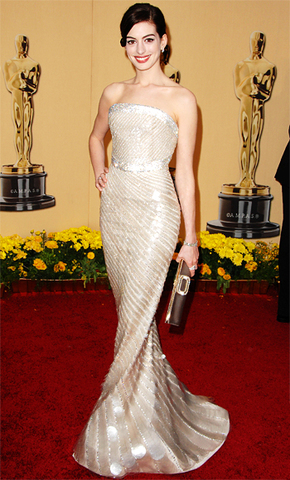 Anne Hathaway glowed in Giorgio Armani. "Anne is so lovely and ethereal—she reminds me of the great actresses of Hollywood's Golden Age," the designer told people. "For this reason I dressed her as a type of fairy-mermaid, pure and sparkling. The strapless gown is derived from our Prive couture collection and has Swarovski crystals on a diagonal and oversize paillettes at the hem. The champagne color was meant to match her complexion so it would seem like a second skin on her. She looked truly breathtaking." Jennifer Lopez shined in a crystal-strung Marchesa design. I want to keep it!" she told reporters of the custom gown. "The sketched a couple of dresses for me and they made three and I chose this one."