Jaguar. Just saying the name conjures up a host of adjectives. Regal is a good word to describe the British brand, but Jaguar actually began their history building sports car before it was even called  Jaguar, let alone be thought of as regal. Its lineage of letter cars began in 1951 with the racing C and D-TYPES. These two sports cars set the stage for the incomparable E-TYPE. A car Enzo Ferrari referred to as the best looking car in the world, which went on to sell 70 000 units from 1961 to 1974. 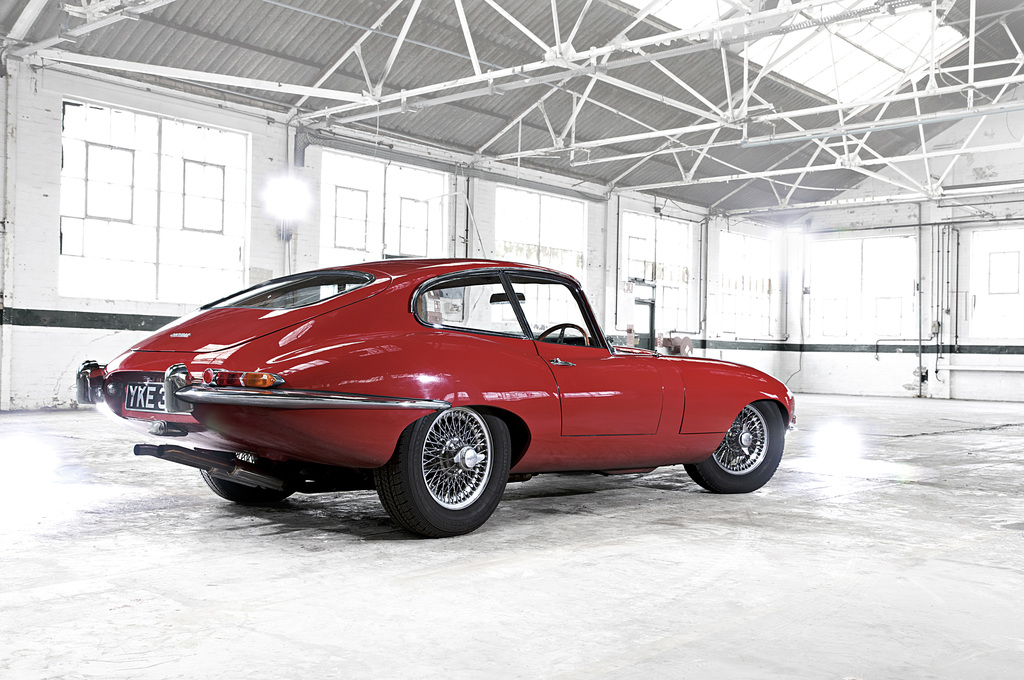 When you have built the most beautiful car ever made what do you do as an encore?  Apparently you wait forty years, and then launch its successor, the F-TYPE.

Jaguar has done a splendid job of marking its territory in the luxury car market. The F-TYPE will be its first real sports car in half a century. The sports car/roadster market is dominated by seasoned veterans like the high-end Porsche Boxter S and the benchmark everyday sports car, the Carrera Cabriolet. There are the top of the range BMW Z4 3.5iS and Mercedes-Benz SLK 55 AMG to consider, though they are more pretenders than real threats.

The new F-TYPE bears little resemblance to the iconic E-TYPE. Walk up to the car and around it, and you’ll notice the vertical headlights that take your eye up the front of the car housing the J-Blade LED daylight running lights. The grille is flanked by twin ‘shark gill’ openings, intended to give as much visual impact as possible. Walk to the rear of the car and you notice my favourite part, the voluptuous rump. The muscular rear haunches before sweeping dramatically around the sensual low tail, made possible by the inclusion of an active rear spoiler which deploys at speed to reduce lift by up to 120kg. Let your eye wonder lower down and you notice two large ominous tail pipes. All the better to trumpet the sounds of its 75 years of racing pedigree. In fact the F-TYPE has been engineered to sound like the C or D-TYPES of the 1950’s. 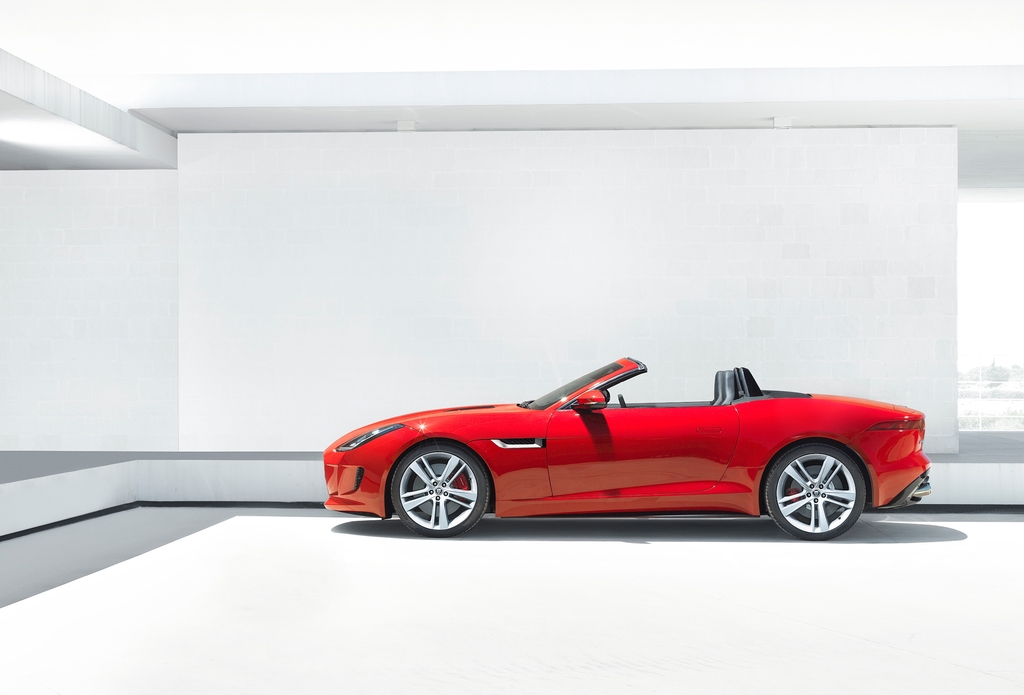 “Every aspect of a sports car, dimensionally, allows us to create something that is visually exciting; visceral as well as physical. To me the definition of sports car design is being fit for purpose, wrapping up the occupants and mechanicals in the most exciting, beautiful and sensual package possible with no unnecessary surfaces or adornment.”

“A piece of design should tell a story and this is why every line in the F-TYPE has a start, a direction and a conclusion. If you approach every line individually and get it as aesthetically correct as possible, get the dimensions right, it will stand the test of time.” Ian Callum, Director of Design, Jaguar

The interior of the F-TYPE has a lot to live up to if you considering the dynamic exterior. Gone are the walnut inlays of yesteryear. The focus point of interior is the J-shaped grab handle that sweeps down the centre console on the passenger side, delineating it from the driver’s position. Jag like to throw in J-shaped details on their cars. I remember XJ’s from the 80’s which sported a J-shaped automatic gear selector. The F-type’s interior takes inspiration from cockpits of fighter airplanes, the controls are ergonomically grouped by function. The Engine Start button, steering wheel mounted gearshift paddles and Dynamic Mode toggle – are highlighted in an orange finish, Ignis, similar to that used on the markings on professional divers’ watches. A distinctive highlight is the exterior door handles, sitting flush with the cars body until you press them and they eject like small wings, purposely, acting as a stylish handles and are ergonomically streamlining too. 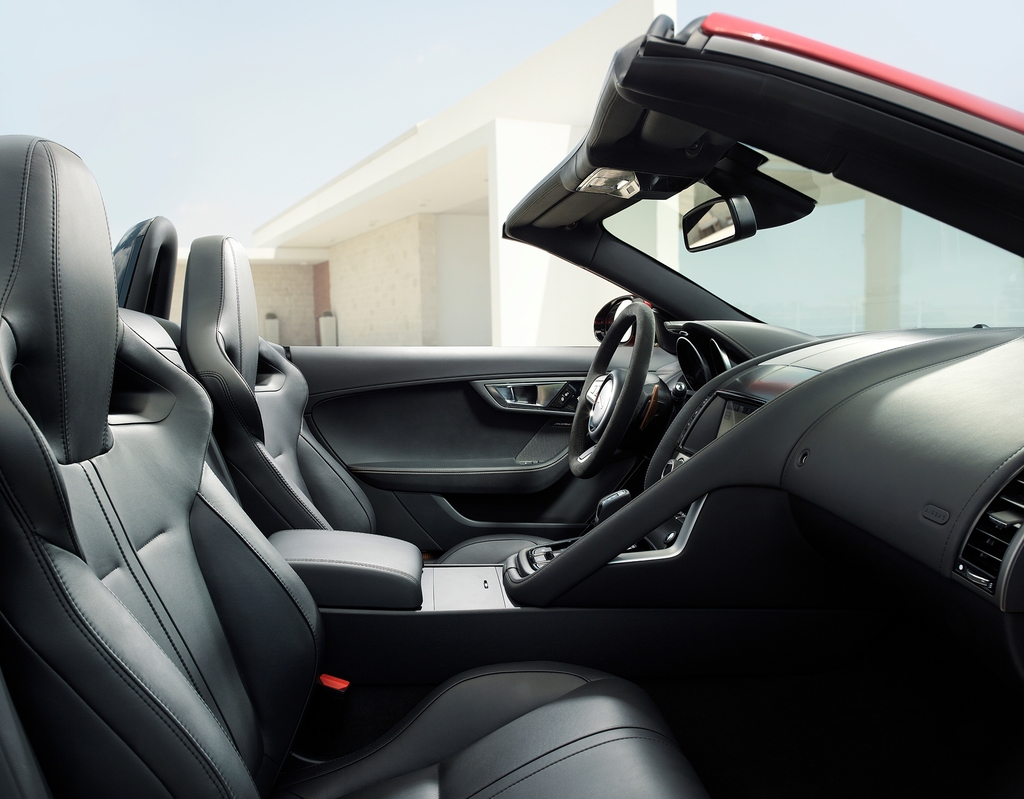 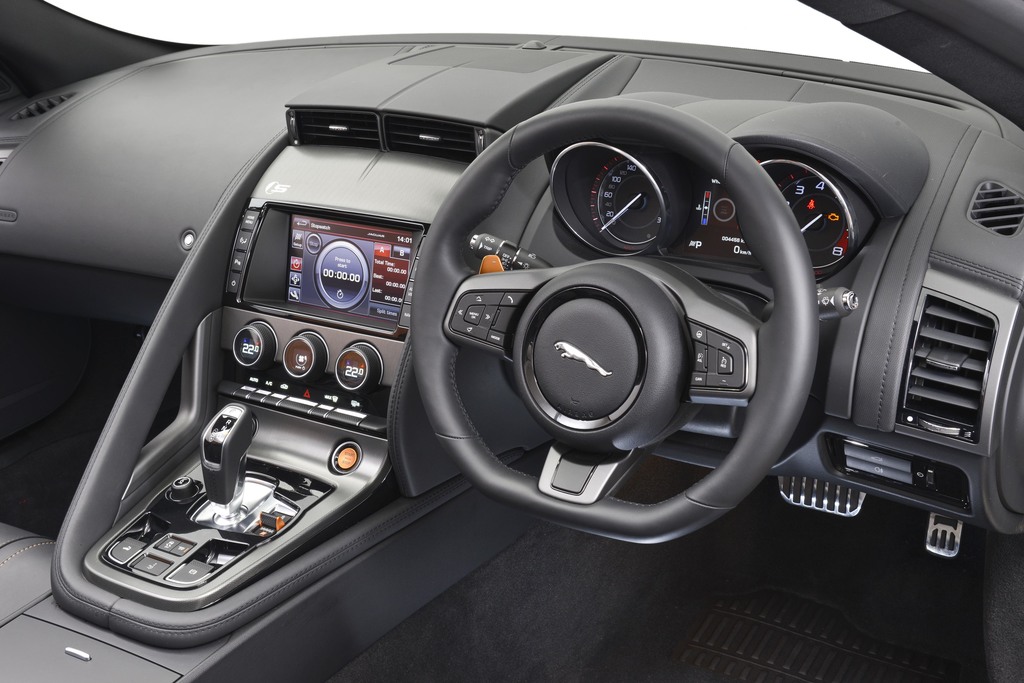 “We wanted the experience of sitting in the F-TYPE to be exciting. A sports car cockpit should be an intimate place and so we aimed to get a sense of the surfaces falling towards and then wrapping around the driver”

“What we’ve done is given it the essence and spirit of doing what you want to do rather than what’s expected of you. The more processed this world becomes the more important that is.” Ian Callum, Director of Design, Jaguar 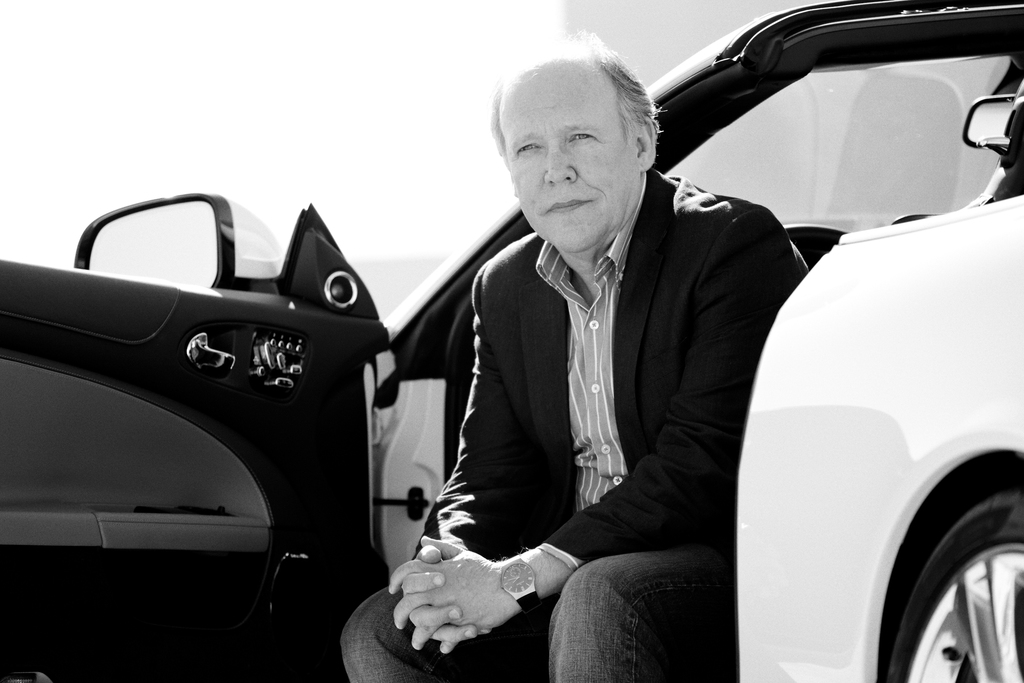 It has been said that the F-TYPE S (280kW) model is the ‘pick of the bunch’. Why? Not often in life is the middle kid considered to be the best mix. The standard F-TYPE is a compelling package and the top of the range V8 S rumoured to be as wild as Prince Harry.  The V6 S comes standard with a mechanical limited-slip differential which maximise traction and driver reward. The S models also have an ‘Active Exhaust’ system and an optional Configurable Dynamics programme. This allows the driver to tailor a number of the dynamic features to personal taste. While the valves in the exhaust system open under load from 3000rpm which allows the exhaust note to build to a thrilling crescendo at the redline. Does this answer the question?  On the road the S’s additional 30kW of power and the above mentioned tweaks make the S 3.0-litre loads of fantastic fun.

I could go on about how the F-TYPE has ‘this’ and ‘that’ to make it an exhilarating drive, but the bottom line it is. From the minute you start the engine and hear the snarl lash out of the exhaust pipes, revving the angry kitty cat with the optional Switchable Active Exhaust releases an audible snap, crackle and pop that is priceless and
left me giggling like a naughty school girl. It is amazing to think that the sound originates from a 3-litre supercharged engine. You would think it was from Ferrari.

The ride of the car is firm but it’s a sports car and actually more comfortable than the pretenders mentioned above. Handling is razor sharp and when you get the rear to pop-off its rails mid corner it is easy as pie to get Miss Kitty back on the straight and narrow so to speak. Steering is precise, with a short turning circumference. Breaking is incredibly surefooted and as quickly as Miss Kitty bolts from 0-100km in 4.9 seconds, so too does she stop. The 8-speed auto does a great job of slicing through the gears and it is great fun flicking through the gearbox manually via the steering mounted paddle shifters. The 460N.m of torque is perfectly propelled out onto the road via the F-TYPES rear wheels. This power and supremely stiff chassis make Miss Kitty’s claws perfectly matched. The F on her collared tag could only stand for one thing, F is for fun. 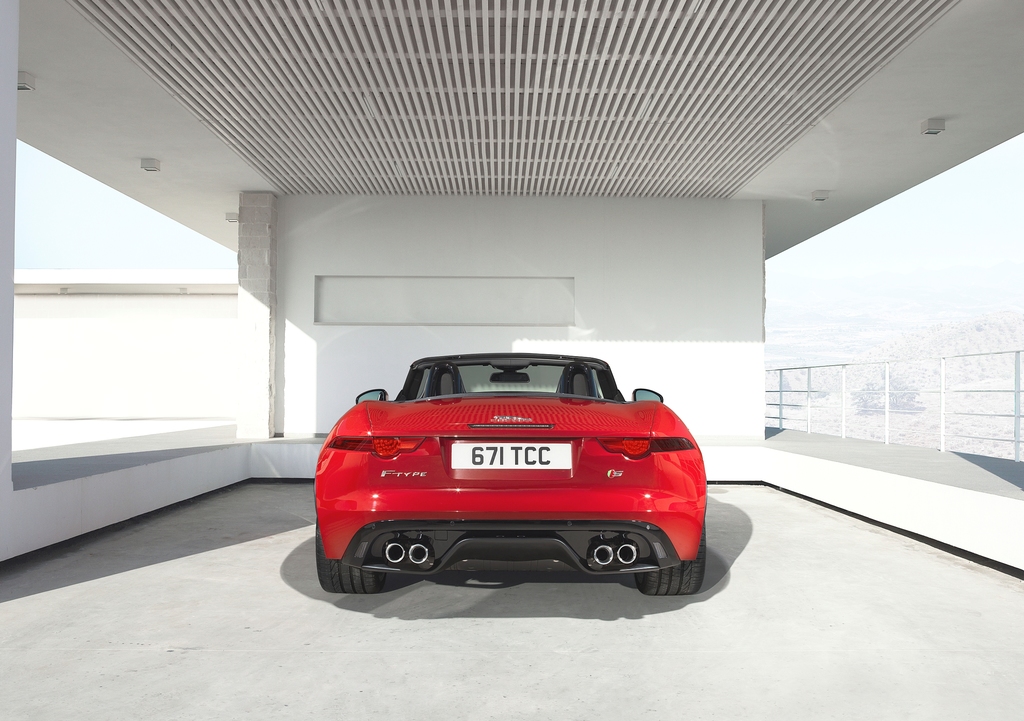 So with all things good there are the not so good. The F-TYPE is expensive and has a teeny tiny boot. Considering the rands value is equivalent to three ply toilet paper at the moment, this along with high import duties effect the F-TYPES price. There are a few options available on the car which really should be standard for a vehicle just shy of a million rand, namely: a wind deflector, heated seats, and automated windscreen wipers and headlights that now come standard on a Renault Clio 4.