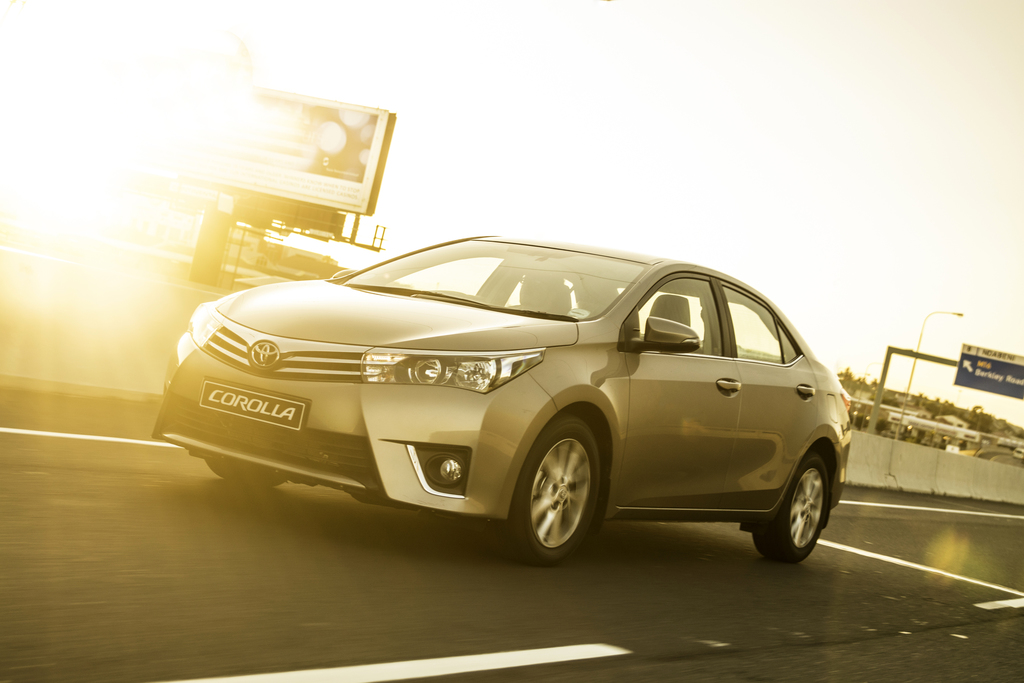 It has been around forty seven years and had eleven reincarnations. Every year they sell 1.1 million of them, and over its production history they have produced 40 million units. Can you guess what I am referring to? I’m not referring to Madonna’s musical reinventions and album sales, though it’s good guess, but rather to the world bestselling car- the Toyota Corolla.

2014 marks the arrival of the New Generation Corolla. Its fresh new styling and upmarket cabin are Toyota’s proud presentation of the brand’s most important vehicle. South Africans love them (as of November last year 1 million Corollas had been made and almost that many sold in our country alone). 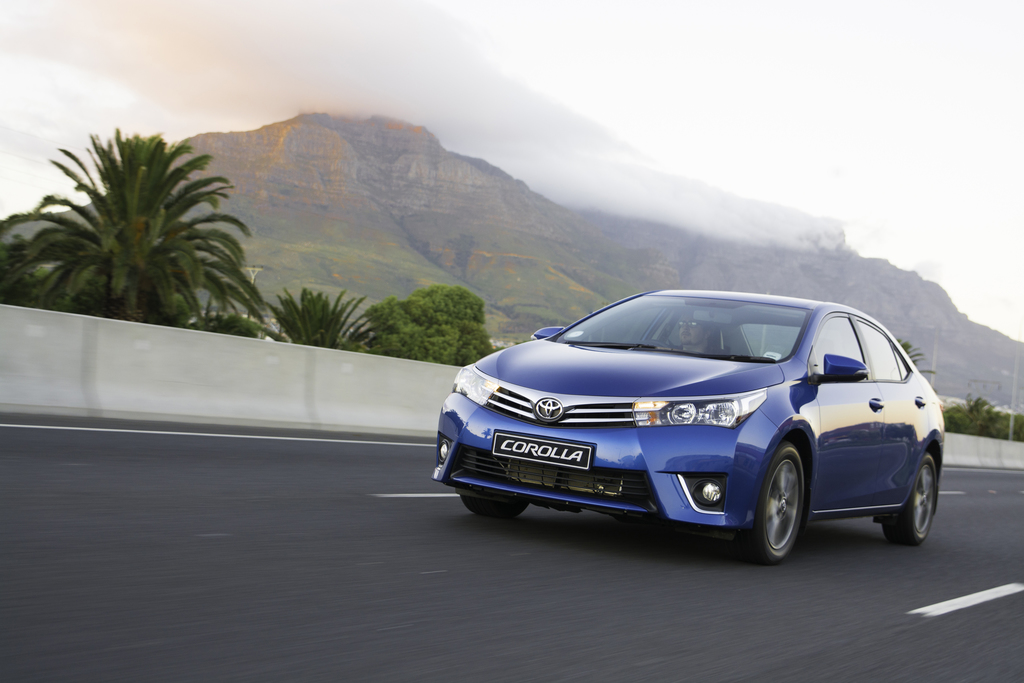 Keeping the number one spot as being the world’s best selling car is no easy feat. Though it is popular by virtue of its history as a reliable, practical and economical vehicle, the engineering team have aimed to make the new car the very best within the C segment.

I must be honest, when I was invited to the launch my journalistic head was practical in deciding to cover the story, but my heart on the other hand didn’t raise a beat. I believe Corolla customers are practical people and they don’t make decisions with their hearts. They want a damn good car that won’t break down, is simple to service and economical to run. When it comes time to replace it for something new, they also want to know that their investment in a depreciating asset comes standard with a parachute, keeping your asset from plummeting to the ground faster than a hot knife through butter. I must confess, growing up my family had a Corolla. It was the car that I learnt to drive in and the car I secretly stole over weekends at fifteen years old. That particular car preceded the newly launched rendition by four generations.

The New Generation Corolla is all that you would expect and more than the must have items mentioned above. It feels more upmarket than ever before- real leather is used on most of the models bar the entry level options. Electronic aids are aplenty and interesting design details have been borrowed from its big premium brother, Lexus. Visually the New Generation Corolla looks good, I won’t try to illustrate in words what these pictures do better, but I will note that the car does look better in the flesh.

The New Generation Corolla carries over its entry level 1.3 and bestselling 1.6 petrol engines. New to the range are the 1.8 petrol and 1.4 turbo diesel units. At the launch we were given the opportunity to put them through their paces. The 1.6 mid spec’d Sprinter was our starting point. In an electric blue metallic paint finish and partial leather trim, it is priced just under R250 000. The cabin was quiet and well insulated from the outside world. It comes standard with automatic climate control and a 6-speed manual transmission. The 1.6 engine offers reasonable performance and good fuel economy. 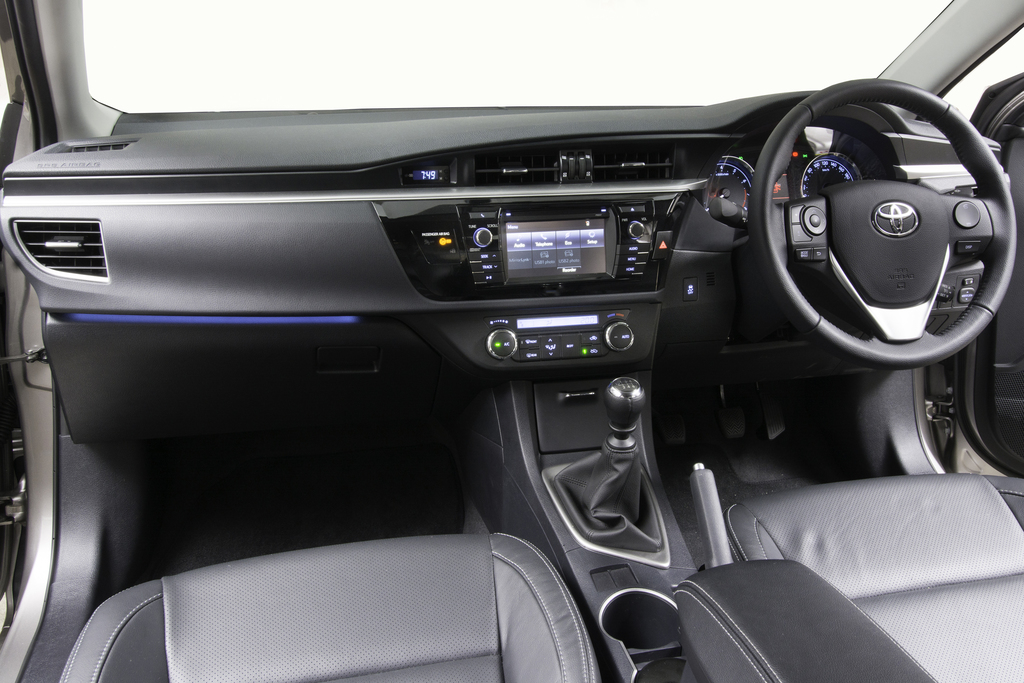 Next up was the flagship 1.8 Executive manual. This car was in a metallic mushroom grey colour called Avant-Garde Bronze. Opening the car with its new chunky door handles that accentuate the car’s shoulder line, reveal a leather lined luxury cabin. This particular spec offers electric everything, it’s a full house. The 1.8 engine is slightly more powerful than the 1.6 engine and due to its bigger capacity fuel consumption is compromised slightly. The 1.8 Executive model retails for just over R270 000.

Last but certainly not least, the 1.4 turbo diesel Prestige unit. Quiet on start-up and super comfy. The full leather clad seats have been bolstered to feel rather sporty. Bluetooth and reverse camera are standard on this model. The diesel unit being assisted with a turbo made for a rather enjoyable driving experience. Its easy clutch movement made moving around a packed Cape Town CBD a breeze with its 6-speed manual gearbox. Climbing up the Mother City’s hilly terrain is easy work for a diesel engine. Its higher levels of torque (shove in your seat) made changing done a gear or two partially redundant. It is also the most fuel economical of the cars on test. The 1.4D Prestige retails for R250 000.

My pick of the bunch would be the 1.4D Prestige. It offers great driving performance and good levels of equipment as standard, not to forget its frugality. If the R250 000 price tag is a tad steep for you, there is a cheaper lower spec’d Esteem model which is R12 000 less at R238 000.

The New Generation Corolla is a good car. Its levels of comfort and upgraded quality make it everything you would expect and more. It is like a little and cost effective Lexus. I am impressed. So those of you who think with your head this car is a no brainer. For those of you who are more of an emotional and purchase with your hearts, it may be a bit bland for you. You could tell your friends its design is more aerodynamic (at 0.27) than a Porsche Carerra 911 (at 0.29). Considering the current political conundrum that is affecting both you and me financially, this is a very safe bet to park your hard earned money. All new Corollas come standard with a 5 year/90 000km service plan. Prices range from R215 000 to R284 000.