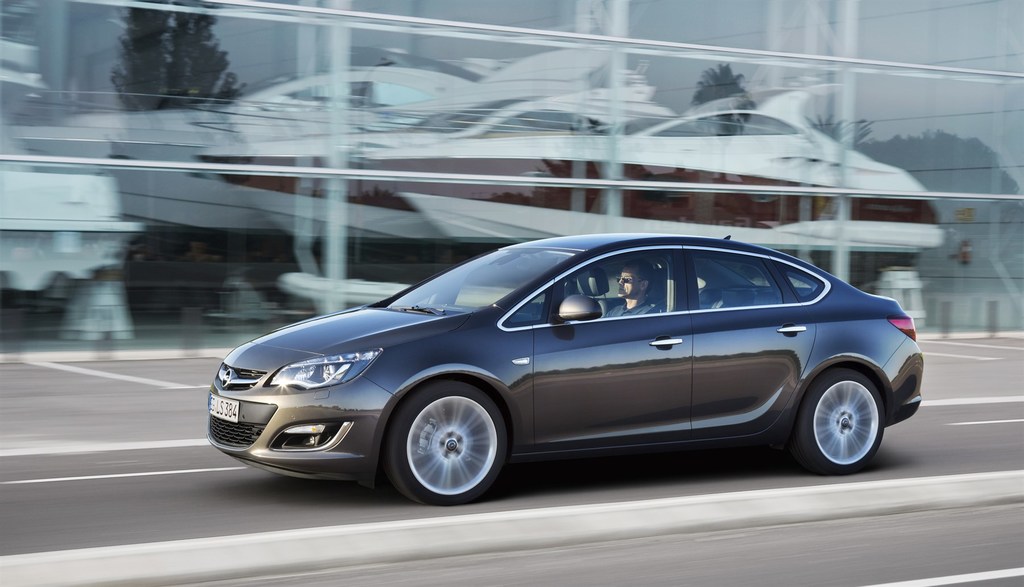 The Opel Astra Sedan is arguably the best looking sedan in its class. It went on sale in October last year and I was excited. I love it when another good looking car hits our road. From the front, it features the same ‘face’ as its hatchback sibling. From the side it has a similar profile to VW architecturally aesthetic CC, albeit more compact. The rear is a symbiosis of the modern front and its sculptural profile, it’s the cherry on the cake of a homogenous design.

The interior follows a similarly creative blend of sculptural lines, although with form taking precedence over function. The cabin is littered with buttons that activate a host of mod-cons like: automatic headlights, rear PDC, cruise control, front heated seats (which comes in handy during winter) and Bluetooth. The 1.6 Turbo Cosmo model is the flagship in the sedan line up and features sport hugging and multi adjustable leather looking upholstery.

Though well spec’d, the curvaceous waterfall dashboard looks like the cockpit of an Airbus. Even after a few days, you still need a few seconds to recognise the button you were looking for. 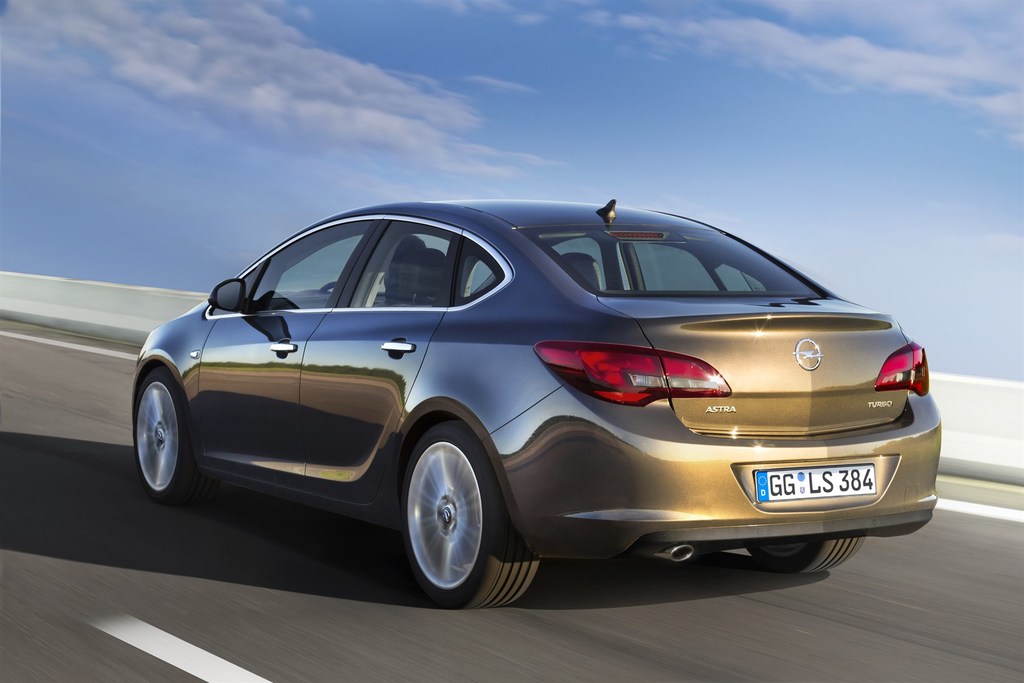 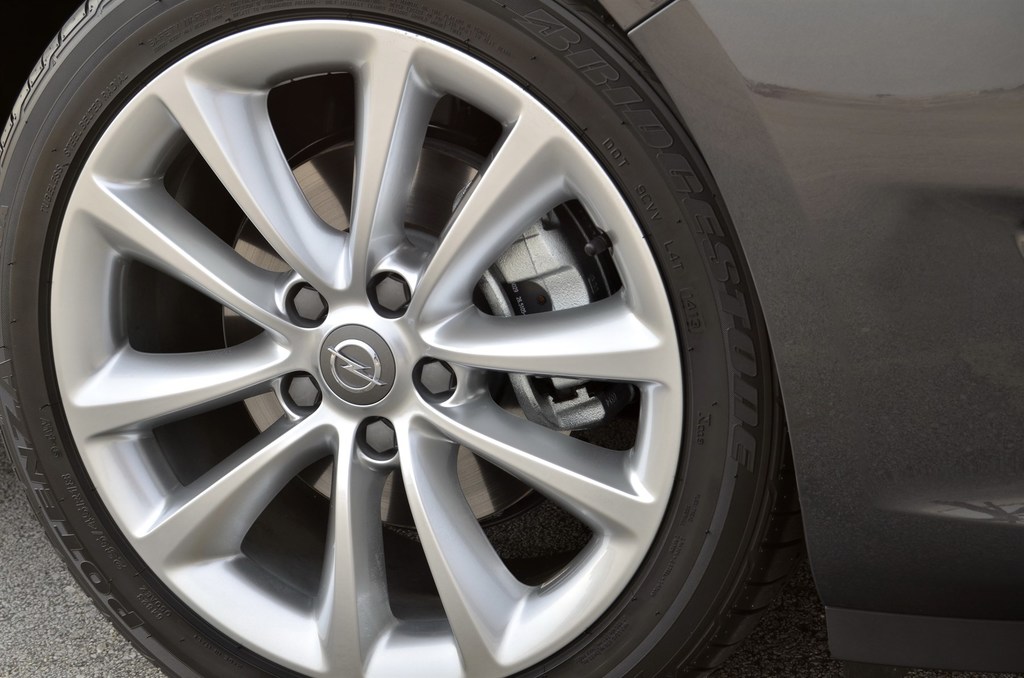 The Astra Sedan comes is two engine variants a 1.4 and 1.6, both combined with turbo charges. The 1.6 Turbo on review was mated with a six speed manual transmission, though the 1.4 Turbo can be purchased in 6 speed automatic too.

Both engines offer spritely performance, but with the focus on the 1.6 Turbo. The engine is free revving though not as robust as some of its competitors.  Dynamically Opel’s are known for their balanced road manners, which translates as a true driver’s car. The Astra instils confidence in its driver and encourages the driver to enjoy is energetic prowess, albeit the manual gearbox does contradict this charm. Changing gears feels like moving a beach spade that is partially submerged in a sandpit- vague and notchy.

The Astra sedan will comfortably accommodate four adults but a fifth centre passenger may find it a tad restrictive. The cabin wraps around its driver and passenger similarly but to a lesser degree like a sports car. Larger drivers might find getting a perfect driving position a tab more challenging because of this cosseting interior design. 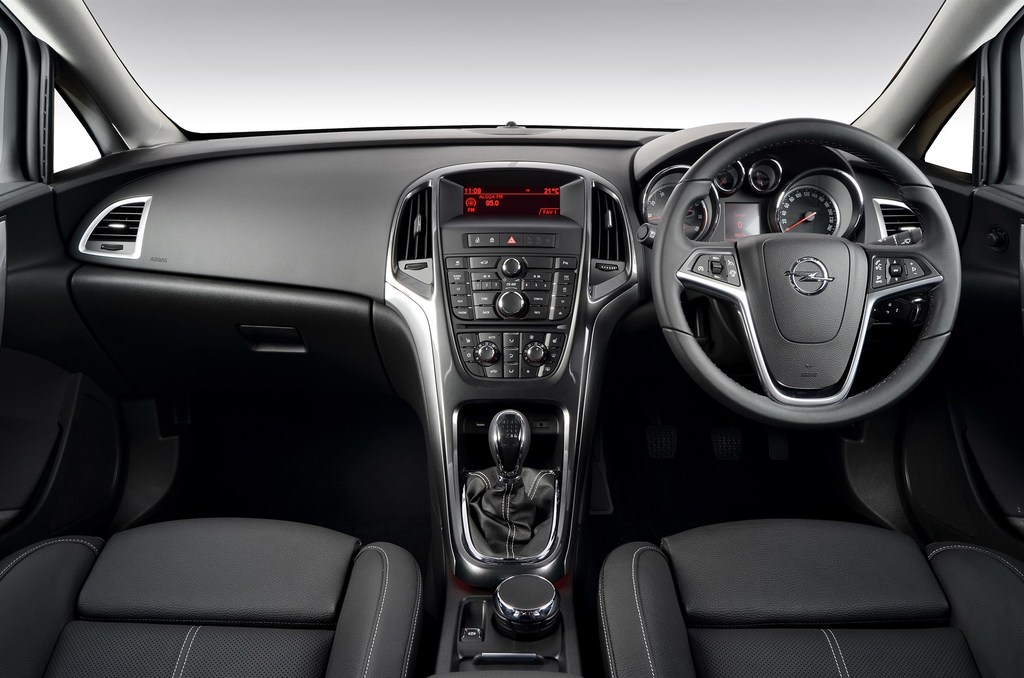 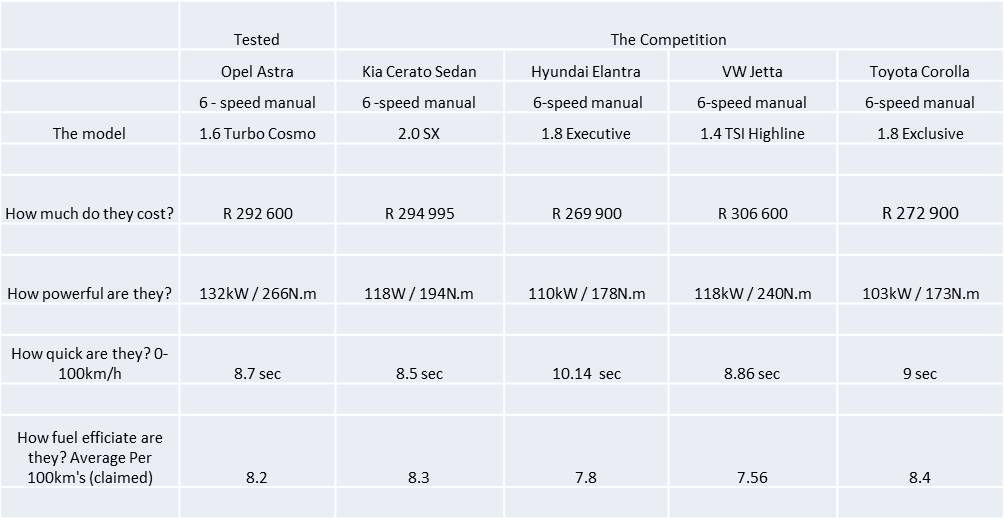 The Astra range has grown over the years. Initially the VW Golf/Jetta were once the primary competitor. Fast forward two decades and there is a Smartie box of French, Korean and Japanese players vying for your attention and ultimately your greenback.

The benchmark by which all in this category are measured, is the category inventor, the VW Golf. In this case the Jetta 6. Though it’s a masterfully built, it’s now long in the tooth and hasn’t been updated to its seventh generation like the Golf 7. It’s also the most expensive.

The Koreans have either a Kia Cerato Sedan or Hyundai Elantra. These two have stirred things up. It has taken two decades to create the stir, but now that the cream has been whipped, the Cerato/Elantra duos are the meringue on the Korean cake. South Africa loves them. Our roads are littered with these good looking and well equipped sedans.  They are reliable and well-priced, but more than that, they are hard to fault.

Toyota recently launched their New Generation Corolla. It the world’s best-selling car and it’s now not bad to look at. Like most of the cars in this play pen it is also well spec’d, but the 1.8 isn’t Corolla’s best option. Its 1.4 Turbo diesel is and it’s a cheaper option too.

So which car would you pick?

The VW is the best built, the Astra is the sportiest to drive and the best to look at. The Corolla is very well priced but its 1.8 isn’t the one to buy. That leaves us with the two Koreans. It’s all just so confusing. I feel like George Clooney at a strip club.

So which would you choose?