I am taking the Banksy view on this

I am trying to work out the hierarchy of Joburg's street people, prompted by my ongoing fascination with who is outside my car window. This is Joburg and the cast is carnivalesque, a constant reminder that no matter your state of privilege there is no getting away from poverty. If you have a car, there you are cocooned in your own thoughts, listening to the radio or occupied by a cellphone call and thinking it's a private moment when a knock on the window calls attention to a man draped in cellphone chargers, or holding a large box of fruit that you don't eat or wielding a soapy-filled water bottle and a squeegee and hellbent on cleaning your windscreen (in the North it's Grayston Drive offramp, in the east it's the corner next to Eastgate Mall) milliseconds before the traffic light changes. (In my hierarchy, the window-washers occupy the lowest rung because after having had a smash-'n'-grab (there's even a neat phrase for it) years ago I get panicked when someone lies across my line of sight).

In this city begging is an art. It involves different begging styles, each with their own nuances and signs. There's the man with the coffin on his head (truly) wearing what looks like a doctors jacket as you turn off Oxford Road to Joburg's swankiest shopping centre, Hyde Park Corner. At the mall a man lies in the busy intersection (making you close your eyes in horror as you watch the rush of cars navigate around him). In Rosebank's Bolton Road it's the glue-sniffers at main corners while a few weeks ago I noticed that three beggars in three different parts of town had the same wording on their signs (a cottage industry perhaps?) that read "Hungry boy ...". Saying that I have noted the disappearance of men trying to force boxes of condoms at me at the traffic light (Great. they ranked 1 below the window washers). 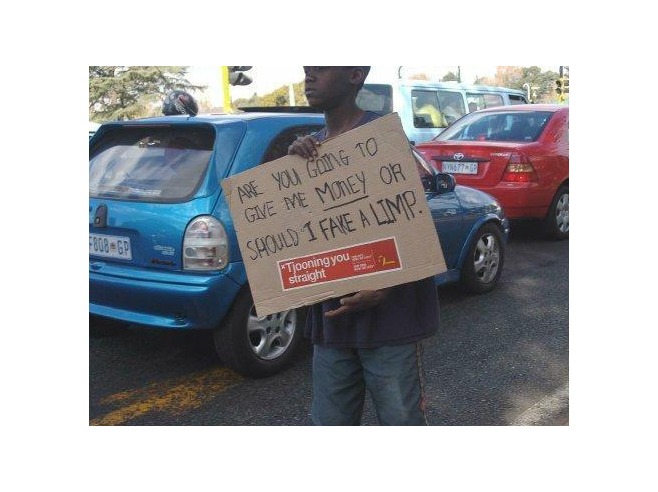 Then there are the attempts at humor "My donkey has been arrested for eating Robert Mugabe, my dog ran off with my chickens" signs, the guy with the sign "Too lazy to work, too scared to steal. Please assist" and the very cross-looking man on Westcliff Drive trying to sell pamphlets full of jokes. I really liked the Homeless Talk approach of creating newspapers and newspaper sellers until three different Homeless Talk sellers - on spotting the most recent edition in my car all rubbed their bellies and looked pleadingly - and in so doing undid the point of selling Homeless Talk in the first place. (It's a "please clarify moment. Are you begging or selling? You are confusing the driver.")

There are the blind begging pairs and the men who hold up black garbage bags entreating you to clear your car of garbage. There's the cross-dressing pancake-makeup faced mime artist in Parktown near the bridge and the very old man sitting outside the Nelson Mandela Children's Foundation in Saxonwold who has tragically made his home under the tree. We see him most Fridays, driving to Killarney, and often drop off a parcel of food and then wonder out loud how he came to be left sitting outside one of South Africa's most charitable institutions - to which the 10-year-old once responded "Don't they know he's someone's children too". 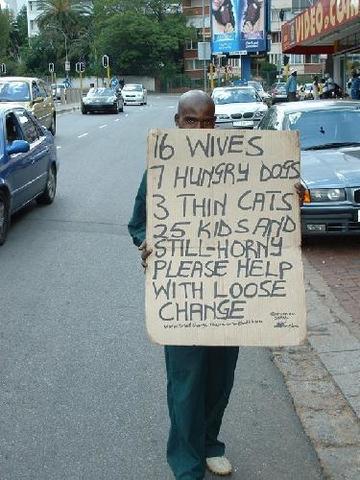 (On Corlett Drive. This photo is from the Funky Doodle Donkey blog. Link at the bottom of this post for more photos). Then there are the beggar stroke confidence-tricksters like the enormously large lady who I have spotted lying perilously across Oxford main road, a crumpled-up prescription for diabetes medication strategically placed near her seemingly unconscious body. The first time I pulled over, helped her up, drew a crowd, gave her what cash I had - the second time I saw her (a few months later) in the same spot I had evil thoughts. At the Jan Smuts Ave traffic light near Dunkeld there's a fresh-faced kid who begs for school shoes so he can go back to learning (they must be piling up somewhere because I am sure I am not the only person to bring a new pair - and one month later he tapped my window and told me the same story. He should have asked for a PlayStation.) He ranks just above the window-washer because of this. Once I asked the one-armed man where he had been after noticing his absence from a corner in Chester Road, Parkview for a few weeks where he begs. He told me "I was on holiday". I said: "You look relaxed". Another time when someone I know extremely well said they were sick of car guards I caused a fight by saying "If you're sick of car guards, you are sick of life - in Joburg. Why don't you just immigrate". On that note my favourite car guard has to be the elderly man in Parktown North who scores enormous tips by complimenting my parking skills for the benefit of the street's cafe society. It's a tough one - and I still haven't figured out how to approach what has become an ever-increasing phenomenon (especially as December approaches). My strategies shift between keeping a pile of change to handing out fruit, clothing and food at traffic lights. I have been accused of creating "co-dependency" and have argued over whether to give just enables the pattern, but I don't see how pretending people don't exist is in any way a better solution. I also don't think it's a life one would choose to have if given other options. Plus a city without compassion isn't a city worth living in. But of course it's tricky, and it's loaded, with the city's racial history, and social inequity and the sheer shortage of skills and jobs. Maybe it's easier to give and then just drive away but I am constantly reminded of the movie "Crash" where seemingly unconnected stories are linked by chance encounters in a disconnected city much like this one, and meaning must be made of them.

* There's are more great photos posted on the Funky Doodle Donkey blog. I have also used a photo from the VirtualTourist.com

Brilliant! Don't think I can drive past a beggar without thinking of you now :)

My favourite of all is the coffin head guy on Bompas.

A great piece, thank you.