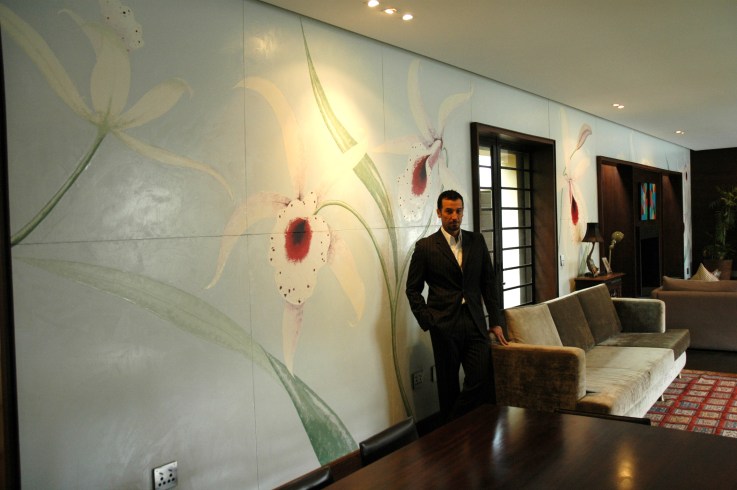 We had the opportunity of chatting with one of our favourite artists.Johannesburg based Yiull Damaso invited neofundi into his world of art- sharing his experiences, his process and his love for art.

What inspired you to become an artist?
While travelling through France on my way to Italy, I stopped at the first Riviera town in France, Toulon. There happened to be a world sculpturing competition in progress. Ten huge blocks of Carrara marble being chipped away by ten artists representing their respective countries. On one side there was the Mediterranean ocean swarming with yachts and on the other side, coffee shops and bars filled with people enjoying life. I said to myself, why would anyone want to sit in an office when you could be doing this? I decided there and then that I would give it a go. That was 1992.

Did your family encourage your creativity?
Yes, my family did encourage and support me, although reluctantly at first.

What materials do you enjoy working with?
I love working with oil, it was five years into painting before I had the courage to try oil, my first oil painting being the “Dreaded Madiba” that I’m now well known for. I have started working with paint that has iron and copper filings in it which I then rust by washing over the paintings with acid. The iron and copper paint already exists, however the paint technique onto canvas and the control I have of the medium is something which I have developed. I have worked in other mediums, one of them I’m also well known for is mosaic. My Vespa is covered in mosaic mirrors- the entire bike! It looks like a huge mobile disco ball. I’ve ridden it to Cape Town twice so a lot of people have seen it. The bike even organised myself and Michela a free nights’ accommodation; yes there were two of us on it on one of those Cape Town trips. When I started painting I only used acrylic. I started painting murals and was named by Hazel Friedman (art critic) as South Africa’s top muralist in 2000. Lately I have started doing some drawings with a bic pen- you can see two Manga girls on my website in this medium. 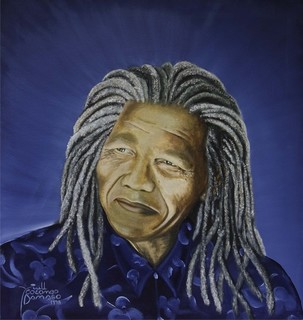 A question on everyone’s mind is about your Madiba art. Could you elaborate?

Madiba. The first image of him I painted was the ‘’Dreaded Madiba”. I was saying something about him, myself and people in general with that image. The title I gave it has its own meaning too. When I saw how people looked at his image it started my journey with him. Every painting I have done of him has very specific meanings, pertaining again to him, me, you... our society. The titles also have their own meaning, sometimes seemingly askew of the image depicted.

Tell us a little more about your nude/rusts and your Manga art.
My small rust nudes and my Manga girls are all related to my respect and admiration of woman. The rust, at close range is a quagmire of various decaying matter, some beautiful to look at, some not, but as a whole picture it is beautiful. When I look at women I see great beauty, however not all are made up entirely of beauty. We all have our flaws.
The Manga girls are showing in various ways, the power that women have. I depict them with heavenly bodies but armed like soldiers, insinuating they are not to be toyed with. 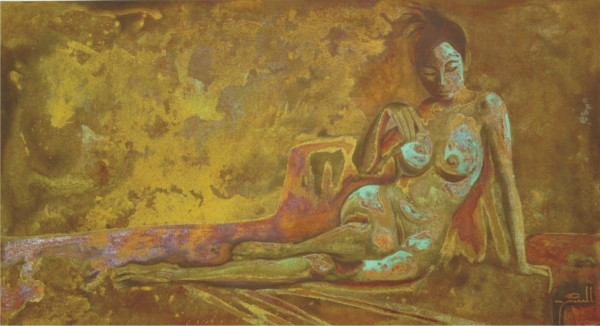 Are you attempting to evoke particular feelings in your audience?

With some of my work I want people to be taken away from where they are right now, if only in their minds and sometimes only momentarily, but away from any problems or pressures and stresses of everyday dealings. The other body of my work is designed to make you think about your role in the world and how it affects those around you. 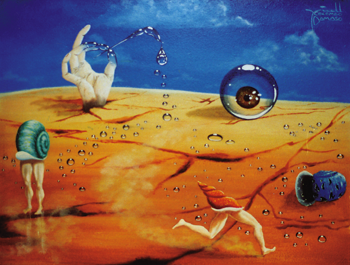 Please elaborate on the surrealism and symbolism in your art
My surrealist art is me indulging in my fantasy to be away from wherever it is that I don’t want to be. In those paintings and in fact all my work the subject matter depicted all has specific meaning. For example, eyes in various guises have made numerous appearances in my work. They represent my belief that we are being watched by something greater than us, Nature, God, karma, call it whatever works for you, but I believe we will have to answer for our dealings here on Earth. You have to look at each character in my work and figure out it’s significance.

Small exhibition on 20th August at my studio:

I hope to see you all there.

September – December Residency in Cape Town at Art in the Forest Gallery(Constantia)
I’m also working on another Madiba portrait, a perceived semi floating image made from Perspex and oil drop marbles. I’m also starting a body of work with the theme of creatures in cages.

I love your work, no formal training-you are a natural.

Your rust nudes are beautiful, would love to own one! will get in touch.