As a country we are proud to have Oscar Pistorius representing us at the Olympics. As a brand U-BOAT salutes their brand ambassador Oscar Pistorius Blade Runner!
The dedication and incredible fortitude against the odds has ensured Oscar a place in history. Already a Paralympic gold medalist, Pistorius’ ability has not been without controversy - initially banned from competing against able-bodied peers because many argued that his blades gave him an unfair advantage, he continued to strive toward his goal. “One of the reasons for doing the tests was proving that I’m in a sport and have the ability to run due to my own talent and hard work and sacrifices, and that was important for me. Looking back at that, I’m happy that we went through it.” Says Pistorius

In keeping with Oscar’s spirit he has been named brand ambassador for U-BOAT watches - Luks Group CEO Marc Hoffman, U-BOAT distributors is elated at placing the hottest time piece on Oscar’s wrist … U-BOAT understands the value of every second, which is why each watch is hand-crafted with meticulous attention to detail ensuring each time-piece is of the highest quality. Nobody is better suited to understand the brand ethos more than Oscar Pistorius who is also dedicated to making every second count both on the track and in life.
“Oscar is an inspiration to all South African's and millions of people around the world. He is showing us all how to live beyond our limitations. Oscar encompasses strength, individuality and inner confidence. The same values that U-BOATwatches stand for. U-BOAT South Africa feels privileged to affiliate with Oscar as he pursues his dreams.”

When U-Boat paired Oscar Pistorius with their 53mm CLASSICO Titanium Automatic Chronograph watch, it was a perfect match for the athlete. With Oscar being named one of Time Magazine’s 100 most influential people in the world for 2012, he was a natural choice as a U-BOAT Ambassador, for U-BOAT too continues to influence watch design and style around the globe. 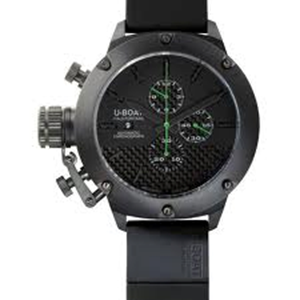