A man on a green bike

So this is my attempt at being green, as the world is rapidly becoming eco-conscious - from organic food, cosmetics… and even green clothing! No longer are these wholesome products for the exclusive consumption of tree-hugging hippies and new-age kugals, but for any person watching the news who knows the importance of looking after the longevity of the planet.

It can be debated why it has taken the motor companies so long to develop motorized transportation using a system other than the petrol combustion variety. I have my opinion and we all know money talks. With the world’s powers gravitating to any country that has oil reserves and petroleum companies being in the top wealthiest in the world you start to get the picture. But enough of my opinions and more about why I am the motoring guy for Voila!

Before you read ahead I need you to be open-minded. Close your eyes and think about Italy Roma. It’s a busy city and people are commuting from point A to point B in style; hair blowing in the wind and the sun’s rays bouncing off gold-wired wayfarer sunglasses. The sound of tooting hooters and romantic notions of people greeting one another, “Ciao Bello!” being chanted from one voice-box to another. It’s just like the taste of gelato on a hot day, it’s the perfect picture… But I must stop daydreaming and get back to reality. People in Europe use scooters and motorbikes in large numbers because they are extremely economical, easy to manoeuvre and quick to park. They are also relatively cheap to buy and best of all are budget-friendly to insure.

So what does this romantic notion have to do with South Africa?

Well I just went to the petrol pump and filled up my average-sized petrol tank and saw myself signing the credit card slip for R 635,32! It made me think what could be greener than a scooter? Diesel cars, if driven on long distance trips and under passive acceleration patterns are indeed economical, but in point-to-point driving in city traffic are less then earth saving. Hybrids are becoming more popular options now that they are not bound to rather fugly designs and clever components of engineering, which have been placed in much-loved product lines.

Porsche have tried this in the Cayenne and BMW in the 5 series, but these two cars power-outputs and price-points have nothing to do with being eco-friendly and more to do with ego boosts for their well-healed owners. I looked for an electric car and there aren’t any of those lying around our shores, though you will find them in some cities around the world. I visited Los Angeles last year and saw how shopping centres had created special parking bays with electric sockets for shoppers to plug into while they shopped. We all know Los Angeles is LALA land and I’m sure it will be no time before cars drive silently up and down Rodeo Drive in Beverly Hills.

With my head out of the clouds and back to my task at hand of offering a greener option for us city-slickers I decided to sample three rather simple yet very stylish scooters. I chose three because I wanted to get a better perspective of a variety and also feature bikes in three price ranges. I will start with the crème de la crème of scooters: the classic Vespa. The model in question was the S 150, retailing at R 52 950.00. Impressively built and imported from Pontedera Italy this, little gem comes in five colour options with the college model being my favourite, mixing the vanilla tones with tomato red.

This model has a 150 cc motor and uses the most fuel of the three scooters in this city shoot-out, and at approx. 4 litres per 100 km and 70 km per hour, granted it is the most powerful too. This scooter is for the super-stylish, for those who without question understand the heritage of Italian craftsmanship; having dual function as an artwork and means of transportation. The Tasha’s restaurant group to my knowledge have more than one, which is used as a marketing tool outside their restaurants in Hyde Park and Athol Square; they are the exclamation mark on being cool.

Our next contender is the Vision; a Honda Vision with a 110 cc engine and large-scale sales in Asia, this manufacturer mixes handsome lines with practicality. It’s a commuter model that needs to have global appeal, and with over 60 million Super Cubs sold since 1958 it’s not a niche bike like that of the Vespa. It’s built on a solid foundation of great Japanese engineering. The Vision is designed to bring joy to its owner. 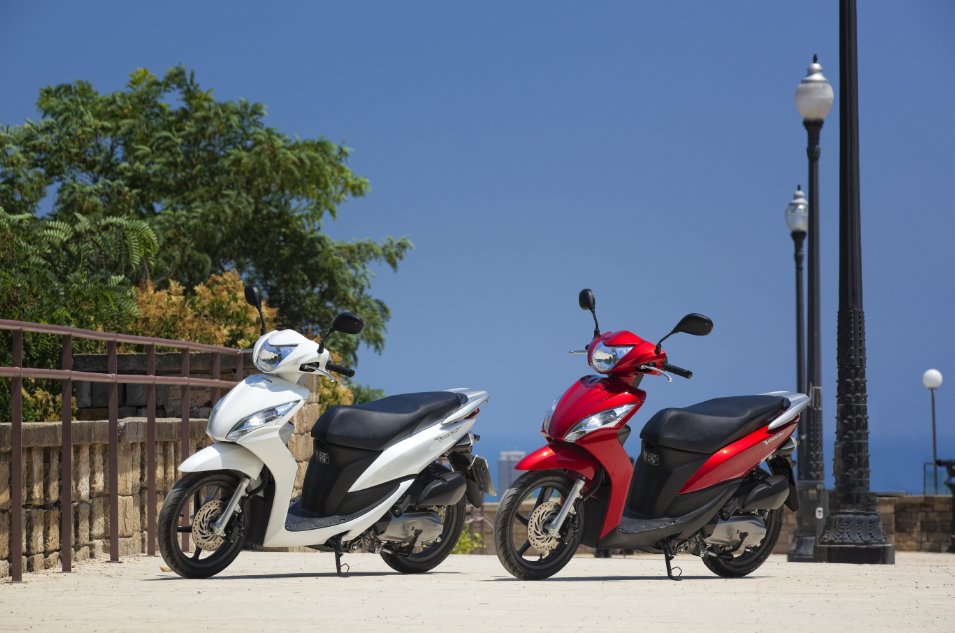 Focus is not on its looks but on its legs, and this little sprinter will whiz around traffic and up and down urban centres with an athletic undertone and sure-footed road holding.

Don’t get me wrong, the Vision is by no means unattractive - in fact the lines penned by its design team mimic those of a super-bike… but in mini form. It has been designed to be more than a contemporary scooter, focusing on the ergonomics and a comfy cushion for your derriere.

The Vision sells for around R 13 000.00, which is a hell of a lot cheaper than the Vespa, but the Vision is a scooter and not a piece of functional art, hence the realistic discount.

Our last traffic-cheater is the Big Boy revival 125 cc: this new brand to the South African market is all about clever marketing and packaging. This brand is brilliant! They have taken well-loved designs from a variety of manufacturers, put their big-boy spin on the final product, and retail it at class-leading low prices. The Big Boy revival 125 cc retails for only R 8450.00! That’s right: for the price of a ticket to London on economy class you can instead own a super-funky scooter. Best of all they come in 6 fun colour combinations – orange, powder blue, red, purple, white, and baby-pink.  This fuel buster uses a frugal 2.68 litres of fuel per 100 km at an average speed of 70km/h. 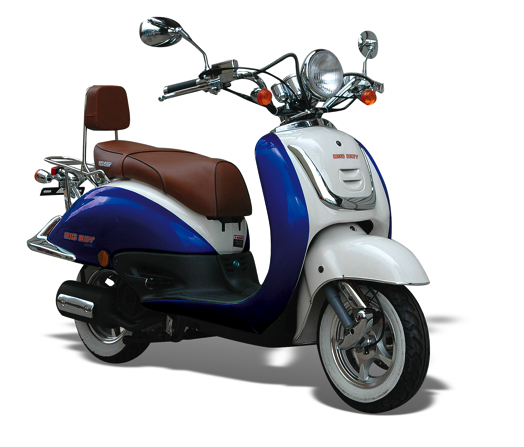 So is this the solution to global warming, traffic jams, and sky-high petrol prices? Perhaps not, but if you have the cash and want to look the part on the weekends, get yourself a Vespa! If you actually enjoy scootering around and have little need for highways get the Honda Vision. And for those who have a fantasy of scootering around for short distances and like the look of a cool vintage bike – buy the Big Boy!

Thank you! It is great fun writing the blog.

Inspired to buy one for my trips to the beach.