I recently reviewed Audi’s new A6 in 45 TDI quattro guise. A refined vehicle in every sense of the word that positions the A6 range beautifully within its class, while borrowing strengths from its competitors and combining them into a hybrid offering.

I now review the S6 range-topping model which is has an athletic focus. This begs the question – is the “S” sport model a better incarnation of the car’s character or is it better left as a standard A6? Similar in many ways to the A6, with all the same vast technological innovations (which can be referenced in my A6 article here: http://www.neofundi.com/profiles/blogs/innovative-business-class-au..., but also different with particular custom upgrades.

The main custom piece of engineering is the S6 TFSI motor –  a 2.9-litre V6 331 KW and 600 Nm that is borrowed from its cousin, Porsche. An outstanding engine – quiet, powerful, and supremely refined albeit thirsty – is a trait the 45 TDI motor does not share. Despite its thirst, it manages to balance athletic sprints while maintaining a subdued character that is not brash but rather quietly accomplished. Like the 45 TDI, the S6 TFSI features an 8-speed gearbox. Again, another phenomenally engineered gearbox that is hard to criticise and beautifully suited to the S6. Interestingly, I would say compared to the mating of the 45 TDI, the 8-speed is better paired with the S6 – the gear changes are almost seamless and unnoticeable. 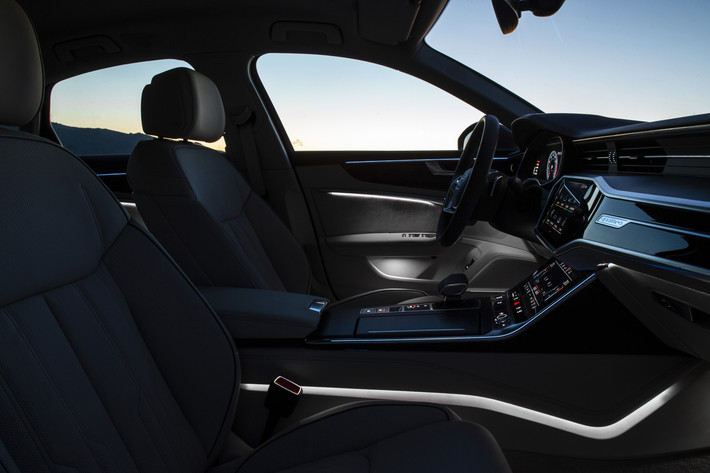 The A6 is easily the most comfortable vehicle I drove in 2020 and the same can be said for the S6 despite its suspension enhancements. The S6 features air-suspension, but conversely fitted with gorgeous 21-inch rims that are fitted with thin low-profile tyres and stiffer, lower suspension. My statement regarding comfort is a testament to the S6’s ride comfort, especially with the poor roads in Johannesburg.

Refinement is further echoed throughout the cabin’s insulation. Whisper quiet. Speaking of the cabin, this is a highlight of the car. Like that of the A7, the cabin looks chiselled out of rock. The dashboard floats sculpturally while being draped and clad in stitched leather, soft touch plastics and trimmed in chrome and aluminium. Moody lighting is concealed through the cabin thanks to the wonder of strip LEDs. The colour and light saturation are both adjustable. Say goodbye to traditional buttons and hello to two touchscreens with haptic technology – like that on your smartphone that mimics the action of pressing a button. These two screens control all the car’s large variety of functions, which are too vast to mention, as well as the climate control and car’s characteristic settings. The third screen, Audi’s Virtual Cockpit, which is now a standard affair sits perfectly above the new modern steering wheel that also features multi-function.

So, what is it like to drive? It is a great balance between the quality ride of the Mercedes-Benz E-Class, the athletic nature of the BMW 5 Series and the driving dynamics of the Jaguar XF. It slots in very well between all these vehicles as I mentioned in the beginning of this article. All rivals are more expensive, and the E-Class and 5 Series have very pricey and more powerful alternatives in their AMG 63 4Matic+ and M5 Competition models, both of which hold iconic status.

After five generations of A6 that spans the 26 years, the gap by which the A/S6 trailed its two German rivals, that gap is now so narrow and hard to define. When choosing between the A6, 5 series, E-Class or XF, preference and sales deal will ultimately decide.

The sad thing is that despite the excellence that the A/S6 and its rivals offer, this type of car – the large executive sedan – is no longer in vogue and consumers now prefer SUVs over this type of vehicle.