Despite being facelifted, in the quest to be better than ever, holistically, the BMW 2 Series is arguably the best car in the BMW range. Maybe the word ‘best’ isn’t the most appropriate adjective. How about ‘most authentic’? Flashback to 1966 when BMW introduced the 02 Series, when the car was labeled the 1600/2. This range of compact executive cars was produced for 11 years until 1977. It was monumental in ensuring the BMW company stayed afloat, along with the larger New Class (which was the start of what is the 5 Series range today). Eventually, the 1602 was replaced with the E21, also known as the first 3 Series BMW.

Enter the 2 Series, which in my opinion gives us a true taste of what once was its forefather, the 02 Series. This compact executive sports sedan is exactly what the Bavarian brand stands for when you think about their company slogan – “Sheer Driving Pleasure”. The 2 Series is sexy, comfortable, reassured, dynamic, quick and most importantly, fun to drive. Like a perfect cocktail of ingredients that are harmoniously shaken together rather than reluctantly stirred. The result is delicious. 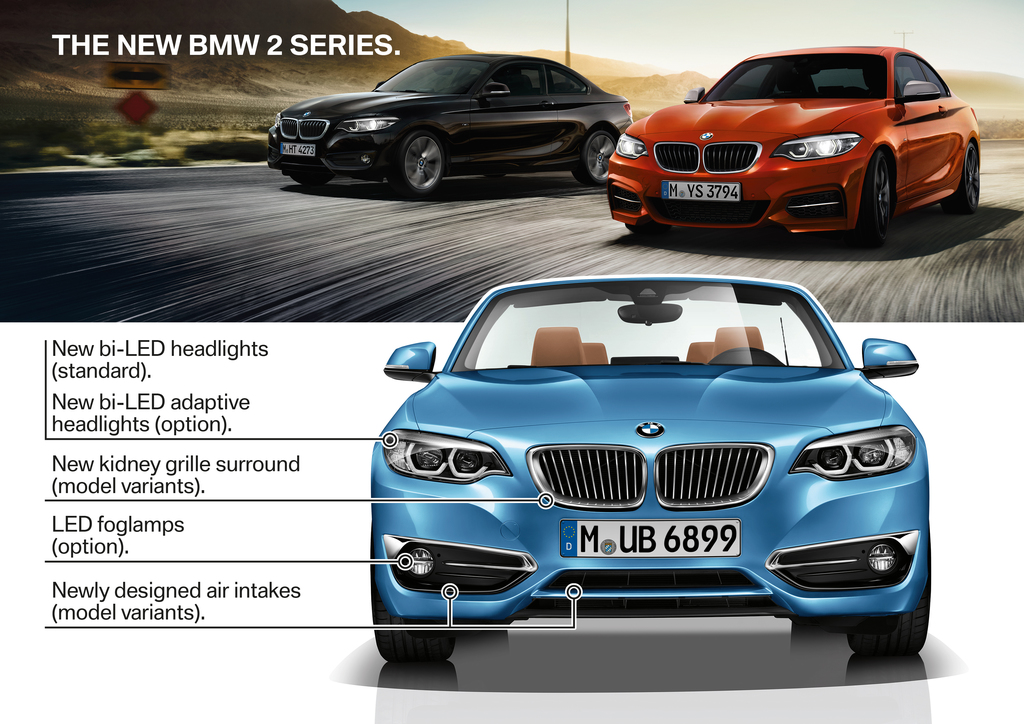 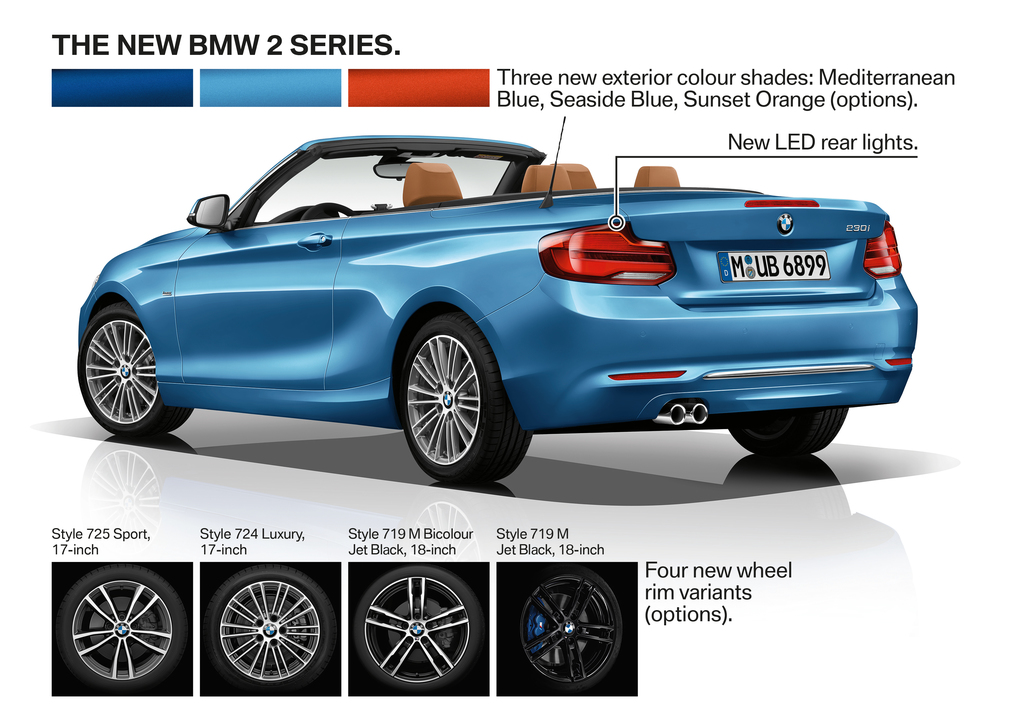 Recently facelifted, subtly so like a Kardashian make over – the tweaks have improved an already pretty face and rear-end. The front lighting clusters are now fitted as standard with bi-LED headlights. The familiar twin-circular-headlight look has a hexagonal interpretation, which ads to the cars dramatic entrance.  A larger kidney grille gives the front-end of the new models a wider look and allows it to project a sportier impression. The outer air intakes in the three-section front-end are now larger and emphasise the car’s powerful stance on the road. The rear-end likewise cuts a muscular figure, the single-piece rear lights (LEDs as standard) with hallmark BMW L-shape extending well into the flanks.

On the inside, there are further upgrades to the interior and appointments. The interior of the new BMW 2 Series models features an all-new design for the instrument panel, which emphasises the focus on the driver even more clearly and significantly enhances the cockpit’s quality feel once again. The interior now has a more spacious and clearer feel. The elegant design is accentuated by a host of details, such as contrast stitching and high-gloss black surfacing for the centre stack and the chrome elements for the control panels in the doors. New cloth or leather seat upholstery variants, interior trim strips in aluminium or fine wood, and high-gloss black panels with chrome accents provide even greater scope for individualisation. 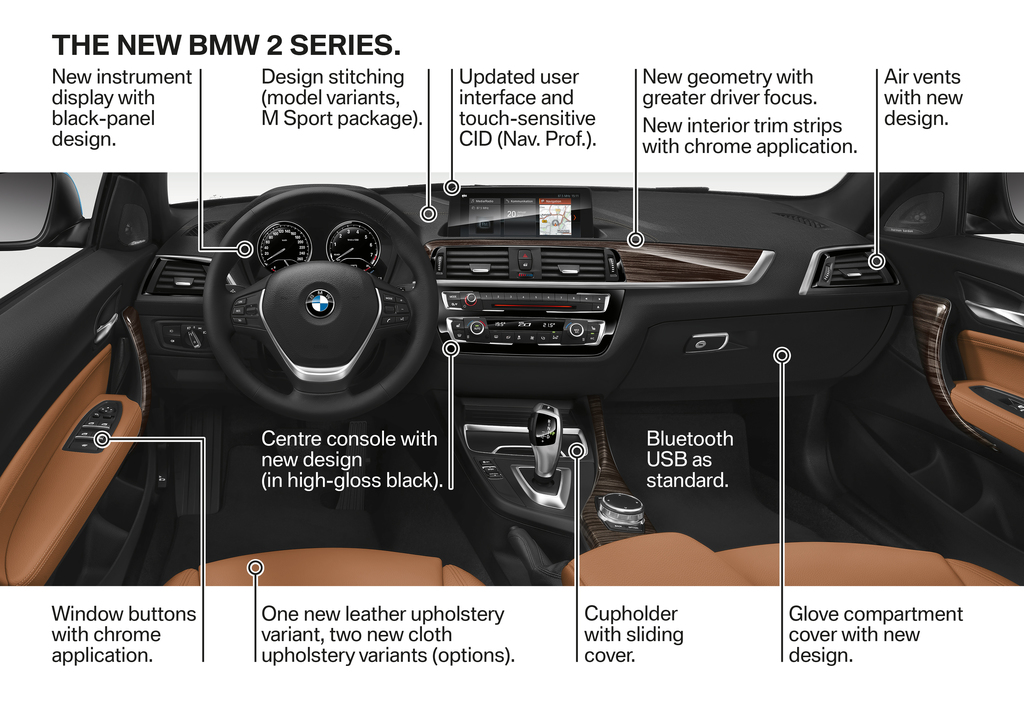 Aesthetics aside, albeit they have improved on a winning formula, the holistic recipe just works. The range is offered in three petrol engines: 220i (135kW/270Nm) with a 2.0-L twin-scroll turbocharger and the same but more powerfully charged 230i (185kW/350Nm). Next up is the M240i with a 3.0-L 6-cylinder twin-scroll turbocharger (250kW/500Nm). If raucous power is your thing, consider the M2 or recently launched M2 Competition which features the same engine found in the M3 and M4. On the diesel front, perhaps the sweet spot in the range, there is the 220d (140kW/400Nm). This engine also features twin turbocharging.

All these engines are mated to fantastic gearboxes – manual 6-speed or automatic 8. The rear-wheel-drive setup and front-wheel-drive are exactly why you buy a BMW – the drive is reassuringly sporty while dishing out loads of fun. Essentially a sports coupe, the 2 Series competes with the likes of the Audi TT and Ford Mustang. Perhaps a mix of the two – German Teutonic perfection and raw American muscle, the 2 Series never fails to impress.

The entire 2 Series range is great – I’ve driven most, bar the 230i, and can attest to their position as a sports coupe. Perhaps because I’m getting older, I value my money. I know that I’m in less of a rush to get to a red robot and hate wasting money on fuel and tyres. With that said, the lesser models are more attractive to me in everyday use. I’d have to flip a coin between the 220i and 220d as my choice, albeit the M240i would be my favourite. BMW Motorplan. All new BMWs sold in South Africa include a 5 year/100 000 km Motorplan maintenance contract. This covers all service maintenance and repairs resulting from normal wear and tear excluding tyres and fuel. As with any maintenance agreement, there are certain exceptions which are clearly specified in the Motorplan agreement. Repairs resulting from negligence or accident damage are not covered. For all BMW models, the contract distance can be extended up to 200 000km dependent on individual needs.