Ballsy to name your car after the earth’s highest mountain. Based on its namesake, Ford’s Everest has a lot to live up to in the adventure department then! So, let’s find out if it does?

The Everest is a bakkie-based 4x4, and one of two brothers. The first, and more popular, the Ranger. He is a big toughie. Built to withstand the hard knocks in life although he has somewhat of a softer ‘interior’ character. Good looking - in an all-American kind of way - the Ranger is casual in appearance. Like Jock of the Bushveld, in author James Percy Fitzpatrick’s famous book, the Ranger is a loyal partner when life gets hard. It is your reliable partner and loveable for its ‘do all’ character. The second brother, who is somewhat more sophisticated in the Everest, is possibly as tough as his brother but rather demure in expressing it. He has aspirations for the big bright city and although his DNA makes him a seasoned adventurer, like his brother, he’s built for both the urban jungle and wild west. His looks are ruggedly handsome – sporting a smart casual approach, he has space for seven and likes to think of himself less as a leisure vehicle and more of a sporty type, with great utility. 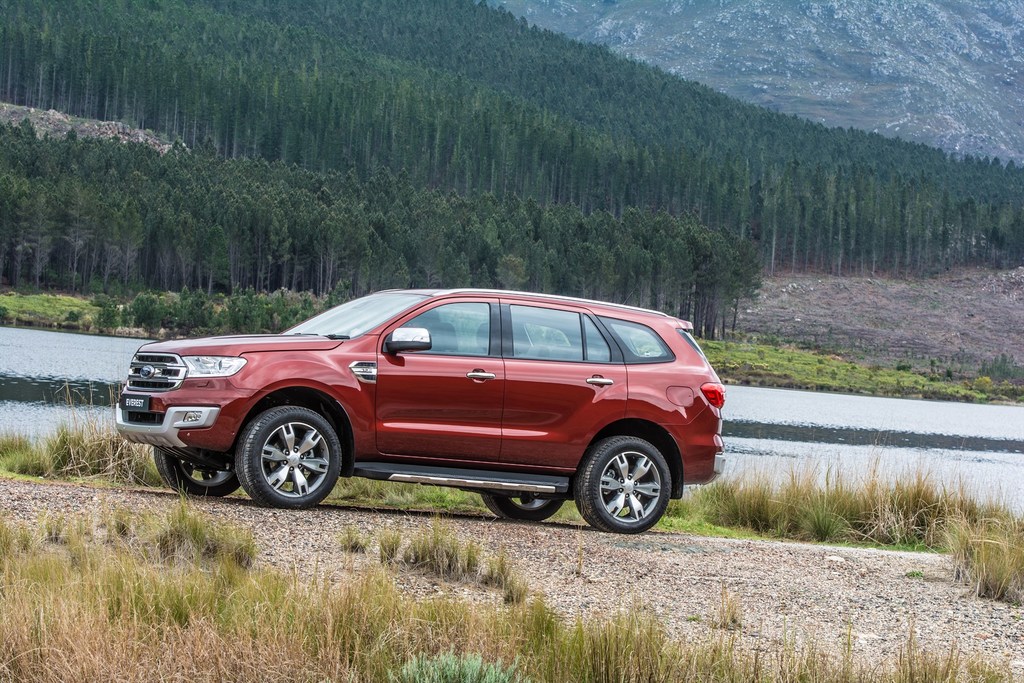 Everest also features a revised suspension system over the Ranger, equipped with a coil spring front and rear suspension and a Watt’s linkage on the rear axle. These are fancy names really that translate as a secure yet, supple ride that’s measurably better than that of the Ranger’s firm and somewhat bouncy one. 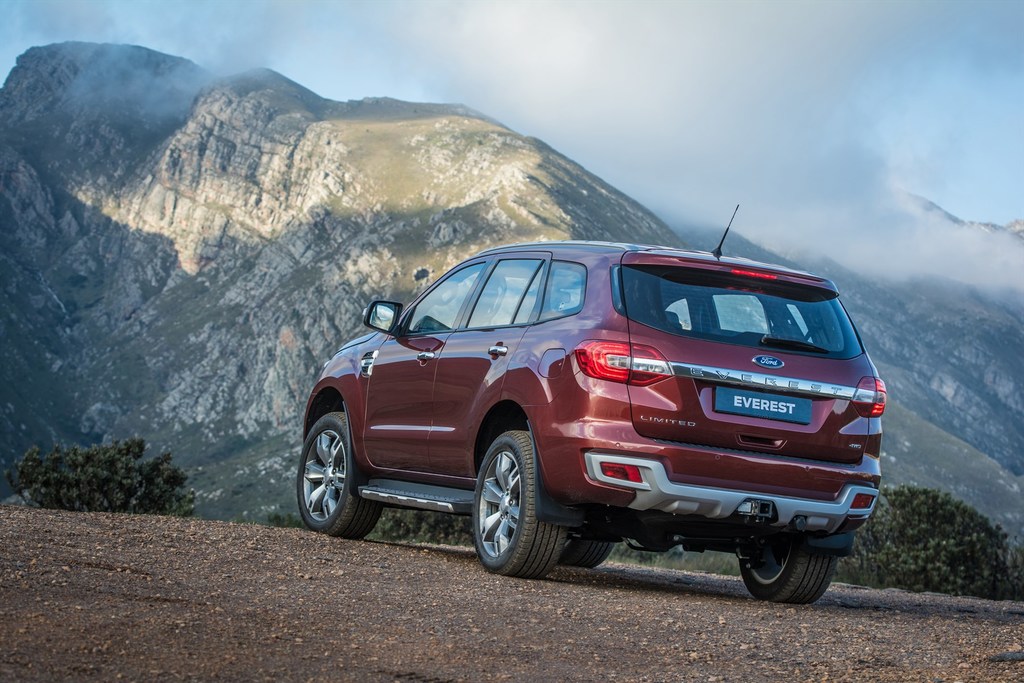 The Everest has been built to carry people as opposed to his brother who likes carrying stuff. A good thing really, because the Everest features a 2 + 3 + 2 = 7 seating arrangement – three rows of seats. Luxurious seating for all covered in a high-quality faux leather. There is ample head and legroom throughout, even adults up to 173cm can sit in reasonable comfort despite not being able to recline the third row. Open the tailgate rear to reveal the boot and there is a modestly sized boot that extends to handsome proportions once the third row of seats is reclined. An easy task that requires pulling on a toggle and voila the seats go flat and the boot becomes cavernous. 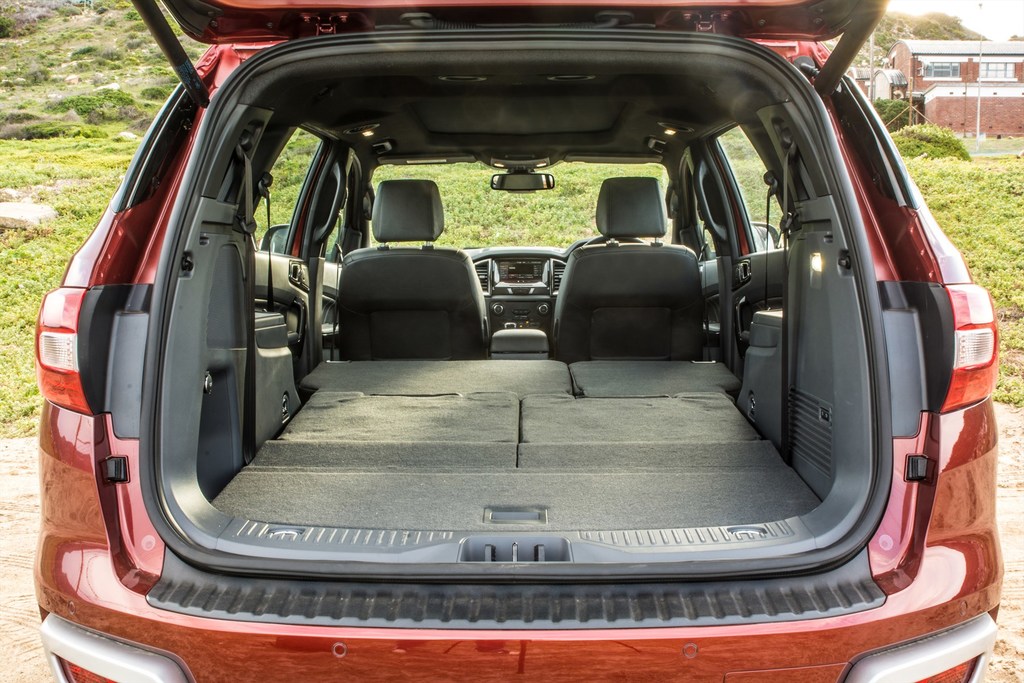 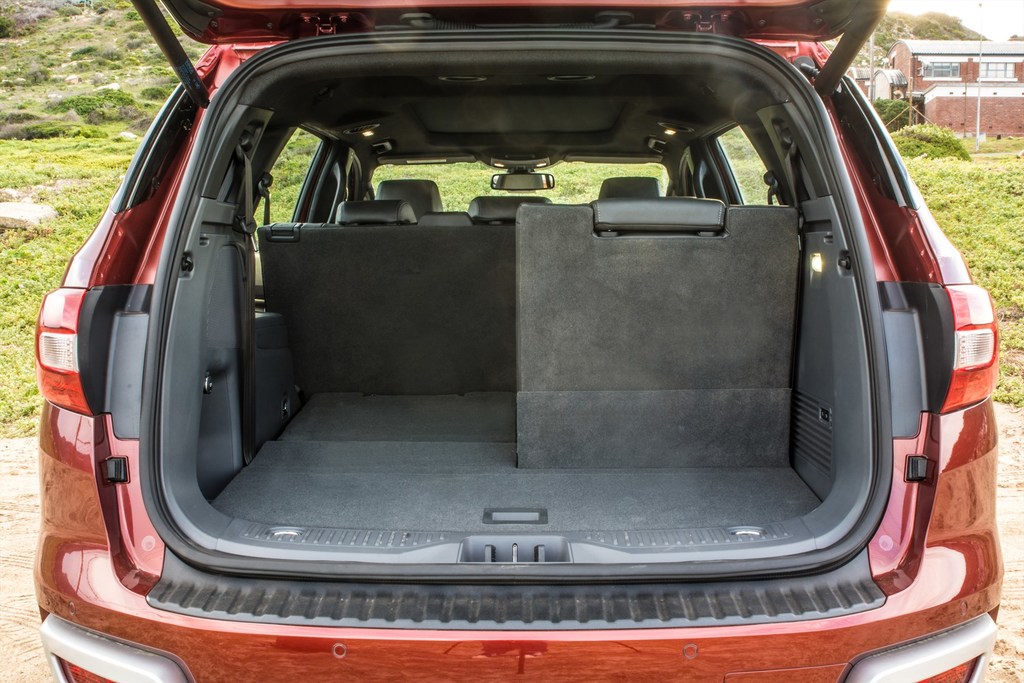 Both the Everest and Ranger are fitted with Ford’s 3.2l 5-cylinder turbo diesel engine. It’s a good engine, offering a steady flow of power (147kW and 470Nm), albeit not prodigious enough to be considered quick. Rather, it is always adequate. Refined when warmed, its thrumming sound from its 5-cyclinder engine ignites a gargle reminiscent of VW/Audi’s icon engines of the past. Quiet too and happy to rev but with the costly measure of a high fuel consumption – day-to-day city driving will get you a figure of around 12l/100km. Get on the highway and that figure will drop to around 10l/100km. The diesel engine is mated with a 6-speed automatic only gearbox. A nice gearbox but somewhat lethargic when compared to one from a high-end German SUV.

Not just for the city, the Everest is still a bakkie-based 4x4 making it very capable off-road. Taking the Everest from smooth tar to mad, rock or watery conditions is as easy as pie.  A rotator switch housed next to the gear selector allows for easy selection of these varied road surfaces. In fact, all aspects of the Everest are user-friendly – from the touch screen infotainment system called, SYNC®2 which allows intuitive operation of almost all of the cars convenience electronics. Another nice touch is the semi-electronic speedo binnacle that house a left and right hand sided interchangeable LCD screen. One can toggle through the options on the steering wheel. It is easy to use and up to date fanciness (I made that word up) that I enjoyed. 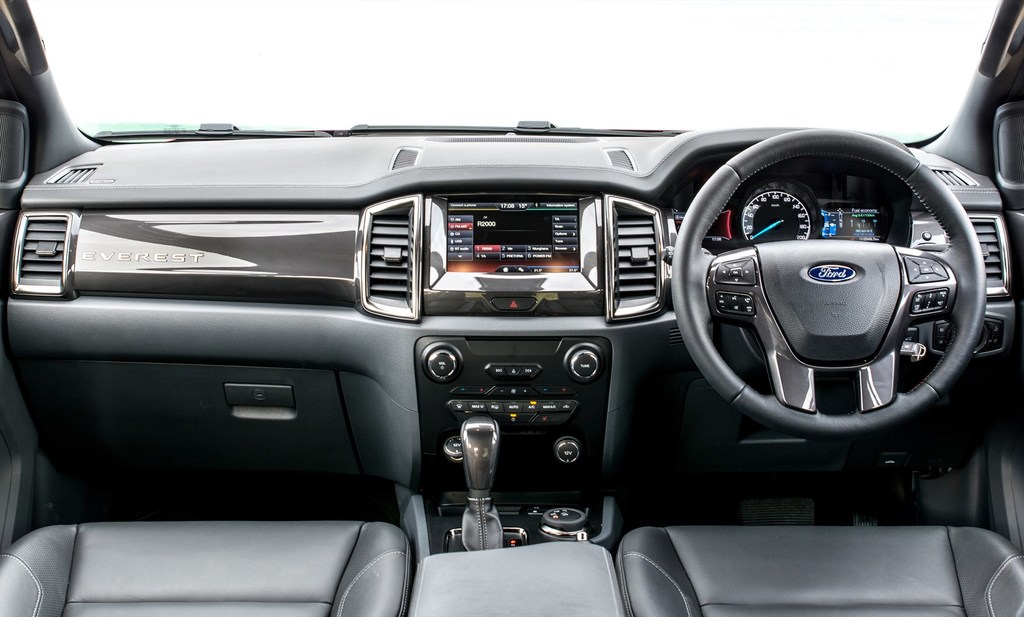 The Everest, unlike its brother, comes in only two derivatives and both only 4WD. The range topper Limited model has additional luxuries like electronic folding rear seats, sexy bigger mag wheels and other safety aids.

So, is Ford’s bakkie-based 4x4 the top? The pinnacle of highest feats? Hmm, its good, very good in fact but so is the cheaper Toyota Fortuna. Just as well I’m into looks because the Everest is arguably the better looking of the two.