The first word that pops to mind when I think of a Range Rover is regal. It’s the car of choice for kings and queens, sheikhs, premier league soccer players and Hollywood’s famous.

Up close and in the flesh it’s a big car. Luxury is its purpose, with fine detail being placed on every conservable creature comfort. If a Volvo makes you feel loved, a Range Rover makes your feel royal. It’s the big mama of SUV’s and it owns the road, commanding respect.

Land Rover products have never been sleek and sexy cars, not until the Evoque that is. The fourth generation Range Rover looks like it was chiselled and shaved from a huge block of granite, revealing interesting exterior styling details that, when observed, are beautiful all within its cube shape.  This cube penmanship gives the Land Rover/Range Rover brand its unique signature. The brand is less interested in fashion and more on refined tradition. The interior is a leather lined gentlemen’s club, fit for a king.  The finest materials have been blended together to create a look reminiscent of a first class compartment on a new A380 Airbus or the captain’s control room on a large and premium cruise liner. I could roll out far too many praiseworthy adjectives to describe the interior, coming across as verbose. So I’ll spare you and choice one- sublime. 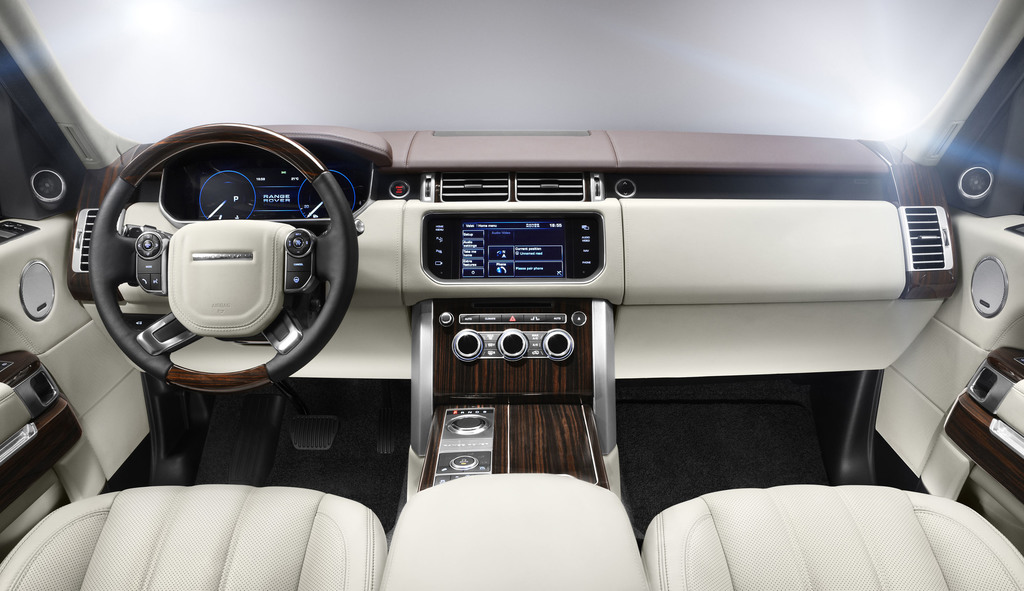 Driving the Range Rover is a different experience. You are very much removed from the normal sensations of the road. Potholes disappear and speed bumps are mere gentle inconveniences. No matter how chaotic the traffic, Range Rover's legendary command driving position rises above it. From the captain's seat, the raised view of the road gives a feeling of complete control and confidence.  Doing wonders for your ego, with your head in the clouds, life is but a luxurious dream at the helm or any other seat for that matter, in the Range Rover.

Range Rover’s fourth generation 4x4 limousine is actually between 350kg and up to 420 kg lighter than its predecessor. Though this would be like offloading four rugby players, it still doesn’t mean that it’s a light car. This big mama weighs in at 2 679kg, making her one big lady. This weight is unfortunately felt on the road. Should you feel like exploiting the supremely refined V8 diesel engine mated to a silky smooth 8-speed ZF gearbox, all is well in a straight line but hit a corner, and big lasses don’t do corners and bends like light and agile ones. They wollow and protest in disgust. The Range Rover is heavy because it is like an underground bunker equipped for the next world war. It is capable of almost anything and fitted with a huge selection of fantastic electronic aids to keep any young kid fiddling for hours. All of these electronics work in precise symphony, bar the complicated infotainment system that has a delayed response to driver input and can be initially confusing to navigate. Perhaps techno savvy kids would tiptoe around and master its layout faster than me.

The Range Rover is truly unique with little real competition, but there are some other considerations at the size and price. The S-Class Mercedes-Benz has been touted as a possible contender. It too is large and luxurious, being a firm favourite with politicians and royals. It is arguably the king of luxury but only suited for city and highway roads. Audi’s A8 4.2 TDI is also worth considering but bland by comparison.

In the 4x4 luxury stacks there is the GL-Class Mercedes-Benz. Big, mean and luxurious but lacks the road presence of the Range Rover. It too can be taken for a spin up a mountain path or a dice on the beach with it sophisticated all-road ability, but like the Range Rover will probably never see such terrain.

The Range Rover is expensive but very special. If old Liz, Britain’s current reigning monarch, has one then so should we all. It’s the King or Queen of the SUV’s!