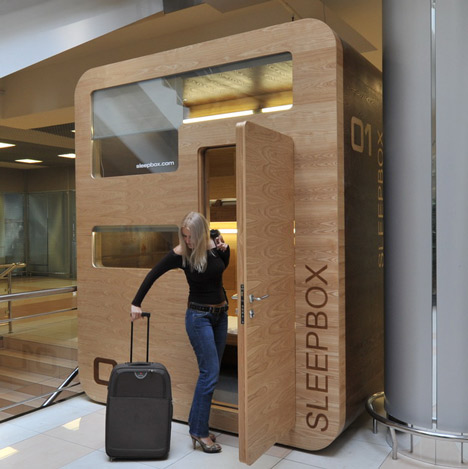 Russian architects known as Arch Group have completed the first small inspirational hotel rooms for sleeping at airports. Known as “The sleepbox”, this unit at Moscow’s Sheremetyevo airport contains two beds and can be rented from 30 minutes to several hours. The pod is inclusive of LED reading lamps as well as wall sockets for charging laptops and cell phones. It is constructed from ash-veneered MDF, but future units could be made from metal or glass-reinforced plastic. The sleepbox concept was and still is a popular story within today’s trending. 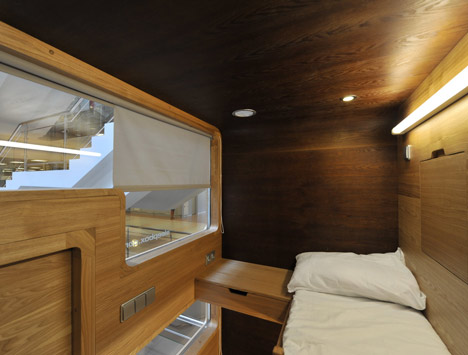 Imagine a situation where you are in a modern city, you have not booked a hotel and your options for comfort are scarce. If you want to sleep while waiting for a plane or train, you face many hygiene and security problems. “We believe that urban infrastructures should be more comfortable for one to enjoy relaxation on their trip abroad”, and for this purpose, we have developed Sleepbox. It provides moments of quiet sleep and rest without waisting time in search of a hotel. Possible locations for sleepbox include:
•Railroad stations
•Airports
•Exhibition centers
•Public and shopping centers
•Accommodation facilities in countries with a warm climate, Sleepbox can be used outdoors. The Sleepbox allows for unforeseen circumstances where one can spend a night safely and inexpensively, or even if you want to kill a few hours without leaving your luggage. It is a small mobile cubicle with a 2.5x1.6m base and a 2.5-3m height. One of the main advantages is that it can be installed in the airport “clean” zone, placed just in front of the gates. The main gates are where travellers spend most of their time, due to delayed flights or transfer. Currently Arch Group offers one, two or three-bed Sleepboxes, which can be made of MDF
(wood), metal and glass reinforced plastic. The price varies depending on the number of hours in use: the more hours the user pays for, the less it costs per hour. Its base features is inclusive of ventilation, sockets for notebook and cell phone chargers, space for luggage is under each bed, it has a nightstand and in addition to general lighting, sleepbox has built in LED reading lamps. The windows are equipped with electric-drive blinds, however depending on location, sleepbox can be equipped with additional features such as:
•Matted film on windows with changing transparency
•Mood lighting – LED lamps with changing light colors
•Built-in media block (TV, touch-screen monitor)
•Wi-Fi router
•Alarm, intercom
•Safe deposit box
•Built-in payment station with magnetic keys The first sleepbox was installed at the Aeroexpress terminal of Sheremetyevo International Airport, Moscow, Russia of Mid-August of 2011. It represents the base version made from MDF with a natural ash-tree veneer. It has attracted such a great deal of interest from travelers and big companies that chances are that these commercially operated booths will be installed at airports and in the city at the end of 2012.
Area: 4 m2
Architectural bureau: Arch group
Architects: M. Krymov, A.Goryainov
Design: 2009
Realization: 2011 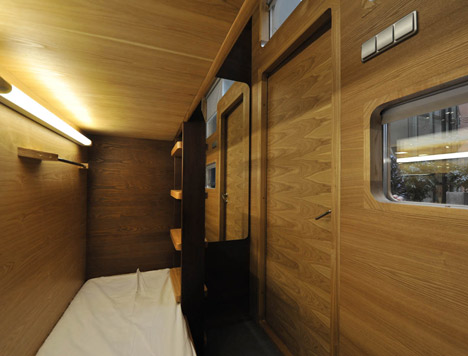 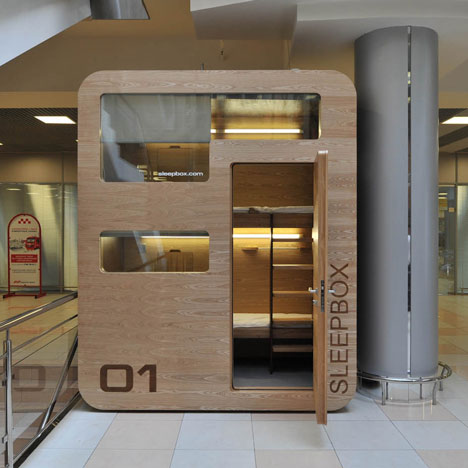 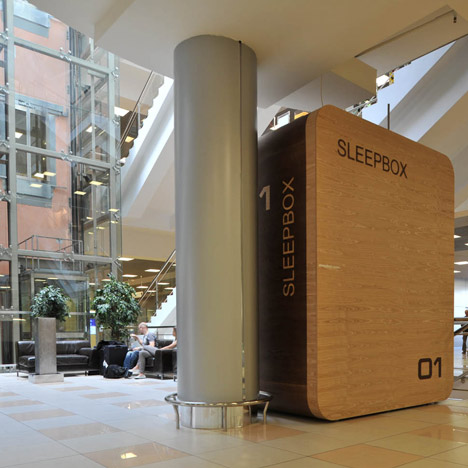