Lessening the Big Bang Theory for 2020

Did you know we South Africans lose approximate 14 000 people a year on our roads?

Sometimes we are either unaware or oblivious to certain facts that we think don’t really affect us. Well indirectly and sometimes directly we are affected. Annually the globe deaths due to road carnage are around 1.3 million people. Shocking fact! What is even more shocking is the fact that the country’s mortality rate of 28 per 100 000 citizens is one of the worst in the world. It is also the largest unnatural killer of children in South Africa.

We have an estimated population of around 50 million. Our roads travel like the vein network through the body of our country, travelling across nine provinces and stretching 720 000kms of tar, gravel and concrete.

A large percentage of our population relies on public transport of which 156 000 are minibus taxis. Monitoring the behaviour of drivers on our roads is approximately 17 000 traffic officers, 9 000 of which are Metropolitan police members.

The graph above reflects the comparison of day-of-week crashes between 2010 and 2011 which indicates, amongst others, an increase in crashes that happened on Sundays and Mondays. It further shows that during 2011 almost one quarter (24,16%) of the weekly crashes happened on a Saturday, and 61,27% of all weekly fatal crashes happened over weekends from Friday to Sunday.  Most crashes occurred between 16h00 to 22h00.

Listed below are 20 of the most hazardous roads in our country and a Google Earth map highlighting these roads as a caution. 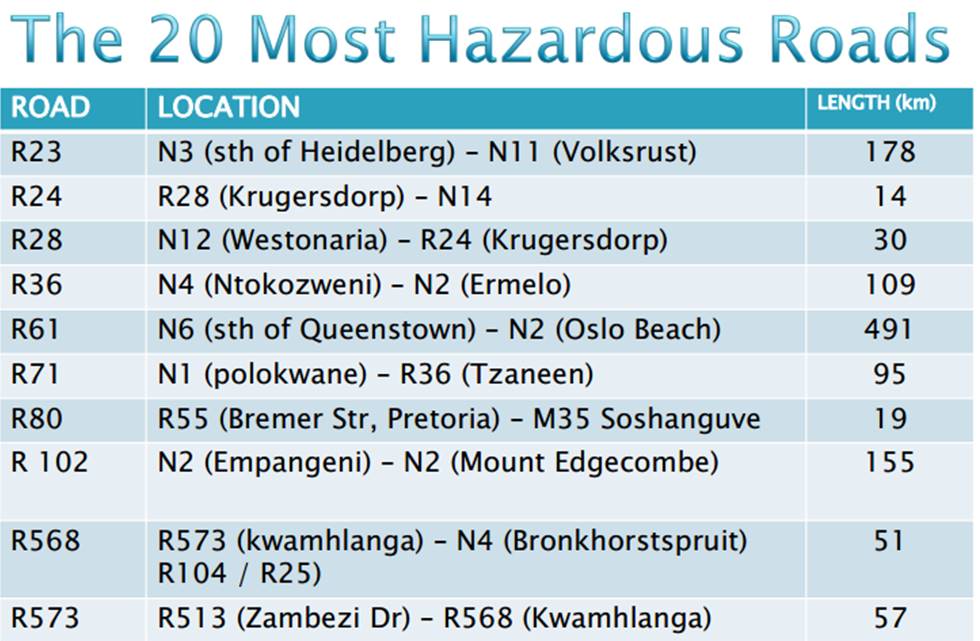 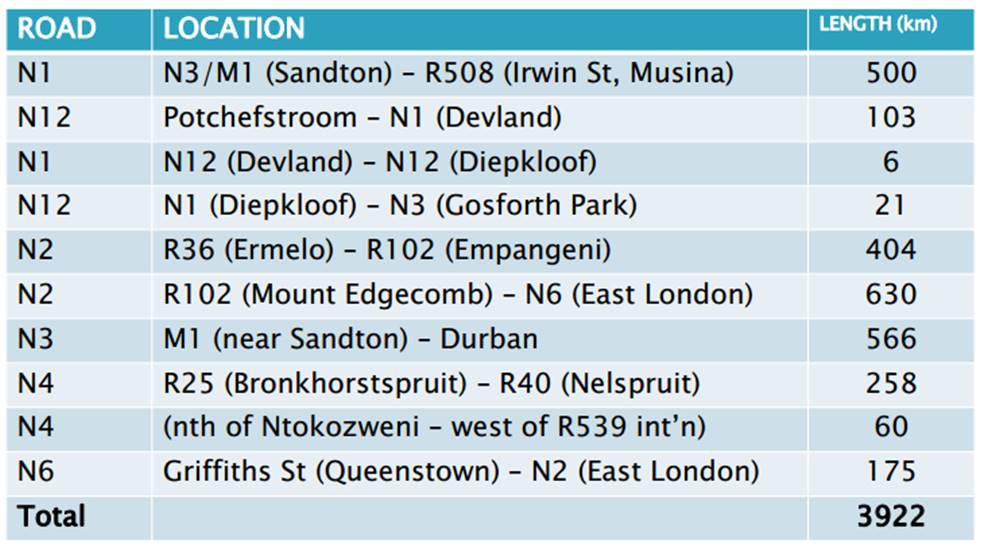 During weekends, 65% of all fatal crashes can be attributed to the abuse of alcohol by both drivers and pedestrians. Research highlighted that of the drivers tested for alcohol, 42% of those tested positive are women and 58% are male.

Abuse of alcohol is especially prevalent amongst the urban upwardly mobile, the youth and other age categories in general, who do so mostly because they perceive the chances of being detected as being very low.

Road crashes involving pedestrians are among the biggest contributor to fatalities on our roads.

Another interesting but shocking statistic in South Africa – only about 67% of front seat occupants buckle up for long journeys. The seat-belt wearing rate for short local trips is significantly lower. Rear seat occupancy rate is at a dismal 2% nationally. Research indicates that if the seatbelt rate for front and rear seat passengers is improved to 80%, there would be an automatic 30% reduction in fatalities.

90% of all crashes are preceded by one or more traffic violations, which means most crashes are therefore caused by human error, and this means it is an attitude and behavioural problem. The approach therefore requires decisive and vigorous, targeted and consistent enforcement.

So what is the plan to decrease these alarming numbers?

Currently the government is running a campaign called ‘Decade of Action’. The objective is reducing fatalities by up to 50% by the year 2020. The details of this campaign I am not aware of so can’t report, but the question begs: Are we geared to realise this objective considering that enforcement bears the bigger responsibility of reducing offences and casualties?

What can you and I do?

The facts don’t lie. Don’t drink, buckle up, watch out for pedestrians, drive as if your life depended on it and stop talking and texting on your phones while driving. They sound like common sense don’t they? So why don’t we follow these simple rules?

If it’s a party you are looking for, nominate a friend who will not drink and drive the group home safely. Better yet there is a great company called Uber who will send a driver for you via an app on your smart phone (www.uber.com).

Where your safety belt and ask those sitting behind you to do the same. A passenger sitting in the rear without their belt on is likely to injure or kill the front drive and passenger.

Keep calm in a car. Taking out your frustrations and letting your ego go wild in your mobile tin can is asking for trouble. Enjoy your drive, listen to the music and look at the view. You’re missing out on the good stuff and getting irritated for nothing.

Most modern and new cars come standard with Bluetooth- connect it. It takes a few moments and you will never need to pick up your phone while driving again. It will connect automatically every time you enter the car.

If you need to text someone, stop and do so. It only takes a second to cause an accident if your attention is diverted. Your message can wait, would you prefer knowing that you killed someone because you were texting, rather than waiting a few minutes to reply?

It is easy. Discipline yourself and drive safely.

*Facts and figures have been drawn from the Road Traffic Management Corporation presentation to the Department of Transport Republic of South Africa.