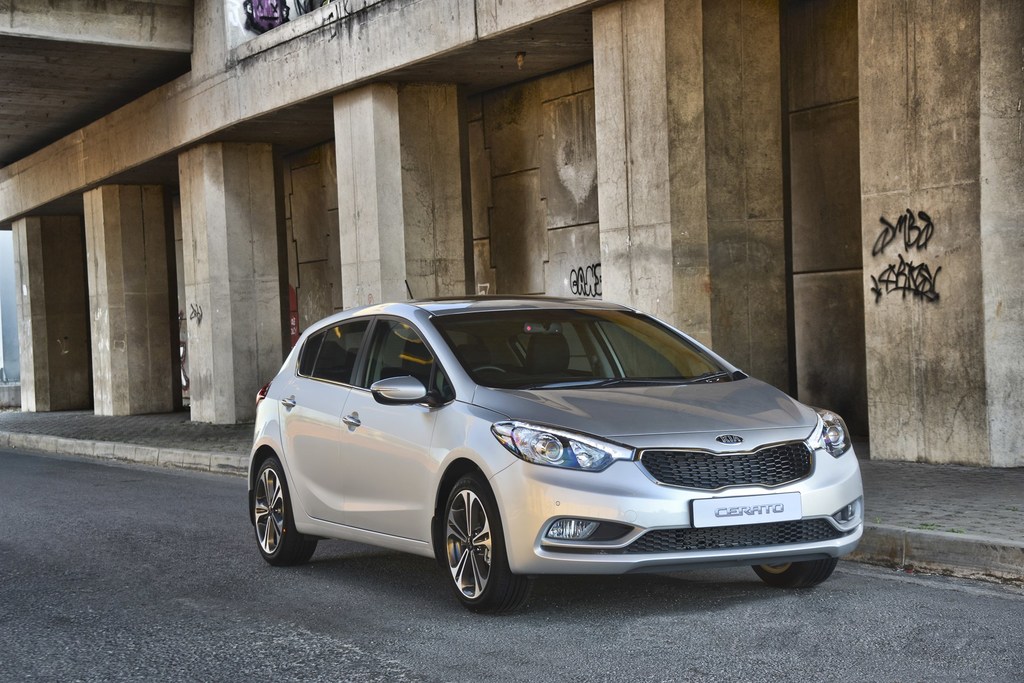 The world is changing at an alarming pace. Two year old kids are hooked on iPads and people are looking to twitter before TV and radio for breaking news. For decades we believed that Germans made the finest cars, the Italians the most adorned clothing and the Americans the fattest people.

Well things have changed. No longer can we rely on old preconceived ideas - to quote the band Keane’s 2004 hit ‘everybody’s changing and nothing stays the same’.

The Kia brand is a good example of that, it has been around since post WWII. Its name translated from Korean to English is a positive affirmation and a true testament to where they have come - ‘rising out of Asia’. Initially manufacturers of bicycles followed by motorcycles and then trucks, but only forty years ago started making cars in the 70’s.

I would like you to consider the concept of time, experience and the effect it would have on a finished product. Mercedes-Benz has been making cars for over 125 years, though excellent and in many cases class leading product, they have had decades to create such a brand. Kia on the other hand has had 40 years. Less than one third of the time Mercedes-Benz has had. Does that mean a Kia is a fraction of the car Mercedes-Benz is? No! For one the two brands are not direct competitors, and the second reason I will elaborate on further…

One only needs to look at the cars on the road to notice Kia’s increased presence (this could be attributed to their Eurocentric design and value for money pricing proposition). As a result, nicking market share from their competitors. The Kia Rio is a compelling choice in the compact hatch and sedan market with funky design lines and dynamic packaging. If you require something larger, Kia offers the mid-sized Cerato sedan and hatch which was initially launched in 2011 and was superseded in October last year. Before taking delivery of the Cerato 1.6 EX hatch I had little expectation of the car, perhaps because its understated European styling was less outlandish than other hatches in the market and more conservative than its little sister, the Rio.

After a week with the Cerato hatch I was impressed, and hard-pressed to fault the car.           R235 000 gets you a family sized hatch that will seat five, has a boot big enough for a month’s worth of groceries and returns an average fuel consumption of 7.8l/100km. This fuel figure is claimed and is the first time I have matched a stated figure (which are usually conservative exaggerations but potentially achievable if you freewheel downhill). 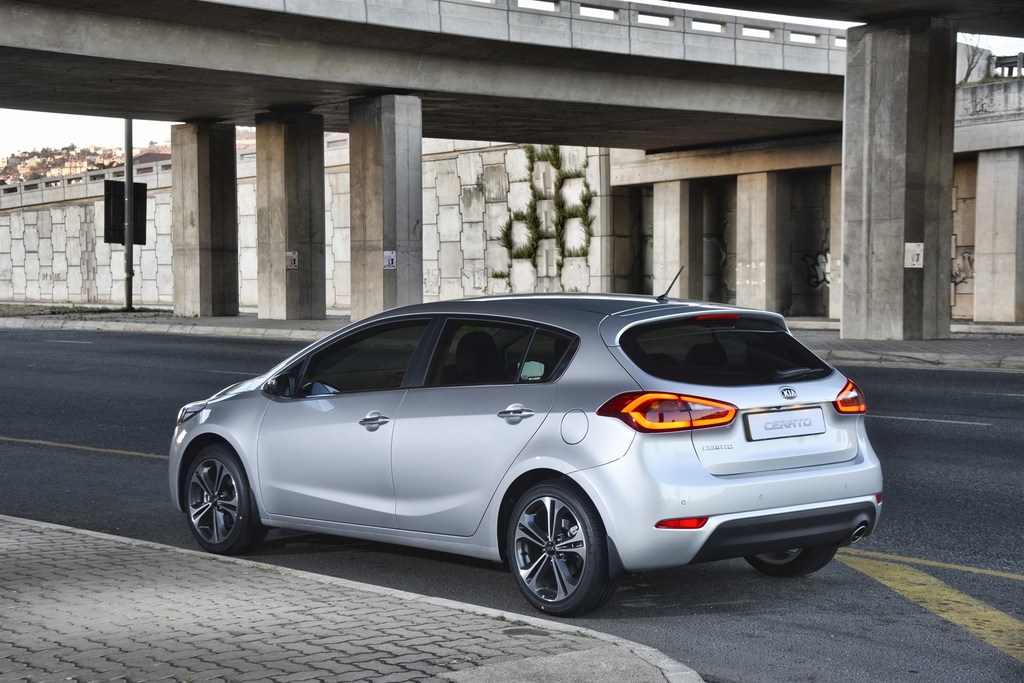 The Cerato has a zesty 1.6 engine that comfortably maneuverers the Cerato in city traffic and keeps up with the pack on the highways. It’s not a hot hatch so don’t expect to outpace the GTi at the robot.

The Cerato has a 6-speed gearbox that feels precise, sporty and lightly weighted for ease of use. The ride and handling are reassuring. It feels comfortable on the road and ready for cornering duties, while being able to soak up poor road quality with ease.The cabin is a well insulated and aesthetically original.

The use of materials is funky without compromising on quality and includes an expensive list of standard equipment that is ‘nice to have’. 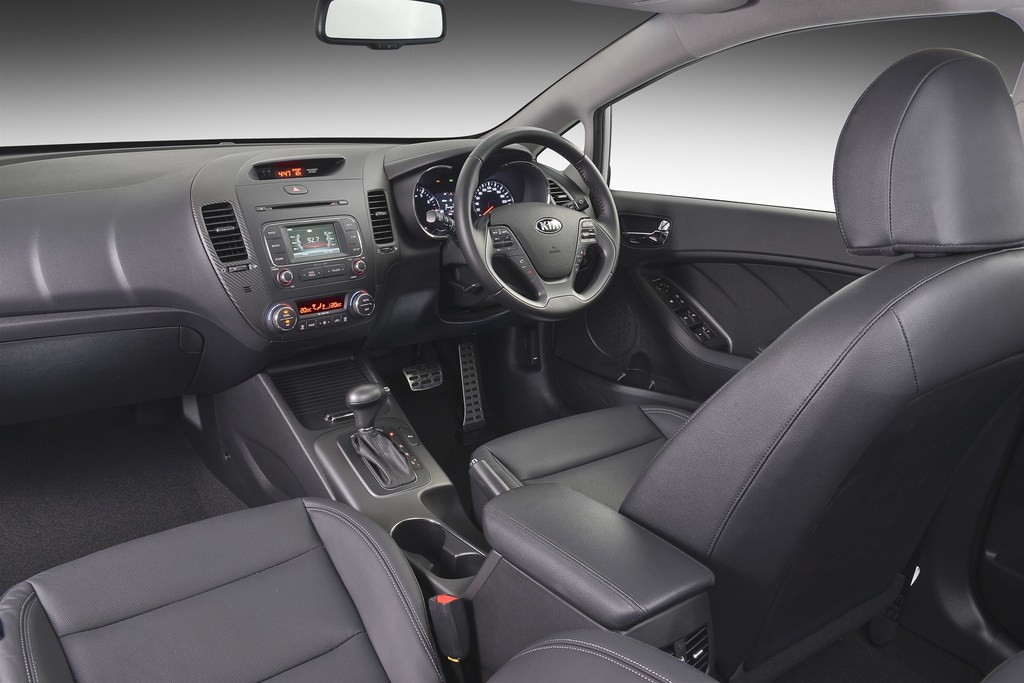 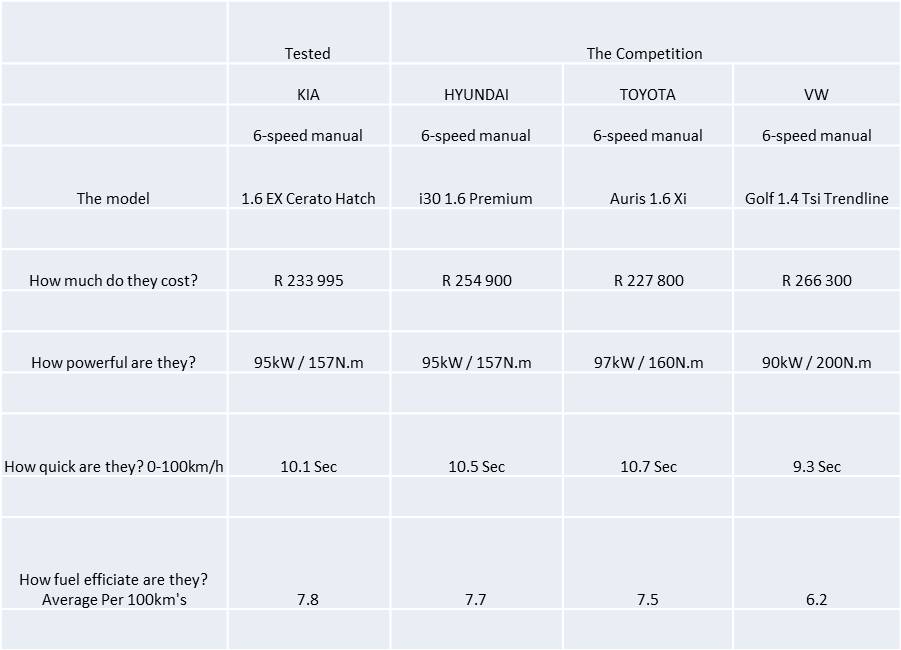 The Cerato can boast a 5 star rating in the EuroNCAP crash test.

The Kia Cerato is a great car. South Africa’s leading motoring magazine ‘CAR’ placed the sedan version of the Cerato above the New Generation Corolla and Hyundai Elantra. It’s an understated yet accomplished choice in its segment.

The VW Golf is a fine car which showed in this year’s Car of the Year competition, in which it placed second after the Porsche Cayman S. The Golf suffers the label of being ‘bland looking’ but is no doubt exceptional. The choice if choosing a Golf is an additional R34 000 though.

Take a Cerato for a drive, it will surprise you like it did to me!