It’s a Fusion of Jazz and Celerio And I’m not talking about a new restaurant’s delectable haute cuisine.

As 2015 begins, so too does the flurry of new cars being launched within the year. Though an economic ‘go-slow’ still dangles, much like a hip-hop artist’s jeans over his undies, South Africans still bought 440 000 new cars last year. Though this figure sounds impressive, it’s actually close to the one of the previous year – a reflection of little to no growth.

Word from the spectrum of motor manufacturers outlines over 80 new models ‘being born’ this year. That means on average there will be seven new models taking their first tyre rolls on our blemished asphalt each month.

This means one thing, choice! Long gone are the days of either this or that. It’s a smorgasbord, with manufacturers creating new categories and niches with niches – it has never been easier to remain an individual as a car buyer. The glass is more than half full in 2015, having a Norman Good Fellow’s selection of the finest to put into the glass.

The year has begun with a bang: Ford launched their flagship Fusion; Honda has an all new Jazz; Suzuki introduced their Alto replacement, the Celerio; Mercedes-Benz has facelifted their B-Class just in time for its competitions arrival, the BMW 2-Series Active Tourer and Mercedes-Benz added the 65 AMG to their S-Class range.

Unable to savour all four wheeled creations launched, I sent my colleague, Luke Heydenrych, to his hometown of Durban to take the Suzuki Celerio for a whirl around the sugar fields of Natal, while I went to Cape Town to try out the Ford Fusion and Honda Jazz. 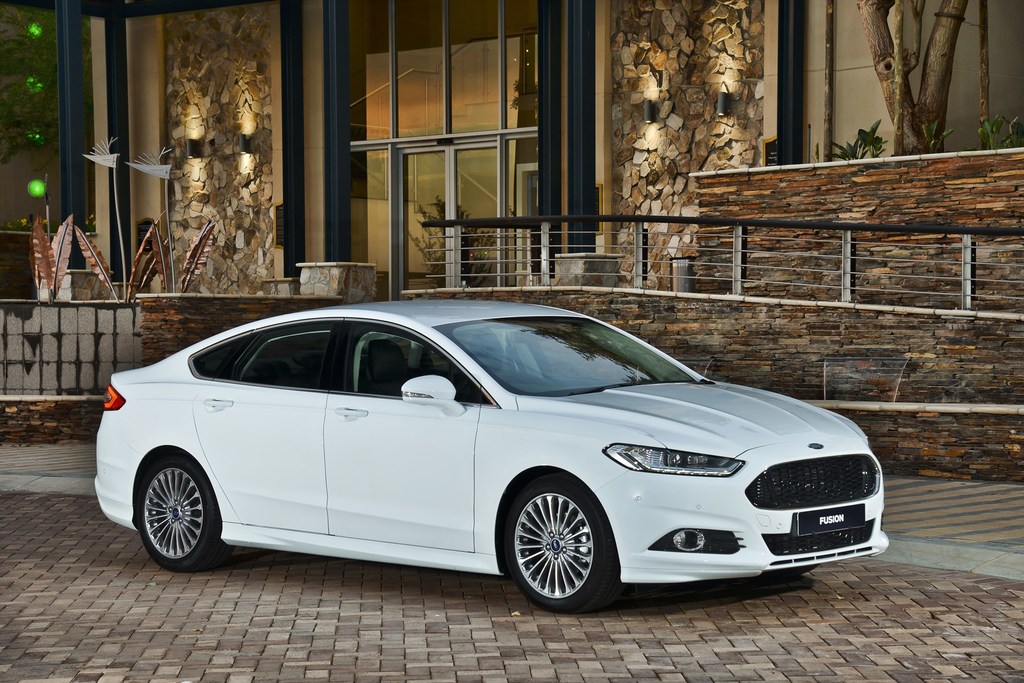 It’s always a treat popping into the city voted by Times Magazine as ‘The No. 1 of 50 Best Places to Travel in 2014’. It’s a city I’ve visited more times than I can count, yet still in awe of its visual grandeur. My midweek escape began by being welcomed by Ford’s Fusion. The Fusion, also know globally as the Mondeo, is now Ford’s flagship passenger car. Being a flagship vehicle, Ford haven’t held back. The Fusion/Mondeo is now in its fourth incarnation since its original debut in 1992. The new local naming is rather apt in my opinion as the styling is a mixture of dynamic design elements. From the front (the Fusion’s most vivid angle), Ford has been able to create a striking look that elevates its perceived cost – looking like an Aston Martin. The rear harnesses the swooping ‘Jaguaresque’ profile that completes the overall design fusion into a contemporarily style, reminiscent of a Peter Schreyer (Design Chief for KIA and Hyundai) creation. It’s simply gorgeous. 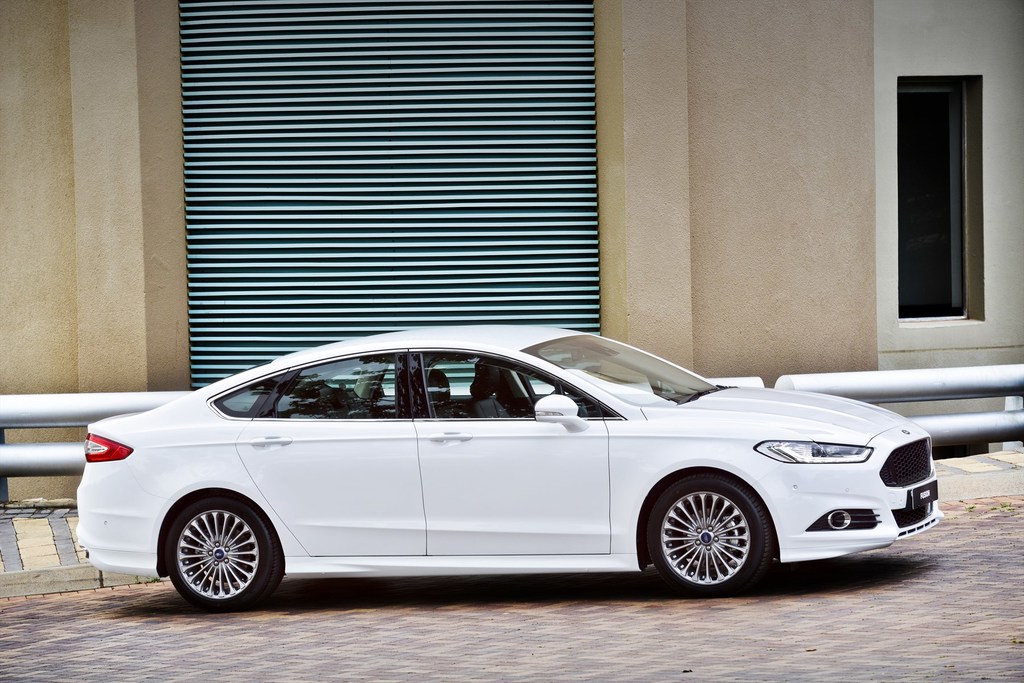 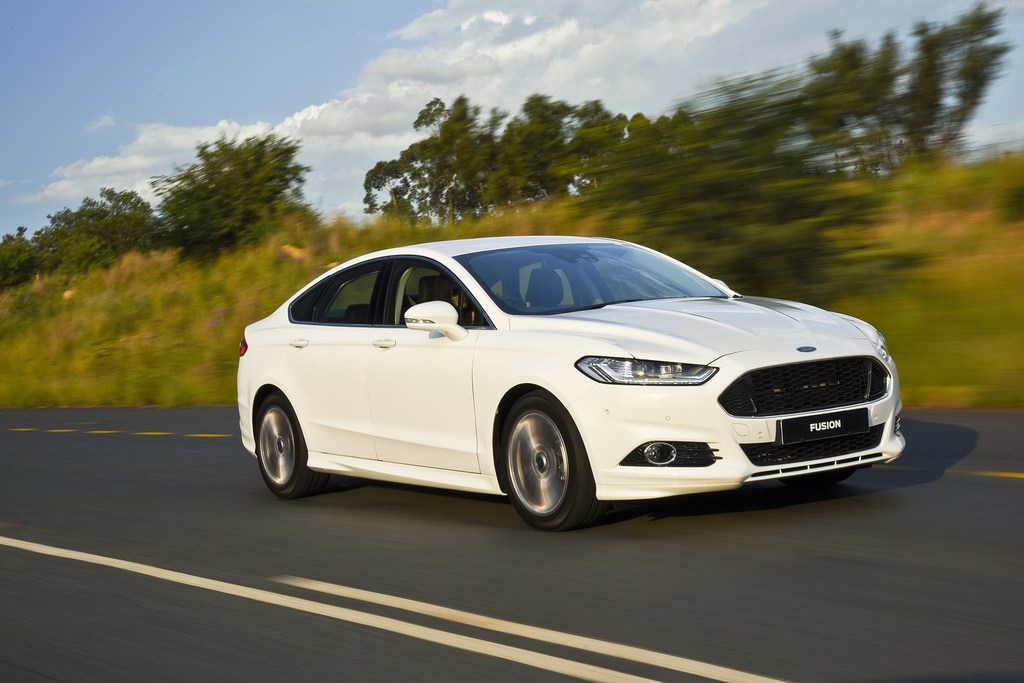 On the road, Ford have ensured that their Fusion either leads or matches competitors in terms of technological advancement. Loaded with high-tech features – a list too long to mention, and that equals cars priced up to and over the million rand mark. The Fusion’s array of technical gadgetry and luxuries is highest in the Titanium badged models, with a more modest smacking, albeit generous list in the Trend models.

The Fusion is driven by a selection of three engines: two EcoBoost petrol options – 1.5 (132kW) or 2.0 (149 or 177kW) or a 2.0 TDCi (132kW) diesel. The engines are mated to a slick shifting 6-speed automatic gearbox, carrying the Fusion in a comfortable and highly effortless manor with the 2.0 (177kW) option being rather spritely. 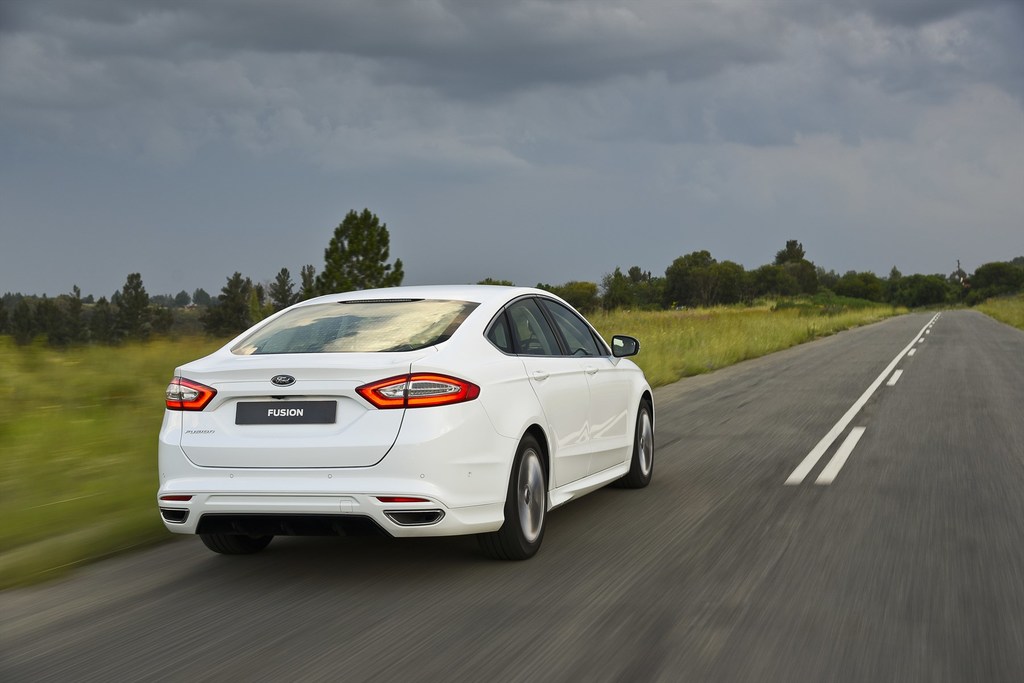 The 1.5 is my preferred choice. Its purchase price and driving economy being the major attraction. Simply put, you won’t need more power as it offers an impressive levels. In fact, it matches that of a 320i BMW. The Fusion is priced from R350k and tops out at R470k. It is position as a medium sized executive sedan, taking on the likes of VW’s Passat, Honda’s Accord, Peugeot’s 508 and possibly the entry-level Audi A4 or BMW 3-Series. 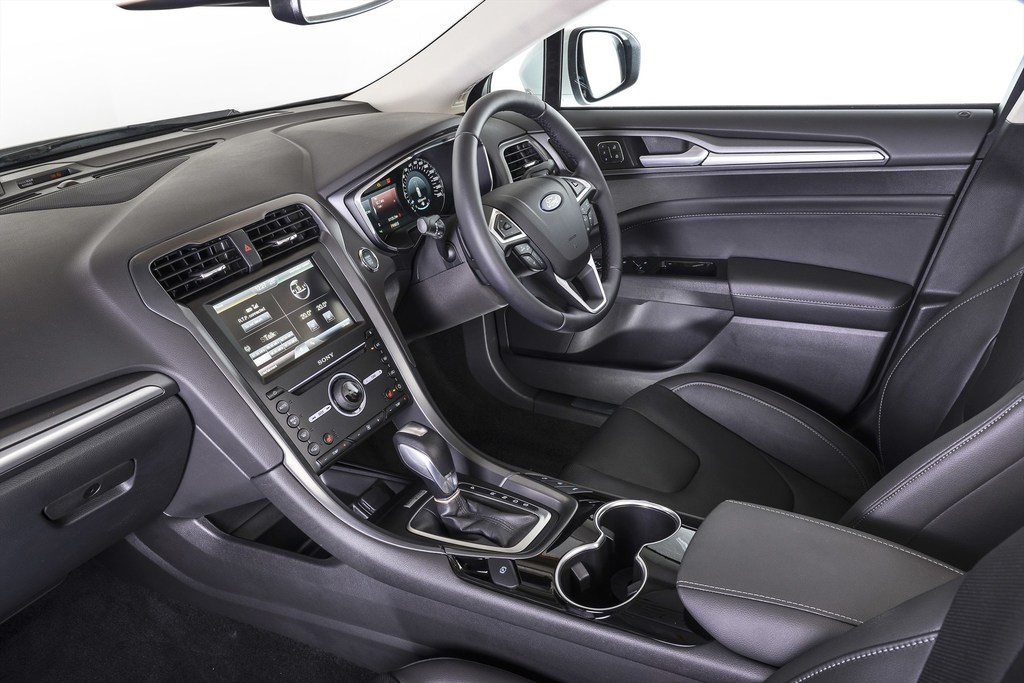 Honda, the car maker known and loved for their reliability launch their all new Jazz. A car loved by the blue rinse brigade, but for good reason. You know what they say about ‘older’ people, right? They’re wise. Their life experience affords them the ability to know ‘how things work in life’ and it’s true. 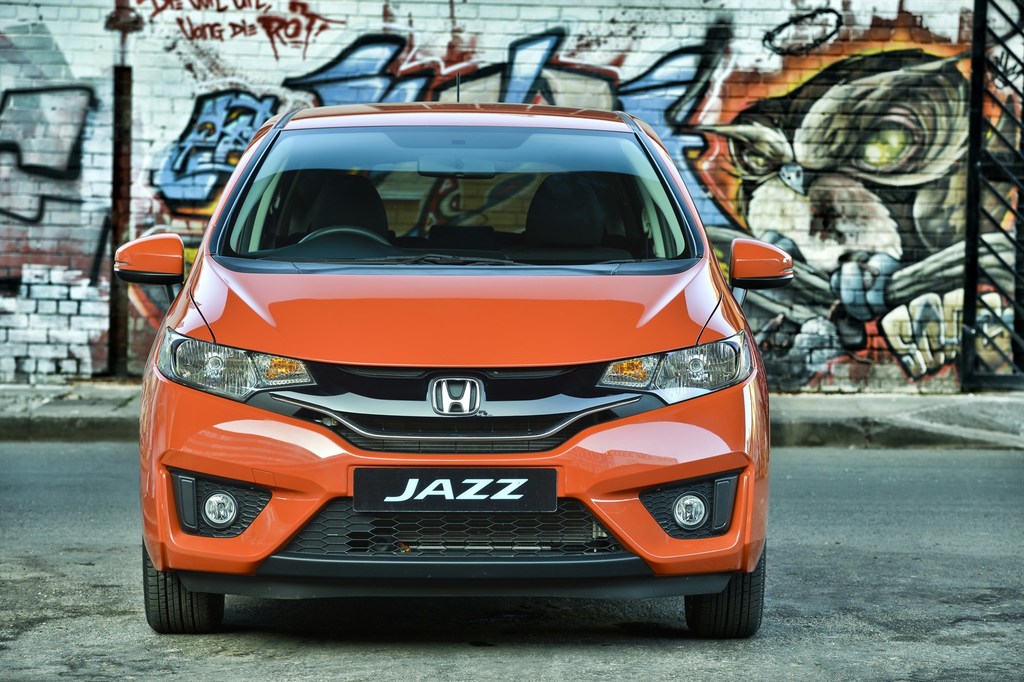 The Jazz is a fantastic city hatch but if truth be told it needed to shrug off the scent of mothballs and douse itself in some eau de cool. The latest Jazz lives up to its name. It looks ready to tap-dance its way around town, showing-off its new geometric threads. With a dash of Volvo in the rear and a sprinkle of BMW's futuristic i3 design cues lingering in the Jazz's details, it's an artful representation of the way forward for the a new Jazz, albeit without being a copy – rather a unique modernist interpretation of the way forward for compact city hatches.

Sharing its bigger brother, the Ballad’s platform, the Jazz is bigger, more economical and better than the outgoing model in every way. The all new Jazz is ready to increase its market share. Its brave new design is specifically designed to attract a broader audience, who will be welcomed to the Jazz family. This family know that their little hatch is designed to last and last, with little to no reliability issues.

The Jazz is available in two petrol engines: a 1.2 or 1.5 four cylinder, mated to either a city nipping 5-speed manual or a faux seven speed CVT automatic. Having only driven the manual, I reflect on its smooth shifting action and little clutch. It has been designed with shorter gear ratios for easy acceleration around town, requiring less downshifts for overtaking. The downside, though minor, means the Jazz revs a little higher at highway speeds, leaving the desire to change into a sixth gear, which there isn’t. The cabin hasn’t lost is famous Magic Rear Seat, which concertina’s, creating a cavernous boot. In fact it’s more than just practical, it’s a stylish cockpit imbued with an ample array of trend technology. Higher spec’d models feature a 7” touchscreen infotainment system that mimics the qualities of a smart tablet. 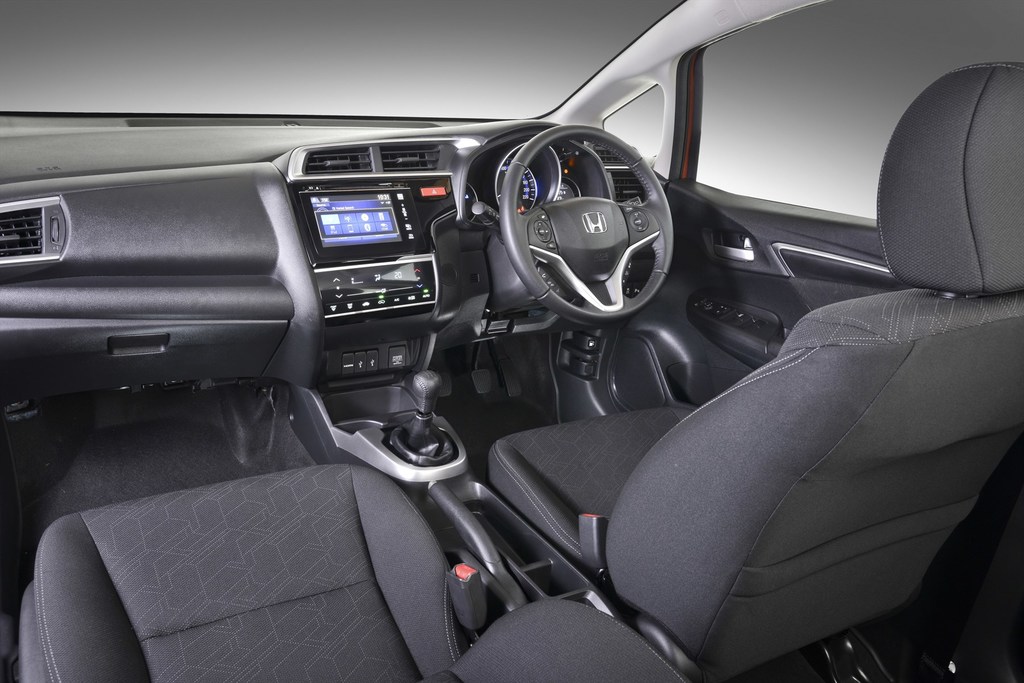 Having already established a funky rapport with the entry-level, small hatch buyer, Suzuki continues to expand its offering in this segment. In 2014, they included a sedan version into the already popular Swift stable, then introduced the Suzuki Splash and now they opened up the 2015 year by replacing the well-known basic Alto with a new, higher spec’d model called the Celerio. 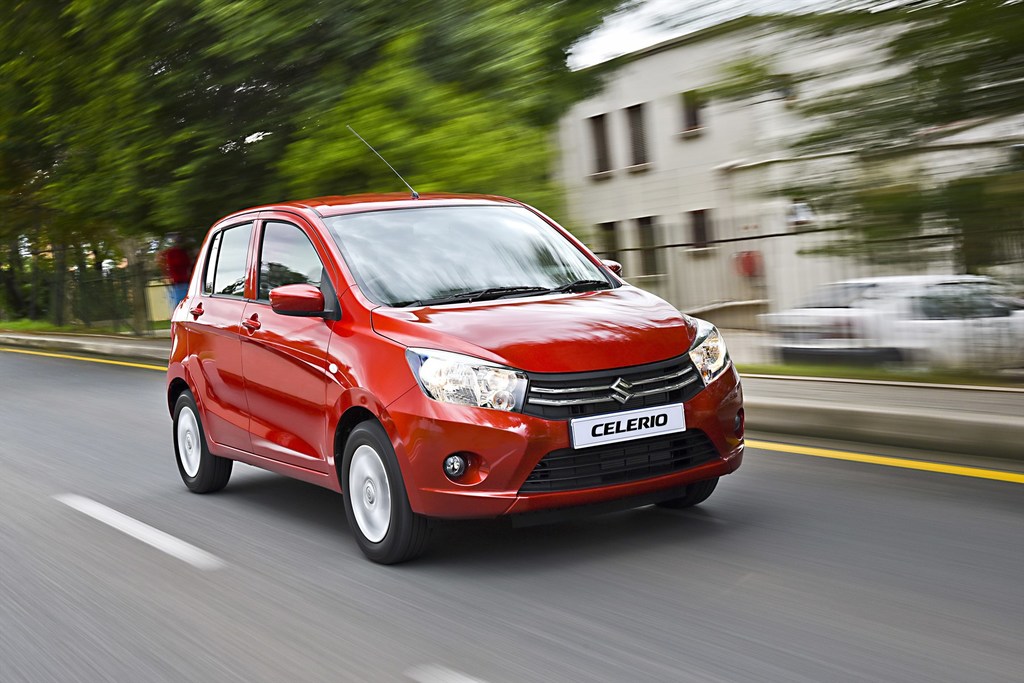 We flew to Durban to test out this newcomer on the coastal roads and see what Suzuki had in store for us this time. Getting straight down to brass tax, the Celerio starts off at R109 900 for the entry GA annual transmission; the range includes a total of six models up to the GL AMT at R138 900. All models are a 1.0i engine which offers 50kW at 6000rpm. Although that sounds low, and it is, the Celerio cruises along perfectly on the urban roads.

From a drive experience, we tested the Celerio on city, freeway and even rural roads; and the vehicle held its own. It’s a far more comfortable drive than you would expect from such a small car, but then again once you’re inside it magically it feels substantially bigger than it looks from the exterior. Which is why Suzuki have dubbed it an extra-large small car (XLsmallcar). With heightened roof and ample leg room, it isn’t space you will be looking for. When it comes to features, although the base GA models lack a few creature comforts that the GL models offer as standard (such as electric windows, central locking and audio with CD, MP3 and Bluetooth), it still gets the job done and positions itself as the perfect student or young adult car.

An interesting feature is the Automated Manual Gearbox (AMT), which is fitted to the top two GL models. Instead of being full automatic, the driver can “switch” their transmission into automatic mode, which intuitively changes the manual gears on your behalf. What this offers you is the comfort of an automatic with the fuel efficiency of a manual. Speaking of fuel efficiency, Suzuki boast an impressive 4,7l per 100km in the Celerio, making it a segment leader.

It’s a solid buy, with great options. Personally I would go with the 1.0i GL MT Alloy, but if you want to spoil yourself and add on an extra ten grand, then the AMT models are not a bad idea either. The GA’s do not come standard with a service plan, but the GL range comes standard with 2 yr/30 000km service plan. 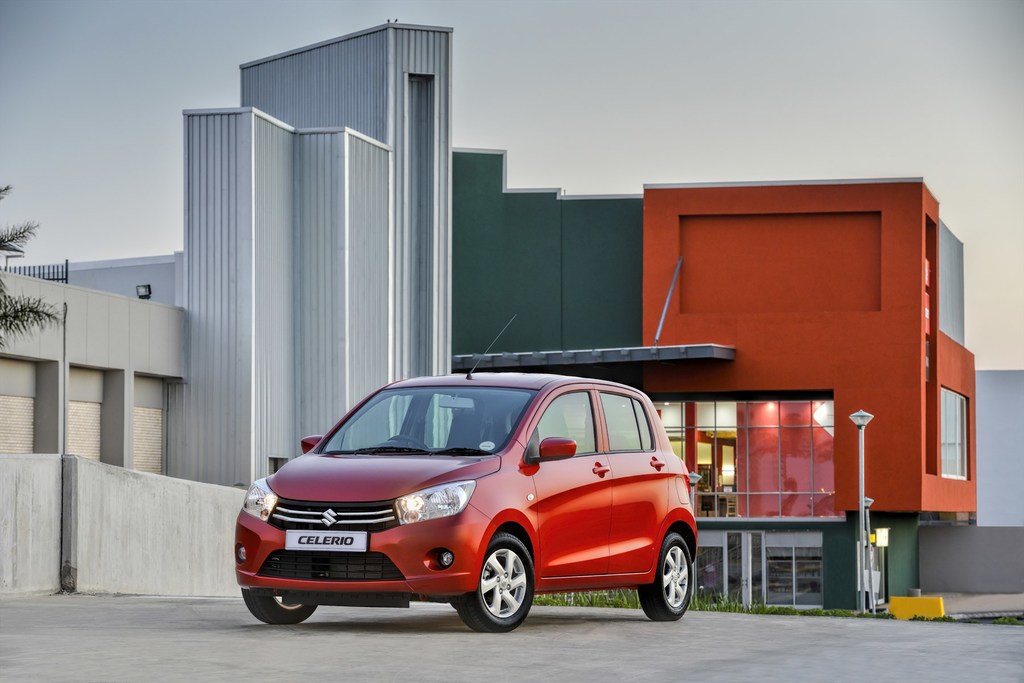 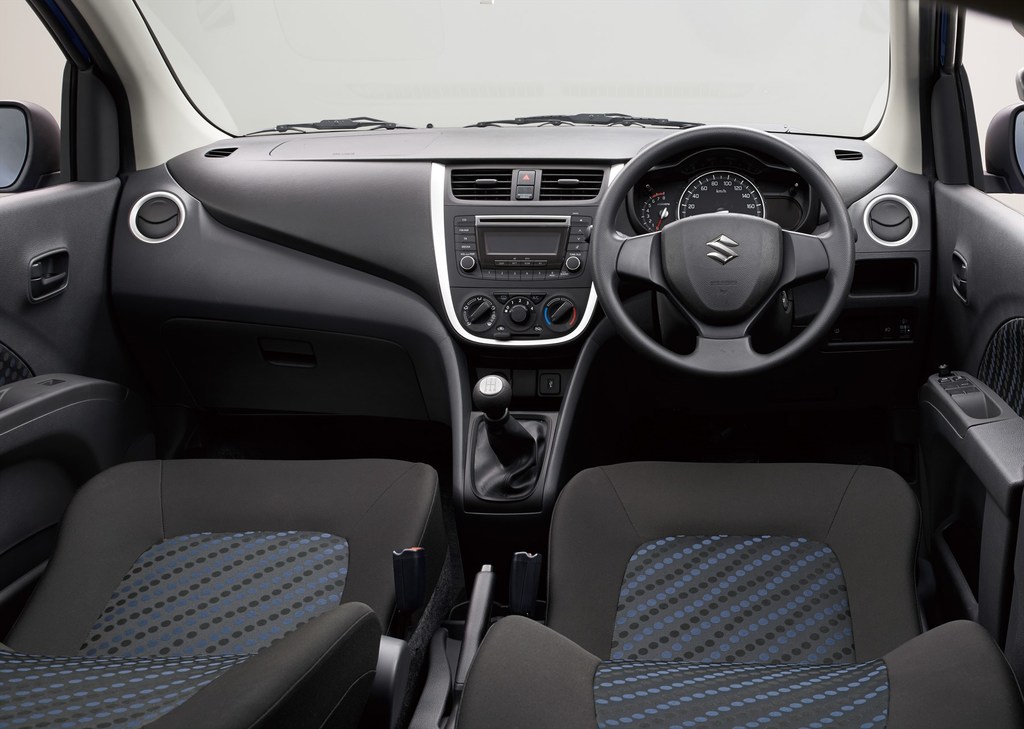