When character is key and less is more… 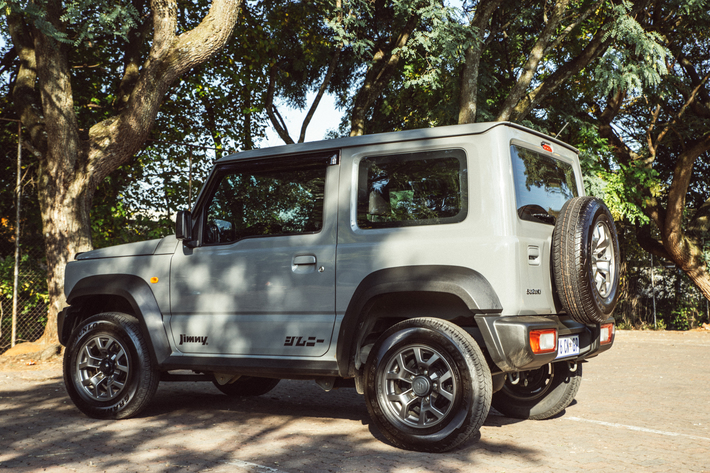 Born during the 1970s, no doubt brain fart from some genius at Suzuki, probably as a result of a stressful decade of wars that lead to peace and love marches – the Jimny was born.

Last year saw the reveal of the fourth generation Suzuki Jimny. Think about it – originally launched in the ‘70s; 2018 saw the reveal of the fourth incarnation of this adorable and highly capable little 4x4. That’s an average of a 12-year lifespan per model. Obviously, sales must have been good enough through the period or Suzuki would speed up this process, especially for the outgoing model that reigned for two decades.

Anyway, I digress. Back to the new Jimny. As cute as ever, it is still built on a ladder platform, which allows for flexibility and confident off-roading. A smidgen shorter than the outgoing model, yet wider, the Jimny stands at 170cm tall remaining a petite 4x4.

The new design carries style cues from its three forefathers, creating an iconic design, albeit its boxy aesthetic does bear a striking resemblance to the Mercedes-Benz G-Wagon and the Land Rover Defender. Only, the Jimny is a mini version - and cuter.

The new Jimny has been modernised with a fresh 1.5-litre engine (75 kW/130 NM) that is mated to either a 4-speed automatic (with an overdrive mode) or 5-speed manual gearbox. The new Jimny models are fitted with a 4x4 system called AllGrip Pro®, which allows for comfortable adjustment between 4x2 (rear-wheel drive), 4x4 high and 4x4 low range with a secondary gear lever. This system is supported by both the vehicle stability control (ESP) and a new Brake-enabled Limited Slip Differential system. Additionally, the Jimny integrates Hill Hold Function and Hill Descent Control. Note – this is a real 4x4. 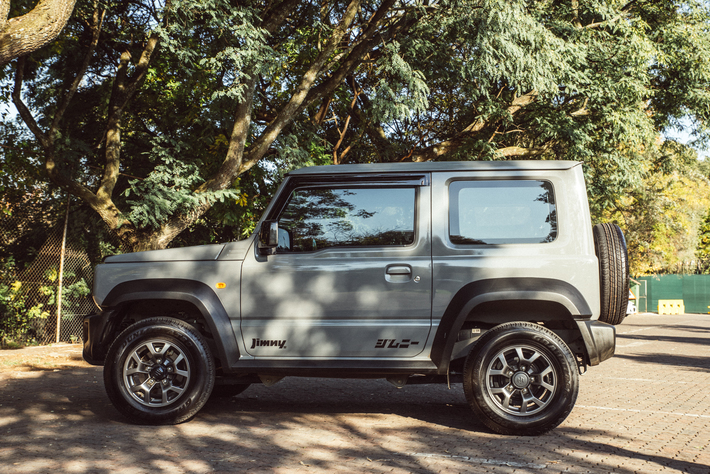 The new Jimny now has a 210mm ground clearance, 20mm more than before. The new design and extra ground clearance have improved approach angle from 35 degrees to 37 degrees; the break over angle is up to 28 degrees from 27 degrees and the departure angle has improved significantly from 46 degrees to 49 degrees. That’s geometry for very capable. A lot of degrees amount to a highly capable little rhino.

Despite its little exterior, its interior feels relatively spacious; seating is for four adults. With that said, note – the boot is ridiculously tiny. Don’t fret – just lower the rear seats and voila! The boot is a nice size but then you’re left with seats for two. Suzuki’s focus is on comfort and practicality. So, there are a few additional storage bins that are perfect for water bottles and phones etc. The Jimny is also the first local Suzuki to feature a touchscreen 7” SLDA – smartphone linkage display – to the new GLX-specification. This large touch screen is fitted with Apple CarPlay, Android Auto and Mirror Link to accommodate most smartphones’ in-car features and

I love the large removable luggage box that is part of the options list, and just behind the rear door sill, there is a hidden toolbox that can also be removed.

So, should you buy this niche little cutie? Point 1: the ride quality has been dramatically improved, which is essential - considering that you’ll spend most of your time on the road. Point 2: the Jimny is an incredible off-roader. Point 3: it’s so cute, whatever gender you are. Point 4: its modernised to the point of having an infotainment system. So yes! Buy it. It’s not perfect – it’s a little slow and simple by comparison to other 4x4 options but they are a lot more expensive.

Pretty unique, but you could also consider the Renault 4WD and the Fiat Panda 4x4.