Have seen the advertising campaign featuring the metallic burnt orange Toyota 86, released earlier in the year? For those who noticed, you will remember the campaign slogan “go play”. You may be thinking Toyota and the word “play” sounds like a contradiction? Well this isn’t entirely the case as Toyota has a long history of making sports cars and the 86 inherits the spirit of former Toyota sports cars. A lineage that spans more than 50 years, with the new 86 encapsulating the best elements of three key models from that rich heritage: the Toyota Sports 800, the Toyota 2000GT and the AE86. Toyota’s team of engineers partnered up with Subaru’s engineers when designing and developing the 86. The combined genius of two sets of Japanese engineering geeks could only result in something very clever. Can you image their combined IQ? This sandwich of technical geniuses has breed what can only be described as a real sports car.

Visually, the 86’s bold, simple, yet iconic styling incorporates two key pillars of a new Toyota design language: Under Priority frontal design, which places the emphasis on an enlarged lower grille. Focusing attention on the lower part of the car for a distinctive, more assertive appearance, and a Keen Look approach for clear, intelligent and expressive styling. 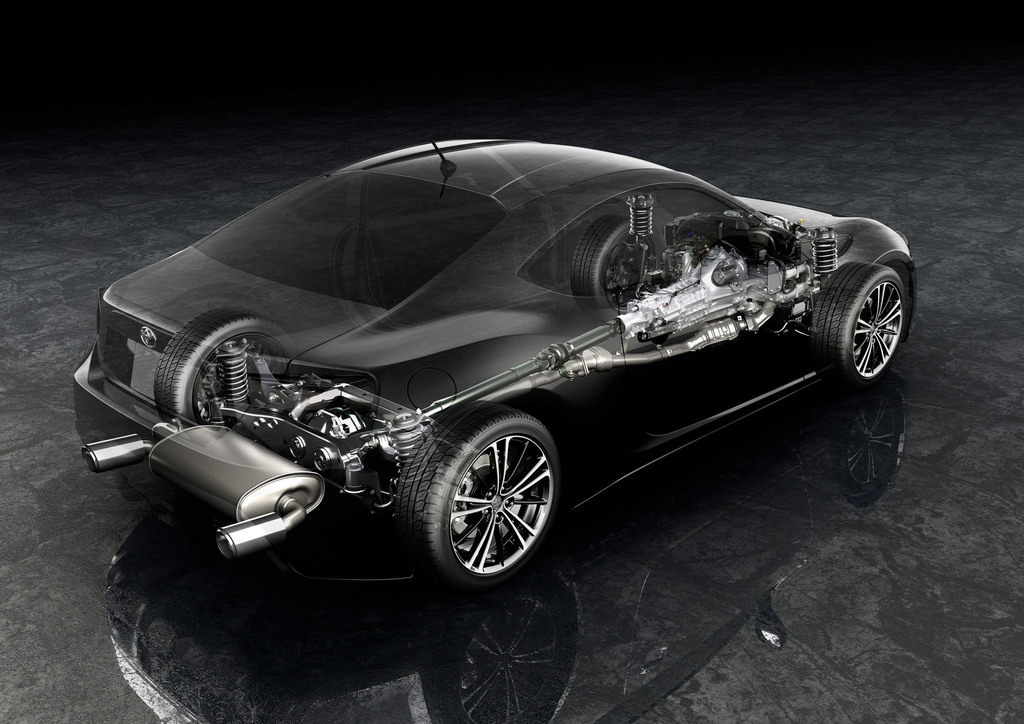 To enlarge on the latter. Keen means intelligent and clear in this context, clear as in vibrant clarity, meaning bright and clean. It’s manifested in the bold ‘scorpion’ styling to the lower grille, the piercing glare of High Intensity Discharge or HID headlamps and extensive use of LED lights (High model only), giving the 86 an even more aggressive, sporting appearance. 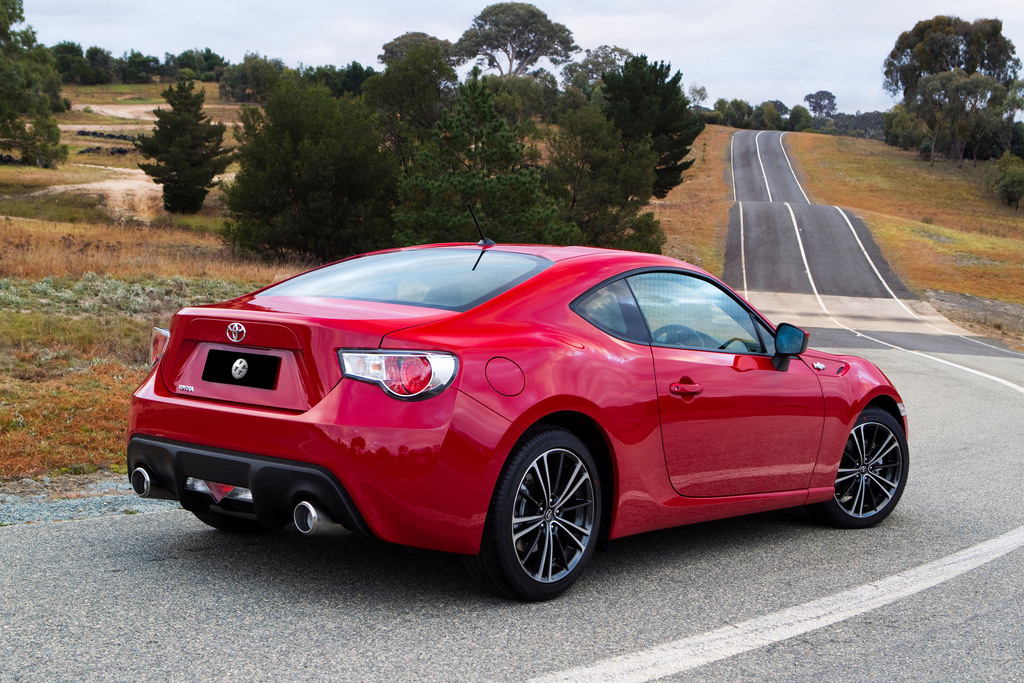 Based on an entirely new platform, the 86 has a low, highly aerodynamic body shell (drag coefficient of a slippery Cd0.27) stretched tight over the engineering hard points, making it the world’s most compact four seat sports car design. Though it has four seats, it does not actually mean you could seat four adults though. The back bench is best suited for shopping and/or a small kid. The 86 also has the lowest driver hip-point of any Toyota production vehicle- just 400mm. The 86’s driving position is 7mm lower than that of a well-known German supercar.

On the road the 86 is brilliant. It has a perfectly balanced light character (1,239kg) that combines just the right amount of power from its 2.0-litre front mounted boxer engine, which revs freely to 7,400rpm. Power is chopped up via an outstanding flick of the wrist 6-speed gearbox, which makes changes through its selector a true highlight. Combine this with a rear wheel drive setup, precise steering and normal tyres, this spells a recipe for sheer fun. The best part of driving the 86 is that it delivers exhilarating driving at legal speed limits. The problem with some other sports cars is that in order to ‘feel’ their fantastic engineering, you are travelling at dangerous speeds. This isn’t the case with the 86. You can get the rear to slide out in a playful manor, leaving you with a smile and fancying yourself as a racer. 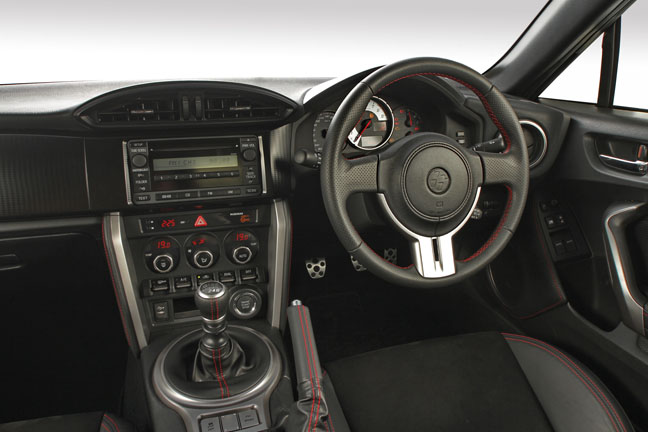 The interior too is playful, featuring carbon effect trim, a sporting, all-black roof lining, red upholstery stitching, aviation-style switch and lightweight aluminium pedals. The seating position is outstanding, with formfitting seats. The rear is a kid’s only affair. Don’t think you’ll be running a lift club with the 86. Some of the materials feel cheap, but when you consider the good levels of standard equipment, you can forgive it. On the passive safety front, both model grades boast a total of seven airbags: driver, passenger, side, curtain and driver knee bag.

While outright acceleration is clearly not the 86’s raison d'être, the figures still reveal a car that is capable of sprinting to 100 km/h in just 7.6 seconds (8.2 seconds for the auto). Top speed is pegged at an academic 226km/h for the manual and 210km/h for the auto. 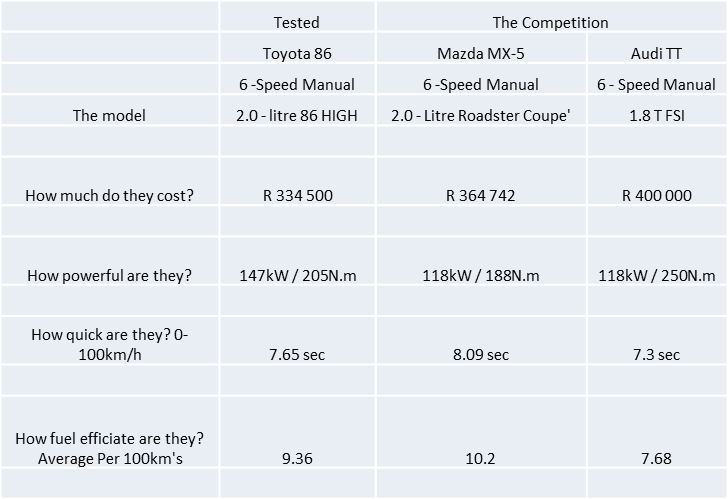 All 86 models come with a four-year/60,000km service plan included in the purchase price (service intervals are every 15,000km), along with Toyota's comprehensive three-year/100,000km warranty. The new 86 is supported by the ToyotaCare Roadside Assistance Programme and entitles customers to 24 hour roadside assistance.

In response to customer feedback, Toyota has introduced a number of running changes to enhance the 86’s appeal even more. These include a new touchscreen display audio system with Bluetooth functionality, a moulded boot mat as well as daytime running lights and a subtle body-coloured boot lid spoiler- the latter two items are exclusive to the two High models.

The 86 is fantastic with little real competition, especially if you consider its price. You could consider the Mazda MX-5 or an Audi TT 1.8T. The MX-5 is iconic and a great little ragtop but does not match the 86 handling prowess. The TT is beautiful and well-made vehicle, with a high quality interior. Its front wheeled drive chassis will keep planted on the road but you won’t give you that ‘real’ sports car fun feeling like you do in the 86.