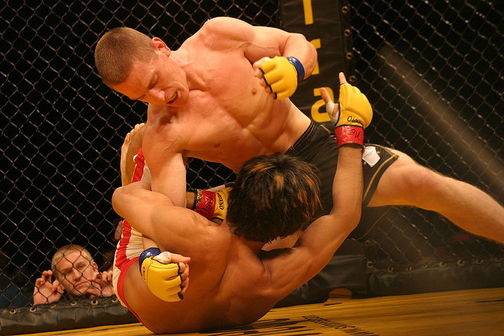 Mixed Martial Arts is characterized by a wide variety of standing and ground-based striking and grappling techniques. As a result, competitors come with a wide variety of fighting and wrestling backgrounds. During each five-minute round, fighters need to maintain an unparalleled level of physical and mental alertness to avoid falling victim to a technically perfect fight-ending blow from an opponent. The unique dimension of the sport requires incredible displays of full-body strength, speed and quickness, conditioning, and overall durability.

Wrestling is similar. Quite simply, you can’t loaf your way through a wrestling match or MMA fight. Whereas team sports leave room for lacklustre individual performances, there’s no room for laziness or fatigue in wrestling/fighting. It’s a one-on-one fight. From the second two opponents engage, it’s a constant battle of all-out physical and mental effort, as they delicately balance attempts to overpower and out-position each other.

Football is played by the fastest, largest and strongest athletes in the world. While most plays only last around four seconds, almost every player on the field is competing in high-intensity bouts against the world’s premier athletes. In other words, football creates a unique physical demand, as it requires both an exceptional amount of athleticism and durability to withstand the hard hits and rigors of the game.

LIke some of the sports previously mentioned, rugby involves a combination of speed, agility, power, and conditioning. But unique to rugby is the constant physical tension that develops during prolonged individual and group battles. The sheer size of most rugby players augments the physical demand of the game.

Because of the expenses involved with playing, ice hockey is a largely under-recognized sport in most areas of the world. But those who have stepped foot on the ice can attest to the incredible demands of the sport. Hockey involves 45-second shifts of high-intensity effort, quick starts, stops, direction changes, fighting for loose pucks, and hard hits. Players are accustomed to fighting through the painful burning in their legs as fatigue accumulates. The interval nature and physicality of the game makes it uniquely demanding. Not to mention, the whole game is played while standing on a steel blade about 1/8” thick.

Lacrosse doesn’t yet share the international popularity of soccer, but it is similar in nature. In addition to the displays of speed, agility, coordination, and conditioning that lacrosse necessitates, lacrosse is also one of the most physical sports in existence. Players need to fend off the painful whacks of opponents’ sticks, fight for loose balls on the ground, and constantly have their head on a swivel to avoid getting  knocked out by an opponent.

The world’s most popular sport enters the list at No. 6. Soccer Players are known for their speed. More specifically, players gain prowess for their ability to quickly reach top speeds and just as quickly stop on a dime to change directions. The combination of all-out sprinting efforts, physical battles to separate players from the ball or gain position, and constant motion to follow the play across fields as large as 21,000 square feet make soccer one of the most physically demanding sports out there.

Basketball is the first of the traditional team sports to make the list. Like tennis, basketball involves a lot of high-intensity quick bursts of movement, including incredible displays of speed, agility and vertical jumping power. While highly interval-based in nature, basketball also includes a component of constant motion, as the game transitions from one side of the court to the other, and a dimension of physicality as players battle for position.

The rowing stroke requires a unique combination of refined technique and raw power. Maximizing rowing power necessitates a strong leg drive and incredible core and upper back strength. Rowers need to combine this strength and power with equally impressive levels of endurance to continue a fast pace throughout the duration of the race. As fatigue levels accumulate, rowing challenges both the physical and mental toughness of athletes.

Tennis Matches involve short-duration bursts of all-out energy in the form of quick sprints, transitional movements and hitting the ball. All of these movements require a great deal of strength, speed, power, and control. The interval nature of tennis requires the body to operate at higher intensities than more continuous sports. Add in the fact that tennis is frequently played under the heat of a blazing sun, and tennis creates a unique, incredibly taxing experience.

Swimming can be incredibly exhausting, as the continuous nature of the sport doesn’t leave much time for recovery. Since the lower and upper body are constantly active in producing motion, and the core functions to stabilize the trunk and transfer force throughout the process, there’s not a second of rest. But swimming loses points in our rating because it is not ground-based and, therefore, is less stressful to the musculoskeletal system than the other sports on this list.