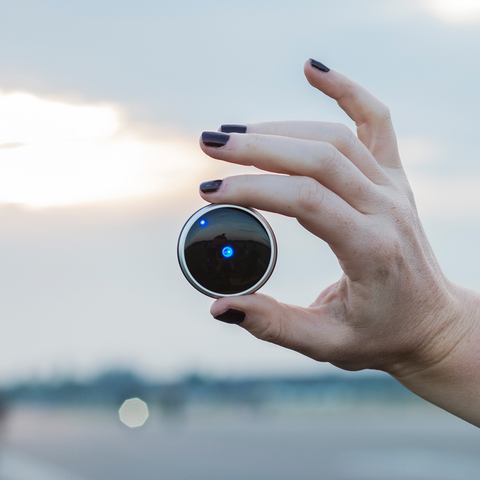 Haize by Onomo
Onomo's Haize compass uses flashing and colour-changing lights to direct cyclists to their destination, linking to a GPS smartphone app.

A ring of LEDs point the user in the right direction while a central dot flashes faster to indicate the distance from the destination before changing colour upon arrival. Find out more about Haize » 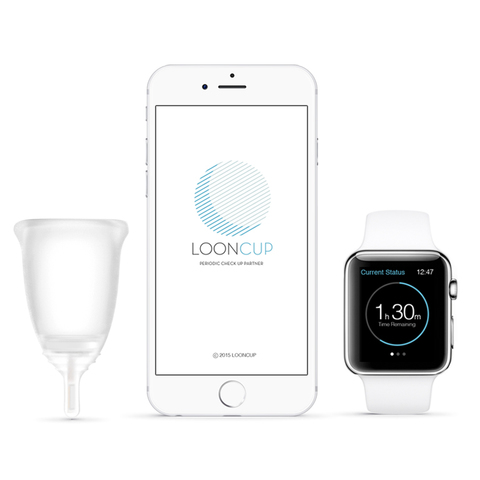 Looncup by Loon Lab
Marketed as the "world's first smart menstruation cup", the Looncup links with a phone app to provide women with information about their periods.

The silicone cup collects menstrual flow as an alternative to disposable tampons or sanitary towels, similar to other reusable devices such as Mooncup. Find out more about Looncup »

The black liquid – made up of suspended magnetic particles – is moved by the magnets in the shapes of the numbers, so the clock needs no mechanical parts. Find out more about the Ferrolic clock » Radio Activity by Roper
The Radio Activity device by Royal College of Art graduate Gemma Roper allows the user to stream music according to the pace and rhythm they want to listen to.

Sliding a circular aluminium dial up and down a vertical pole adjusts the desired tempo. The product then automatically selects tracks from the user's library on online music provider Spotify that match the tempo it is set to, and plays them when connected to speakers. Find out more about Radio Activity » Ted Wiles created the product as part of his Involuntary Pleasures collection, in which all the items require users to interact with them in ways that promote happiness and wellbeing. Find out more about the Hugging Toaster » Antenna by Dmitry Morozov
Dmitry Morozov's prototype Antenna truncheon sends a text message with the words  "Mom, I hit a man" to the user's mother every time it is used, and was conceived as an attempt to reduce police brutality.

Morozov's concept works on the assumption that even the most aggressive people care about what their mothers think of their behaviour. Find out more about the Antenna baton » 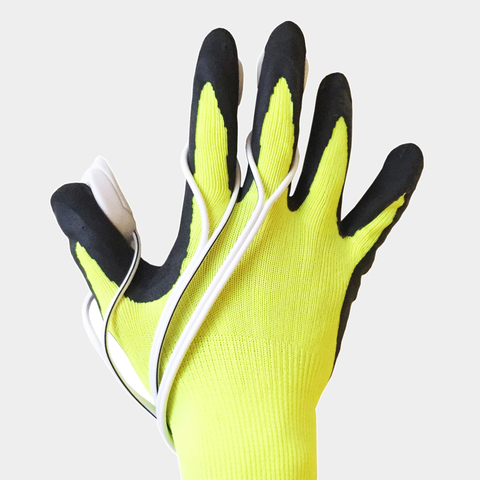 Happaratus by Morten Gronning Nielsen
RCA graduate Morten Grønning Nielsen created the Happaratus "power glove" to extend the capabilities of the hand as a sculpting tool.

Oscillating tips of the ends of the fingers can be used to sculpt hard materials like stone and wood by hand, and can be made in various shapes and different materials depending on the surface they are working on. Find out more about Happaratus »

Popcorn Monsoon by Jolene Carliers
This machine by Dutch designer Jolene Carlier spurts popcorn from the end of a glass tube into a bright yellow bowl when the snack is ready to eat.

Popcorn Monsoon comprises a pair of conical-shaped yellow bowls set into an oval wooden base – one heats to pop the corn while the other collects it. A curving glass tube fixed to the larger of the two receptacles delivers the popped corn into the smaller bowl. Find out more about Popcorn Monsoon » 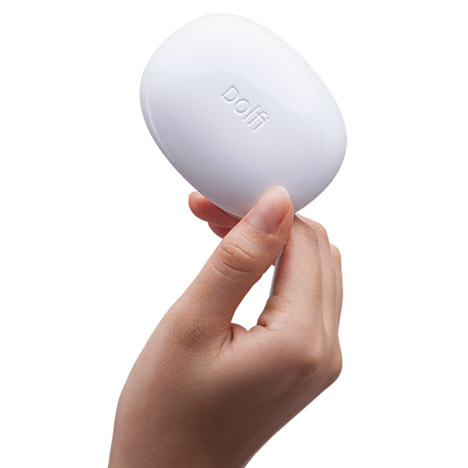 The machine aims to remove the need for hand-washing clothes made from fabrics like silk, cashmere and lace that are easily damaged, as well as offer travellers a portable cleaning option. Find our more about Dolfi »

The fictional Wankband would create power when moved in a repetitive up-and-down motion. A description on Pornhub's website called it: "The first wearable tech that allows you to love the planet by loving yourself." Find out more about the Wankband »