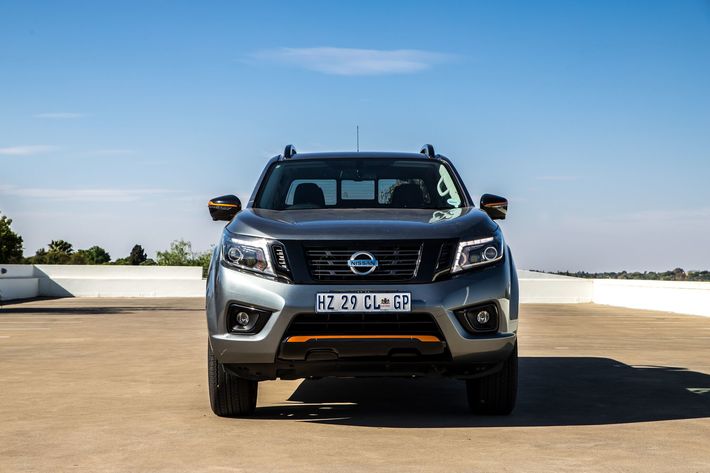 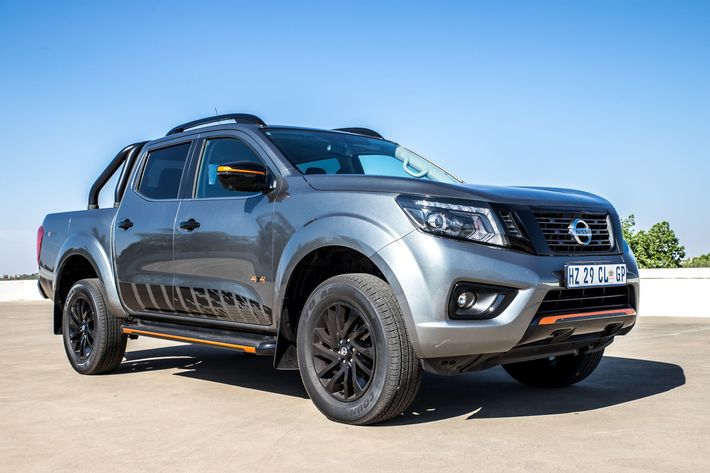 You know what I like about a pick-up? They make you feel like you can go anywhere. This is me dreaming. In reality, it’s a ridiculous notion, as I’m city-based, yet my inner wild child reigns supreme while driving one. I also like the height that this type of vehicles offers, making you feel as though you have a greater command of the road.

Perhaps I’m not the only one who feels that way? Sales of bakkies/pick-ups remain buoyant. Nissan’s 2016 International Pick-up of the Year has continued to evolve since its launch. As of May, they have launched a Stealth version. You know a Stealth is that black triangular military aircraft: fast, agile and deadly. I think Nissan’s creative team were reaching when conceptualising the idea.

Anyway, it’s a nice objective that has been aesthetically executed. The standard silver and chrome detailing on the exterior give way to sleek, black trims, while newly added orange accents - on the grille and front bumper, side mirrors and side steps - give the new Navara a character that is both edgy. Roll-bar, side steps and black alloy wheels complete the picture. 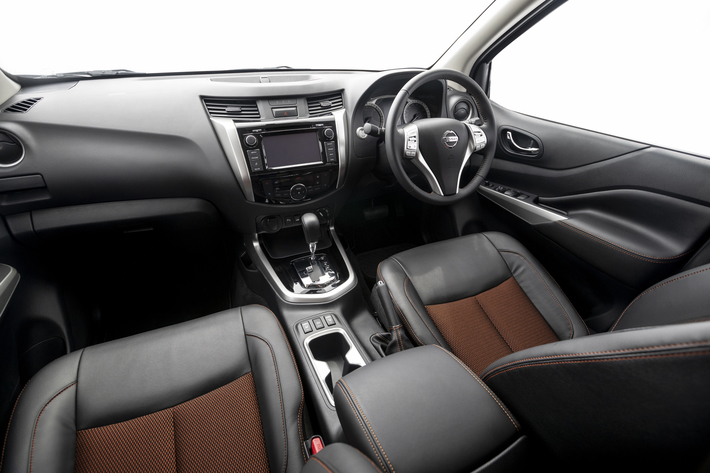 This two-tone colouration is carried through into the interior, with seats featuring black leather side bolsters, orange material inserts and stitching which both contrast and complement one another to give the cabin a strong, modern feel.

This rugged off-roader combines distinctive, rugged aesthetics with superior performance. Nissan offers the Navara in either 2X4 versions to their 4X4.

In addition to the aesthetic changes, there are technological additions: Intelligent Key System, the Intelligent 4x4 System – which assists drivers in smooth cornering by adjusting power output to the front and rear wheels – and Hill Start Assist. 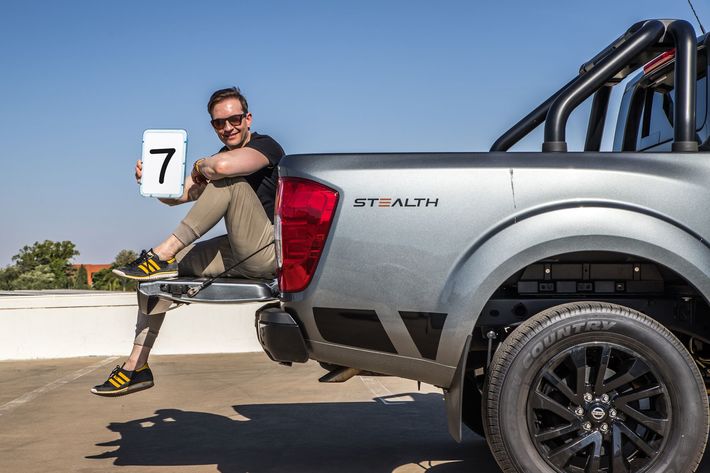 The Navara also comes with Intelligent Around View Monitor, which uses four cameras positioned at different points around the pickup to give the driver a 360-degree, aerial view of the vehicle and its surrounds.

Lighter than its predecessor, 176kg in fact, it features a frugal 2.3-l twin-turbocharged diesel engine (140kW and 450Nm) and has fancy rear suspension geometry - more in line with what you'd find in a luxury SUV. Able to tow a braked trailer of up to 3 500kg.

It is also more luxurious - with niceties such as leather upholstery, an electrically adjustable driver’s seat as well as heated seats. The list continues. Despite its rugged appearance, the Navara’s softened by its comforting and cosseting interior. 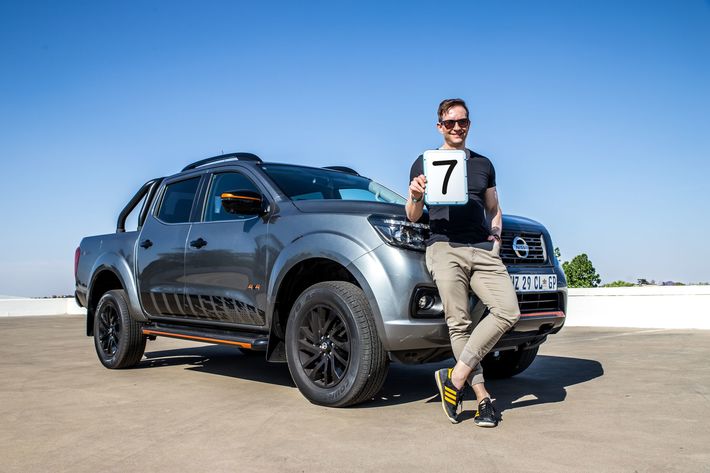 So, how do these modern engineering features translate in function by comparison to its rivals? I’ve reviewed the Ford Ranger in several derivatives and driven a Hilux for a bit.

The new fancy suspension didn’t feel too fancy - the ride is like other utility 4X4s and less like a luxury Sports Utility Vehicle. I must say that over more challenging road surfaces, I note better assimilation than other bakkies I’ve driven. Handling is pretty good, too. I’d link its new suspension set-up to this improvement.

What was impressive is the Navara’s engine: despite its modest capacity of 2.3-l, its performance is both prodigious as well as frugal. It does have its downside: it’s vocal. As a result, it’s better to drive with the windows closed to block its swoosh and clattering sounds.

I reviewed the automatic model. Its gearbox – a slick-shifting 7-speed - is a highlight of the Navara.

The interior is clad in an array of quality materials that adds to the luxuriousness of car. It’s hard to fault with my only gripe being its infotainment system. In isolation, it’s not bad. When compared to others, like the system in the Ford Ranger or Toyota Hilux, it’s not as easy to use. 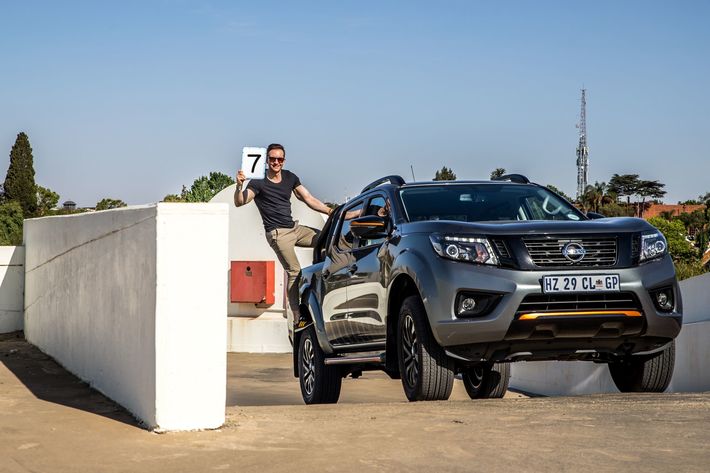 Overall, the Navara is a highly competent workhorse, able to carry loads of 1002kg. It feels solid and stable on the road. Aesthetically, it’s polished and sits comfortably in a parking lot amongst the “fancy folk”.  From a functional aspect, the load bay on double cab versions has been stretched by 67mm to 1 503mm and been made deeper (474mm from 456mm), resulting in a capacity of 1 061 litres. That is great for those who are going to use the vehicle for work purposes.

Peace of mind is provided with a class-leading warranty of 6 years/150,000km and a comprehensive 3-year/90,000km service plan.