The Lexus IS is a design revolution, not only in comparison to its predecessor, but also within its class. It is a very attractive car with aggressively penned lines that make your eye rollover its curvaceous body, I’m sure in the way Brad Pitt’s eyes would manoeuvre over his wife’s body (if she wore a sexy satin negligée). This segment (compact executive sedans) is led by the BMW 3-Series, Mercedes-Benz C-Class and Audi A4. All three brands draw the majority of their incomes and profits from this segment. That said, it is a highly competitive playing ground for all those who dare to try. Lexus IS now in its third generation, which marks a leap forward for the brand and a very real effort to position itself if not as the leader, unashamedly a potential threat to the leader. If the Japanese knew how to design they could potentially rule the world, this is an interesting thought and one worth contemplation. The Asian market has a flourishing industry with the ability to copy and manufacture almost anything to quality standards. But most of the items produced from Asia are not original designs, but rather copies from Europe. 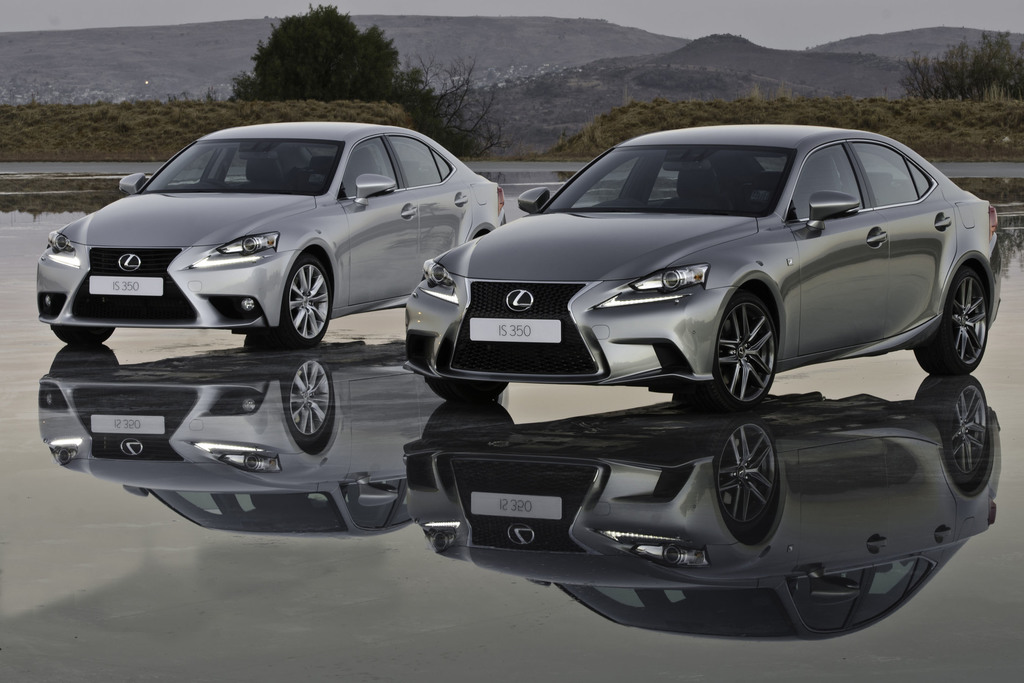 The design team at Lexus appear to have turned a blind eye to copying anything when developing their IS model. Blind to what the competitors are doing and rather focusing on being the best they can.

I was rather excited to drive the IS350 after Car Magazine rated it above the 3-Series BMW and Audi’s A4. Visually it is more striking than either of the two competitors. From an accommodative perspective, all three vehicles are on par, with the Lexus having the nicest new car smell of any car I have driven, it is sophisticatedly yummy.  The cabin not only smells great but features a library of standard features (navigation, park distance control with reverse camera, MP3, Bluetooth, electrically adjustable seats that are both heated and cooled), which are uniquely presented and easy enough to operate once you have spent some time engaging with the car. The feel of the buttons are top quality. Start the IS350 and you hear almost nothing. Lexus pride themselves on producing cars that are very quiet. The IS features a silky smooth 3.5-litre V6 engine which when revved to its limiter, becomes rather raspy. The Audi and BMW both feature 3.0-litre engines one with a supercharger and the other with a turbo. As a result of the high altitude in Gauteng, the Lexus being a naturally aspirated car without the advantage of a turbo or supercharger, makes it feel less punchy that its rivals. At the coast with the densely oxygenated air, this is will be less of an issue.

The IS has been designed for comfort and has a premium feel to its ride quality. The IS is as happy cruising on a smooth highway as it is being driven sportily around hairpin bends. There are ample levels of grip and loads of driver enjoyment through its handsome chunky steering wheel. The breaks are a highlight of the car, they instil confidence and add to the driver satisfaction. I drove the car through a rather rainy period and can say that Audi’s four wheel drive system ‘Quattro’ would top the Lexus for sheer grip, but this is most notable in wet weather. 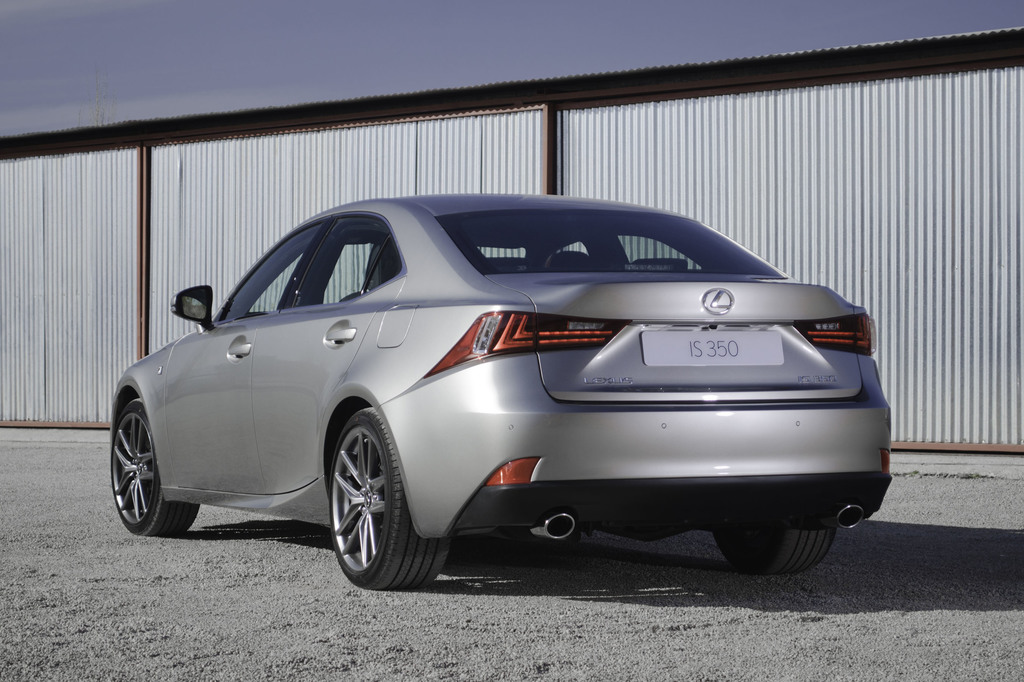 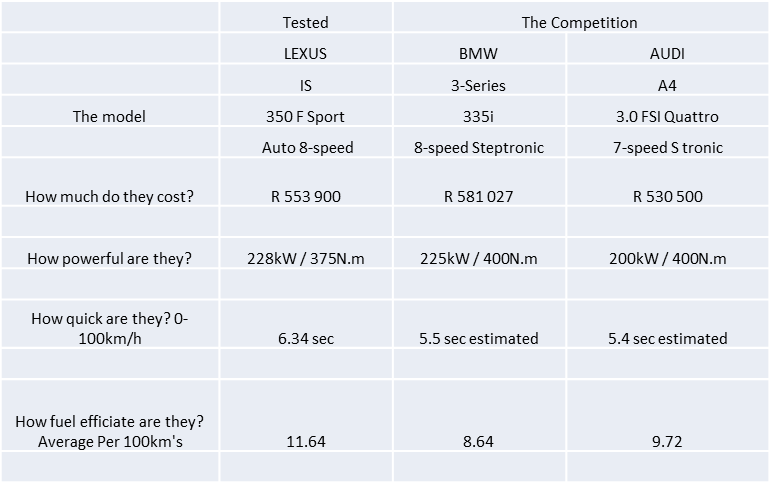 The IS comes in three spec options: The IS350, IS350 EX (luxury spec option) or the IS350 F SPORT. The F SPORT package benefits from exclusive, more sporting and aggressive exterior and interior design features as well as dynamic enhancements.

All IS models come standard with 4 year/100 000km maintenance plans.

The Lexus IS350 is undoubtedly a great car. In many ways the IS is better than both the BMW 3-Series and the Audi A4. I have chosen to ignore the Mercedes-Benz C-Class because 2014 sees an all new C-Class that will certainly give all on the playground something to think about,  but in its current guise is outclassed by the IS350.

The problem with the IS is the fact that the competitors have up to eight engine variations in their range. With the largest engines being the slowest sellers. Lexus IS needs to have at least three to four smaller engine variations to start absorbing more of the competition sales. This is important if you put the group of A4’s to the group of 3-Series to Lexus’s limited group of variants mentioned above. If one ignores this and only pairs variant with variant, the IS in EX (luxury spec option) is very hard to beat from a price (R499 900) and spec perspective, making it a very alluring alternative to its competitors.