The Super Sleek trend in the Prada 2013 resort Campaign

After a couple of seasons of being banished to Siberia, straightening irons are making a big comeback! Pack away the curling wands, hold back on the rollers and bring on the protection... Super Sleek Hair is where it's at. Whether it's a sleek ironed ponytail, sleek gelled partings or sleek fringe-glossy pin straight 90's hair is back!.

Remember with all that ironing, hair needs hydrating, so before and after ironing use the ultra hydrating Davines Oi Oil. Last tip always use an iron with a temperature control at 180 degrees.

More from the Versus runway.

Gelled and sleek in Vogue.

The Super Sleek trend in The December British Marie Claire. 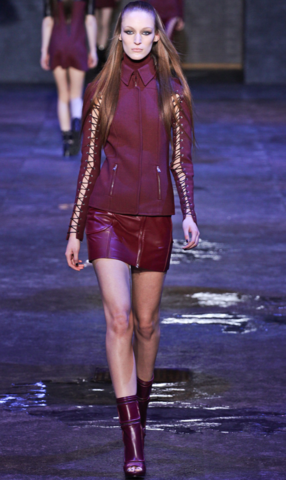 On the Versus runway.