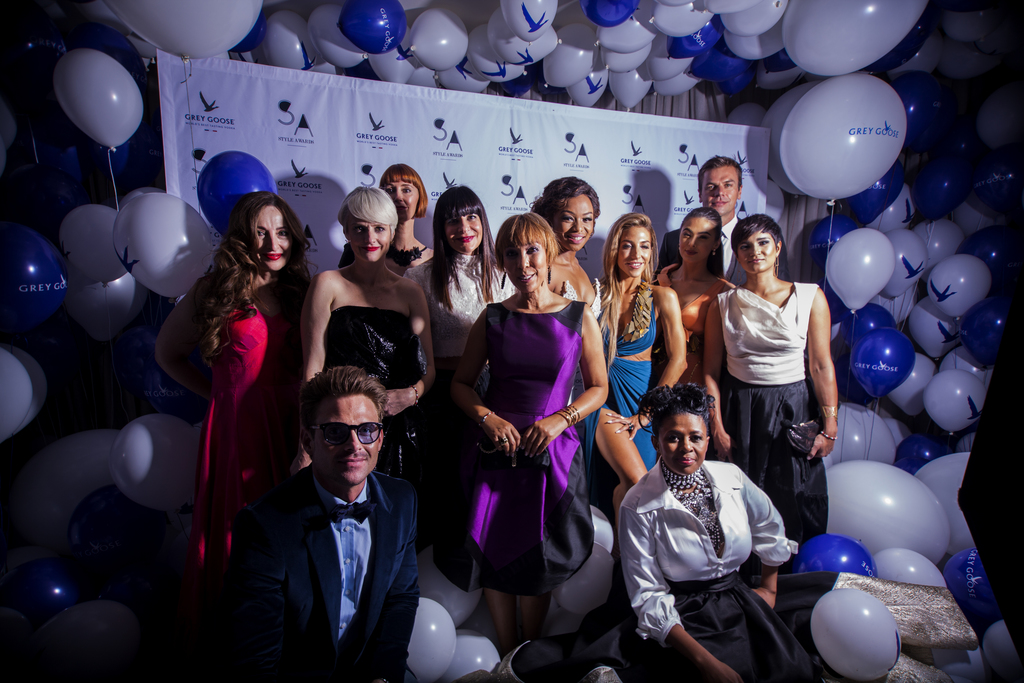 The 19th Annual SA Style Awards was a trip down memory lane with an extravagant affair held in commemoration of the past two decades (just about) most popular title-holders in various Style Award categories and brought back enchanting memories of those we love(d) many years ago.

The event has become one of the most prestigious occasions on our fashion and social calendar and is dedicated to finding and celebrating South Africa’s trendsetters, who create a benchmark for excellence in their specific career paths. 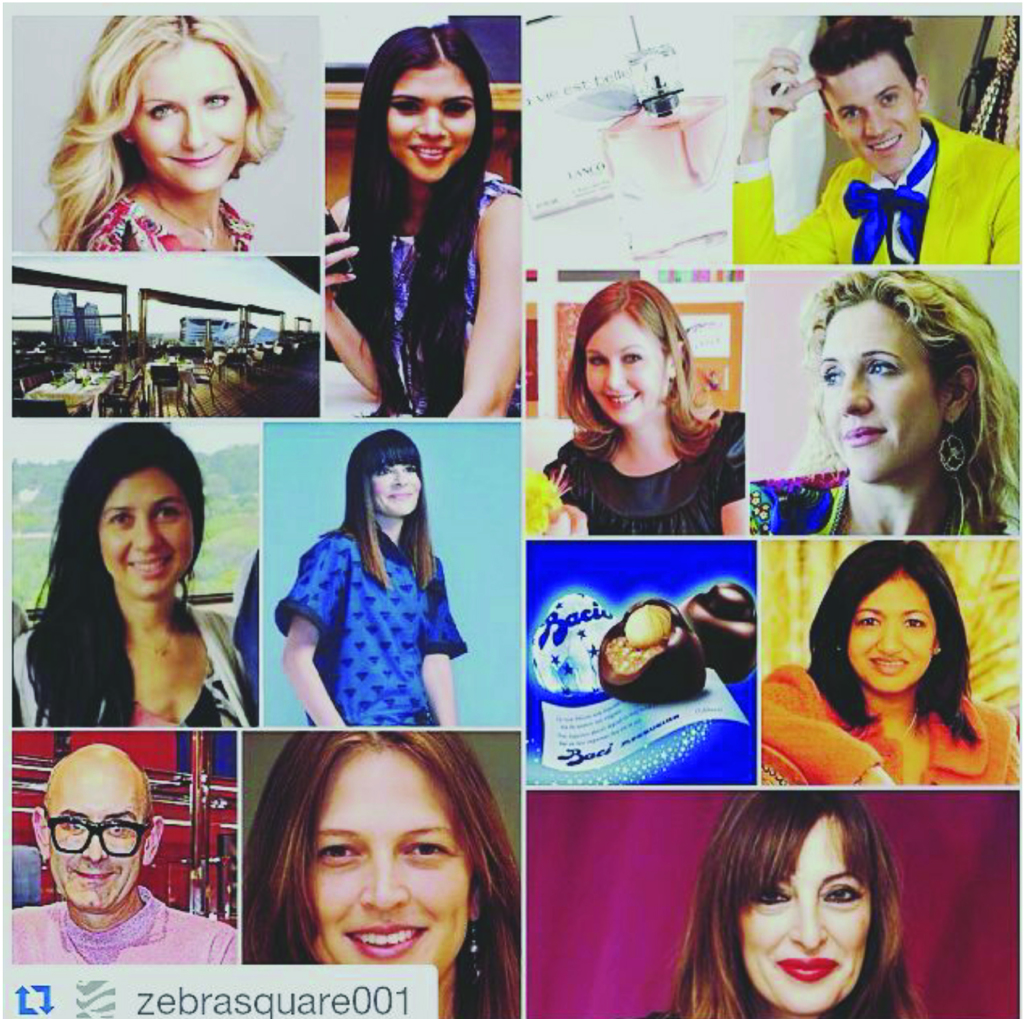 We were treated to a delicious lunch at the San Deck #tsogosun in Sandton for the SA Style Awards Judges Luncheon. What happens behind the scenes, prior to the awards ceremony is a meticulous and lengthy judging process of which I’ve had the privilege of being part of for the past couple years. We judges had our work cut out for us this year in finding three new entrants for the category: “The Next Best Thing". After much deliberation we proposed aspirants that would stand a chance to shine at the side of the golden oldies. We were spoilt with goodies from Lancome, Balmain, Baci chocolates and Ashbourne Wine from Hamilton Russell Vineyards. 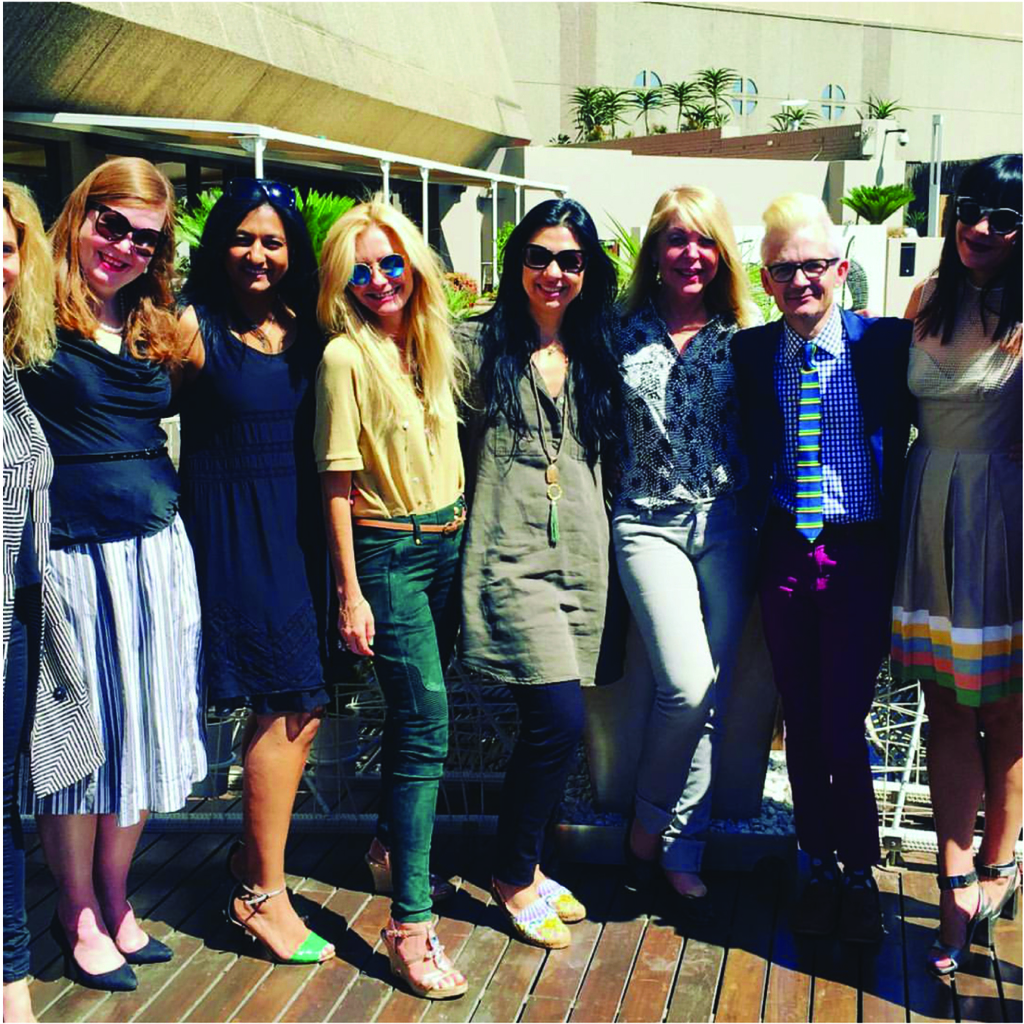 With the negotiations done and dusted the judges and media were treated to a wonderful media lunch at Life Grand Cafe in Hyde Park Corner whilst a alot of pampering was bestowed upon us by Dr Anushka Reddy from Medi-Sculpt Clinic with a remarkable oxygen facial treatment (used by many glowing Hollywood celebrities) Prefectly apt mani’s were provided by The mobile nail bar FoxBox to ensure all of us were red carpet ready for the big night. The elegant affair began with a champagne reception in Centre Court at Hyde Park Corner, attended by SA’s top celebs, media and VIP guests dressed to the nines, all in high anticipation for the announcement of this year’s winners. 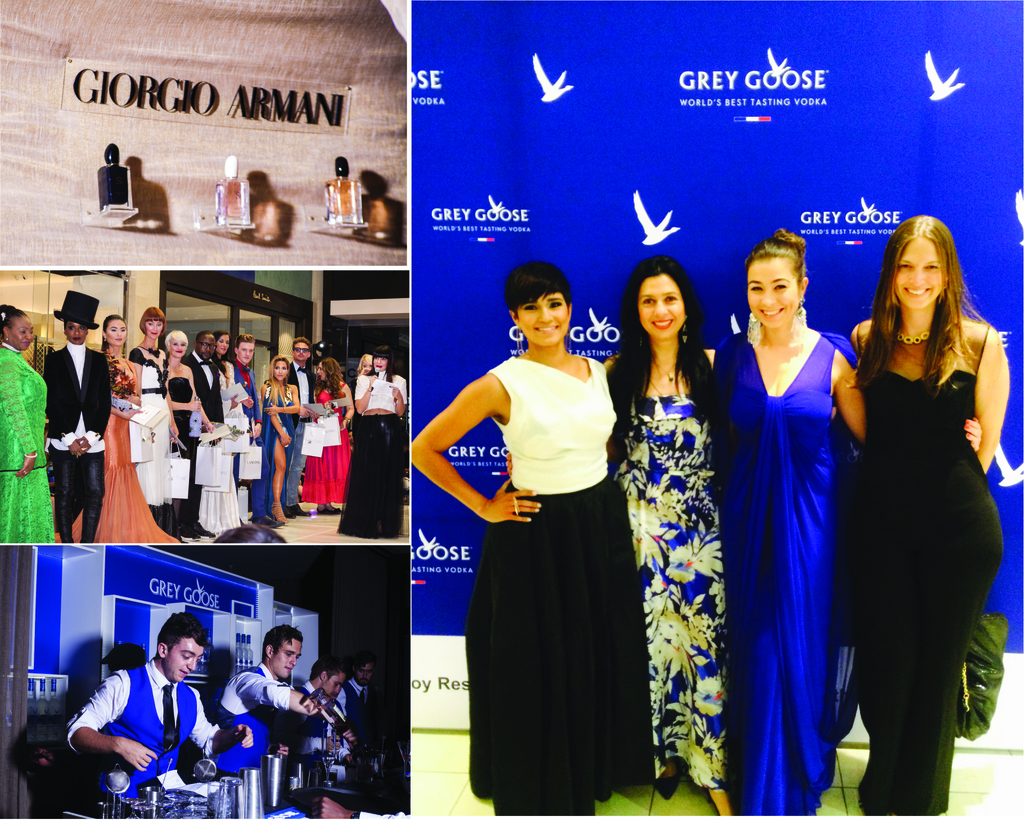 The proceedings were followed by a floating dinner party at the Southern Sun Hyde Park Hotel #tsogosun on the lifestyle level with breath-taking views overlooking JHB. On arrival at the hotel, guests journeyed down a 70-meter Blue Carpet, where they got their ‘Glow’ with Intraceutical glow mist while FoxBox treated guests to innovative signature nail art before heading to the ‘Oscar style’ pre-awards media pods, curated by Grey Goose. 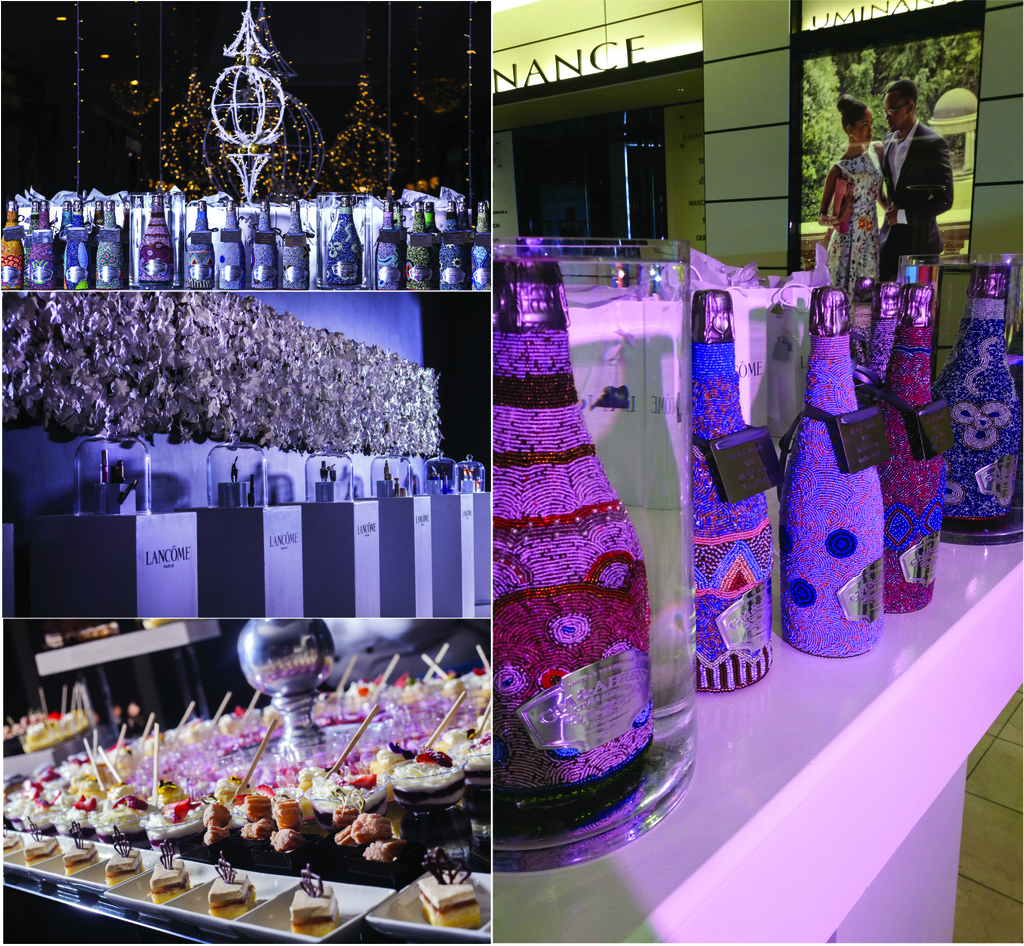 Delectable food was enjoyed by all, made by top Tsogo Sun chefs whilst sipping on Ashbourne & Southern Right Wines, Grey Goose cocktails, GM & Ahrens champagne, San Pellegrino & Aqua Panna waters. With selfies being a given at an event of such a nature, we also snapped away at the photo animation Balloon Pit all the while enjoying DJ Kimmy K’s party vibes.

For more information on the SA Style Awards, go to www.zebrasquare.co.za

*And now for a story told by Lancôme and Giorgio Armani in celebration of years of success:

Lancôme
“For 80 years, La Vie Est Belle en Lancôme.” Indeed, life is beautiful with Lancôme.
The history of Lancôme is like a great film. A movie about women.
For its 80th anniversary Lancôme paid tribute to its iconic products by recreating limited editions of them and super-deluxe re-releases of some of the first creations by the House.
Two years after its launch, La Vie Est Belle continues to impact the lives of women the world over, its message more fitting than ever. It invites women to indulge in the freedom to be yourself, to make your own choices. This is perfectly in line with the quest for happiness led by women today. Its name, a real declaration, it’s now iconic bottle, the crystal smile and its one-of-a-kind olfactory signature appeal to women, that creates a lasting bond with them. Every element of La Vie Est Belle, from the packaging, to the campaign, the irresistible scent with its superb raw materials, is imbued with emotion and accuracy and perfectly reflects the aspirations of women. Not to mention the incredible smile of Julia Roberts, one of the most beautiful in the world. Julia has a special place in people’s lives. She is the actress who makes you believe in the possibility of happiness.
Grandiôse, the first swan-neck mascara, bent to work with the shape of the face for unprecedented access to every lash. Corner to corner, from root to tip, meeting the needs of millions of women for ultimate length, volume and lift.
Lancôme established the skin-perfecting care category, through Genefiique. Life is made beautiful for women the world over, with delicious sensations, provided by skincare at the cutting edge of scientific innovation. Like Advanced Génifique which targets the 10 key signs of youth with noticeable result in just 7 days. Visonnaire became the first Lancôme skincare product capable of fundamentally recreating a perfect skin visibly correcting woman’s wrinkles, pores and skin texture. Lancôme’s scientific innovations led to the revolutionary discovery that confirmed the rose native cells can extend their properties to enhance the skin’s regenerative potential. In Absolue l’Extrait each jar contains up to 2 million unique rose native cells.Lancôme’s skincare products have become an intrinsic part of women’s daily lives.
The launch of Gloss In Love, echoes Lancôme’s belief in happiness. Since its launch in 2013 it has become the must have accessory for every woman on the go. . Synonymous with femininity, freshness and resolute modernity, this ode to light trapping mother of pearl is the dream gloss of every woman.
Teint Idole is an ongoing love story between Lancôme and women. Created in 1997 to fulfill the expectations of the most demanding women seeking a morning-to-evening flawless complexion, Teint Idole was the first ever foundation to reconcile the irreconcilable: long-wear and comfort. Initiating a genuine revolution in make-up, its success was instant and remains unchallenged.
An undisputed idol, today Lancôme’s Teint Idole Ultra 24H remains the faithful guardian of women remaining steadfast in all conditions providing flawless coverage and a unified complexion with no need for touch-ups. Skin is immaculate and shine-free. For 24 hours. The perfection of an idol.
Today as over these 80 years, Lancôme offers all women the freedom to flourish. To embrace the “je nais sais quois” of French women, to cultivate her own happiness as a way of life, always standing out from the crowd without ever trying to, seemingly effortlessly.
Indeed, life is beautiful with Lancôme.

SI
With the creation of Sì, Giorgio Armani pays tribute to femininity.
“Sì is my tribute to modern femininity, an irresistible combination of grace, strength and independent spirit.” – Giorgio Armani
Each day brings its own questions. How will live you this moment, this day, this life? Nothing is more powerful than Si….
Behind the perfume signature, Giorgio Armani has breathed new life into the brand's femininity and sensuality. Mr. Armani invites all women to express their own individual femininity, encouraging them to be audacious, real and honest!
The Armani Si woman is a woman of emotion. She is a woman who fully lives, and feels deeply. Without doubt Cate Blanchett is the personification of SI and embodies Armani’s fulfilled woman, combining her personal and professional life. Cate Blanchett is vivacious in the latest campaign as the face of the franchise. She is the ultimate Si woman. She expresses emotion and strength; she dares expressing her sensuality while retaining control.
Following the worldwide premiere of the new Giorgio Armani Communications released on the 13th of September 2015, a new TVC and print visuals, she stuns in the latest campaign wearing the signature Giorgio Armani Couture Gold dress, the signature communication of Si for this Christmas.
The SI franchise consists of three fragrance signatures:
SI EDP
Giorgio Armani Si EDP was launched in 2013 and is a declaration of femininity.
Luminous, charismatic and sophisticated, she is the very essence of chic Italian style - powerful and distinguished.
When “Rose meets black”… a new enthralling chypre, built on black fruit. Its olfactory signature is rhythmic, elegant and unique. It combines an inflection of three accords, blackcurrant nectar, modern chype and light musky wood.
SI EDP INTENSE
In 2014, Giorgio Armani revealed a stronger more sophisticated version with Armani Si Eau de Parfum Intense. The Intense Parfum is created for the woman who believes nothing is possible without passion. She is strong, brave and not afraid to leap into the unknown hence the dense, richer fragrance. Described as a modern chypre fragrance. Its top notes are accords of cassis and blackcurrant heart extract. There are also fresh notes of mandarin and bergamot with a silky touch of freesia. The heart grows with essence of May rose and neroli absolute, with additional accords of davana and osmanthus. The base features patchouli, vanilla, ambroxan and woody notes.
SI EDT
Giorgio Armani Sì Eau de Toilette launched in February 2015. Sì Eau de Toilette is a lighter version of the original. The scent is romantic, fresh, youthful and more energetic. SI Eau de Toilette invites you to say "Si" to simplicity, joy of life, dreams and independence.
The fragrance is composed of fresh notes of "Neo Jungle Essence", blackcurrant, green pear, Italian bergamot, mandarin and neroli oil with the floral heart of freesia and May rose. A touch of musk, amber wood, vanilla and patchouli.
Each quarter Giorgio Armani reveals a new look for his muse as Cate Blanchett is recreated to inspire all women to say Si. For her less is more, her greatest sophistication is her simplicity. Nothing about her is plain…Her commitment and desire for frivolity; her strength, and her softness; her completely elegant sensuality; her thirst to live in freedom. As the Sì woman, Cate Blanchett depicts freedom in her vision of the world and living out that vision. She is free in a world full of possibilities.
She represents the calm strength of femininity and courage, the courage to say Sì, and to state it enthusiastically. The decisions she took with her heart and what she really believes in are the reasons for her success. She is the author of her own life. The secret of her power is her audacity and courage to say Si.
The only answer is Si… she is the walking embodiment of energy in motion ….her magic affirmed. She exists in what is and seems to be. She dares…For her the possibilities are limitless.
Now Giorgio Armani invites you to #SaySi to all your life’s key moments
This Christmas #SaySi with Giorgio Armani and The Couture Bow. At Giorgio Armani elegance is an art. We invite you to…
Celebrate the art of gifting this festive season with Giorgio Armani’s Couture Bow
This Christmas Giorgio Armani invites you into his world of dream and desire, to be enchanted and transported through the gift of giving. Nothing so symbolises the bond from one to another as the ceremonious act of gifting, an outward expression of a unique bond.
This year’s Giorgio Armani Christmas campaign is inspired by Mr. Armani’s 2011 Armani Prive Fall/Winter fashion collection where an origami folded couture bow made from straw took Milliner, Philip Treacy, two months to craft.
It is in this spirit that Giorigio Armani reveals his Couture Bow this Christmas, constructed from abaca fabric; it’s a symbol of the art of giving evoking the ties that bind us to each other. The couture bow of Giorgio Armani is artful elegance, it’s a display of affection culimintating in the perfect gift that touches.
This signature bow, is a symbol of festive elegance and generosity.