passion of the panoramic view 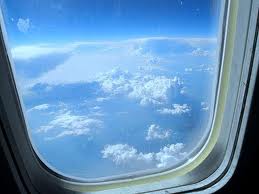 Seems to be that I’m the last of the good flyers. What with turbulence, terrorists and the trauma of confined spaces, flying has become a trying experience for the majority of passengers. Seemingly, however, these conditions are easily erased with a simple swig of a single malt. As a crew of inebriated individuals inhabited the aircraft, it appeared that inhibitions were checked out at check in.

Now even though flying makes one feel freer than free, the freedom offered is one of the most constrictive of one’s life. Cramped next to a couple I am convinced were surreptitiously indulging in a stolen weekend away from their respective spouses; I was privy to their perpetual public displays of affection. Move over Christian Grey, it was apparent that a healthy portion of the passengers were members of the Mile High Club.

Cue couple two, who are having a domestic over drinking on board…to drink or not to drink, that is the question…Bottoms up, and the issue instantly resolved, there was banter and beers 10 000 feet above sea level, which served as a sensational start to the trip of a lifetime.

Who would have thought that the invention of the passport, courtesy of King Henry V, all those years ago would have initiated the impulse to a penchant for discovery. Travel is the toughest tutorial of all; and despite the degrees I have on paper, I owe my education to experience, collecting cues from colourful and colonial cultures; from Great Britain to Goa, Colorado to Caen.

Cut to the buxom bottle-blonde to my left. Locking eyes with me every time I so much as moved, had my entire body in a spasm by the time we touched down. I felt like a mischievous maiden under the watchful eye of a lady in waiting. Did I mention that this particular creature was an exceptionally paranoid specimen? She imagined every sound imaginable, and harassed the passengers in her proximity byrepeatedly reciting the rules and regulations of flying.

I have to laugh, it’s like going on a blind date, and we know how uncomfortable those can be. As you make your way down the aisle, you silently pray that you’re not sitting next to the hefty heavy breather, or better yet the six foot tall small talker, or the prehistoric pensioner who complains from take-off to touchdown. You would be most unfortunate to squeeze in next to the sleazy salesman, selling his services to anyone who would listen.

As much as I love flying, it certainly tests tolerance and tries patience, treading on the thinnest of ice at times. Travel has taught me to try anything at least once, to trust my instincts, and to transcend boundaries.I truly feelthat my passport is testament to who I was, who I am now, and those blank pages are tribute to who I will ultimately become.

Free as a bird amongst the clouds, yet as confined as a caged animal, the paradox lies in this panoramic party in the sky…Of all the challenges one can be faced with 10 000 feet above sea level, one of the easiest to overcome will be…chicken or beef.

Comment by alexandra avgitidis on July 10, 2012 at 23:50
Love reading your blogs Passionista:)

This is why we should all have our own private jets!