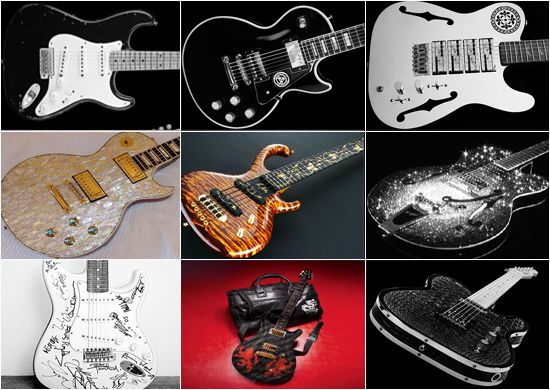 Ok, so in my line of dreams, guitars have never really been an option for me. I prefer the drums, but for those of you who are guitar fanatics, I have found something that is worth talking about, I’m not going to lie, they are beautiful to look at and I’m sure if I knew how to play one my thoughts would change.

Guitars which are vintage, rare, owned and of course played by rock stars and guitar Gods which we have all drooled over are sold for prices that earn them the status of being the most expensive in the world! The focus here remains on the price, the novelty values in the guitar that makes them unique and of course collector’s edition’s. Some of the guitars that are featured here come with gems, decorated to the nine’s with solid gold, crystal studded, artistically painted by hand and of course some of them come with a lot of history behind them. Some are embellished with Swarovski crystals…Ok so I’m sure you get the point! Take a look at the world’s most expensive guitars and how much it costs to own them. This unique Fender Stratocaster Guitar was shown as one of the most notable things in order to raise money for the Reach Out to Asia charity. Auctioned off in Dohan, Qatar at the Ritz-Carlton hotel, this masterpiece has been autographed by many music legends, inclusive of Keith Richards, Ronnie Wood, Rolling Stones’, Mick Jagger, Eric Clapton, Paul McCartney, Led Zeppelin’s Jimmy Page, David Gilmour, Bryan Adams and many more. The Fender Stratocaster was autographed in the support of the charity; it is noted for its strong white build and its silver accents that can be found around the top end of the guitar’s neck. Her Highness Sheihka Miyyassah Al Thani, heir to the throne of Qatar was the one who claimed ownership of the guitar for an enormous $2.8 million, the proceeds were donated in order to support relief efforts in Asia, devastated by the Tsunami. Once owned by Eric Clapton himself, the Fender Stratocaster guitar, affectionately named “Blackie” is an iconic piece of rock ’n’ roll history, and is one of the world’s most coveted guitars. The mid 1950’s saw this guitar pieced by Clapton himself from various individual guitars, and it remained his main guitar throughout the 70’s and 80’s. Many of his albums were recorded with Blackie, but on 24th June 2004 he said goodbye to Blackie at Christie’s Auction House, New York in order to raise funds for his founded organisation “Crossroads Centre Antigua”, an international centre for healing, a treatment facility for addiction disorders. America’s leading professional audio and musical instrument retailer, known as “Guitar Center” purchased Blackie at an auction for a massive $959,500, taking on the record as the world’s most expensive guitar. In addition to these proceeds, Clapton allowed limited edition Blackie replicas to be made, which sold in just over 7 hours at a price of $20,000. 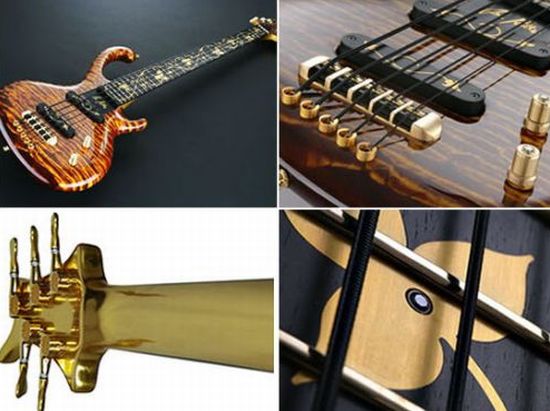 German luthier, Jens Ritter, crafted an ornamental piece known as “Flora Aurum”, this gold and diamond coated Ritter Bass was up for grabs for $ 250,000. It features a pure gold encrusted floral inlay whereby each leaf was decorated with black diamonds that were set in platinum. Two flawless 3,3ct diamonds sit on top of the two knobs while little green diamonds serve as the knob position markers. So not my style, but exclusively handcrafted, the body is one piece highest figured quilted maple while the nut is crafted out of 10,000 year old mammoth ivory. But even with all of its bling, it is still not pronounced as the most expensive bass. Ritter crafted this beaut because he believes that "More and more people do not just want a tool for their job or hobby, they want a piece of culture. This Gibson Les Paul guitar is certainly one of a kind; it was customized by Rock Royalty with a factory painted black body and a white trim. The guitar featured four Rock Royalty custom guitar volume knobs along with 24.56ct black and white diamonds that were set in a silver finish with 22ct yellow gold rims and black ruthenium. Now were talking! Furthermore, this guitar’s tuning keys were handcrafted which were decorated with 17.52ct black and white diamonds that were again set in silver finished with black ruthenium. The pick, also handmade in sterling silver with black-hand painted enamel and 22ct gold border which featured a Rock Royalty skeletonized 1/1 logo in yellow gold. Ok so who is willing to support my charity? Collecting of art and sculptures has been surpassed by musical instruments, and I have absolutely no objection to it! C.F. Martin & Co. have produced a unique guitar named "History of Flight" in order to honour the legacy of air and space travel. History of flight, designed by Master Luthiers and celebrated artist Larry Robinson, is a tribute to technology that defined the 20th century. Made from supreme materials, this unique guitar has Brazilian Rosewood on the back and the sides with a solid Adirondack Spruce top. The Guitar comes complete with a Martin carbon fibre case and a “Making of” DVD that features footage of Larry Robinson and the Martin factory. This masterpiece is up for grabs, well if you have the US $150,000 that they are asking for! 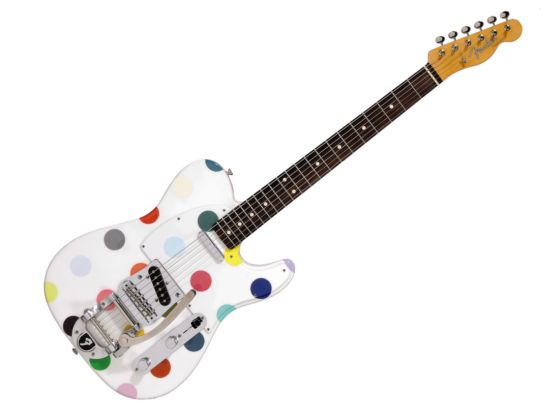 Known as the richest artist in Britain, Damien Hirst is known for his outstanding artworks, and there’s no questioning why. His artistic way of thinking has crossed over to taking a Fender Stratocaster guitar that was used in the late 70’s band “Squeeze”, which dates back to 1954 and hand painted art-instrumental. This legendary guitar will be auctioned at Christie’s Post-War and Contemporary Art sale in London on September 14th. The Stratocaster has been used in many performances by your icons, such as Buddy Holly who featured and played it in 1958. The auction house is expecting to fetch $25,000 for this iconic guitar and the proceeds of this sale would go to the cancer charity organization “Love Hope Strength Foundation and Teenage Cancer Trust”. Last year more of Damien Hirst’s masterpieces such as the Louis Vuitton Travel Case, Artistic skateboards and the most renowned and his most controversial blinged baby skull were other artworks of his that were auctioned off.

One of the most expensive Fender electric guitar’s known to man, named ‘Midnight opulence’ is notable for being encrusted with different types of jewels inclusive of citrine, diamonds, peridot, emeralds and blue topaz. Celebrity master builder Yuriy Shishkov from Russia fashioned this baby from scratch. The wires of the guitar are hand hammered from fine silver and a rose gold design. Swee Lee Music Company brought the guitar to Singapore after winning the bid at the National Association of Music Merchants in Los Angeles and now the guitar is available for sale in Singapore for the price of…$90,000. Reports show that around 15 people are interested in purchasing the guitar inclusive of celebrities and buyers from Malaysian and Brunei Royalties. Anyone want to club together? 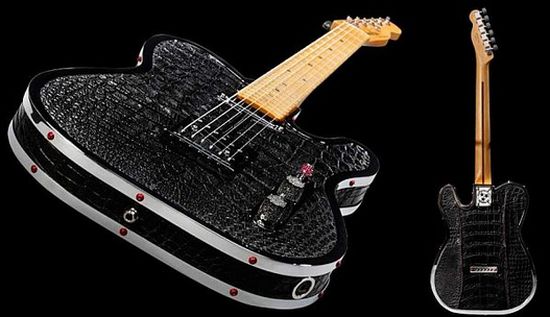 Custom alligator skin, diamond and silver Fender Telecaster guitar…Wow what a collection. This Nashville based luxury design house Rock Royalty is sure to lure guitar lovers in with its elegance and fine handmade sentiments. The one of a kind KAGED alligator guitar with a Fender Telecaster body is covered in fine, natural black alligator skin from Louisiana. With Rock Royalty’s patent-pending steel cage, chrome finish and red aluminium screws, this undeniably, gorgeous guitar flaunts black diamond and sterling silver volume knobs, the selector switch is decorated with rubies and 6 handmade diamond tuning keys set in sterling silver finished with black ruthenium. The Rock Royalty KAGED Alligator Custom Guitar with its high end specs goes for $85,000, and for an even better, pricy option, if something else is what your taste buds fancy, you can always opt for the $125,000 Rock Royalty’s custom Gibson Les Paul guitar. 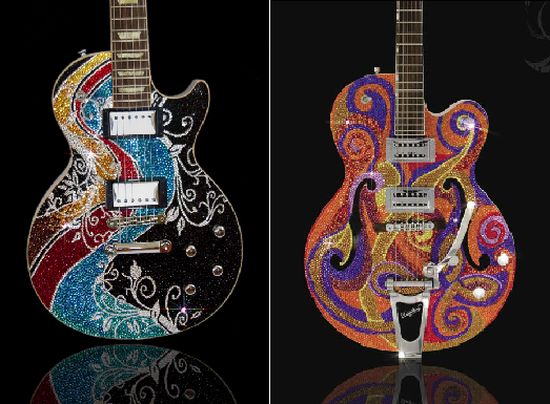 These days, it is difficult to separate the worlds of glamour and music. Amanda Dunbar’s Precious Rebels Art Guitars are plastered with colourful, shimmering crystals and blinged out to the nines. Seems like the canvas days are long gone! These beautiful sculptures guitars go for $15,000 to $75,000 and are an absolute innovative integration of technology and art in the form of playable music, display and enjoyment. So far Dunbar has created more than 30 guitars such as the "Capri Tiger," which features a metallic blue-and-black tiger crystal design and "The Parisian," which is an intricate black-and-white swirled number. The Grammy Awards have brought her into their scene as well, requesting a guitar that will be used to commemorate their 50-year anniversary, her reply, a Gibson Black Beauty Les Paul with predominantly jet-black and black-diamond Swarovski crystals. They are unfortunately not for sale to the direct public but apparently a major retailer is looking into carrying the line, and musicians and others in the music industry have also shown interest.

The limited edition Gibson Zakk Wylde Bulls Eye, known for its mammoth tone and over-the-top rock attitude has been stripped down to become the definitive glitzy instrument. It was commissioned by an anonymous Monaco-based British celebrity, and ended up being encrusted with 4,000 individual Swarovski crystals - each measuring exactly 4mm in diameter and covered in 24-carat gold. The brains behind this one, Kim Webber Guitars and gold-plating specialist from Gold2U, who imported the instruments 24-carat gold strings from Germany. It also features a maple neck that has been plated with 24 carat gold frets. The final product is estimated at around $24,200. 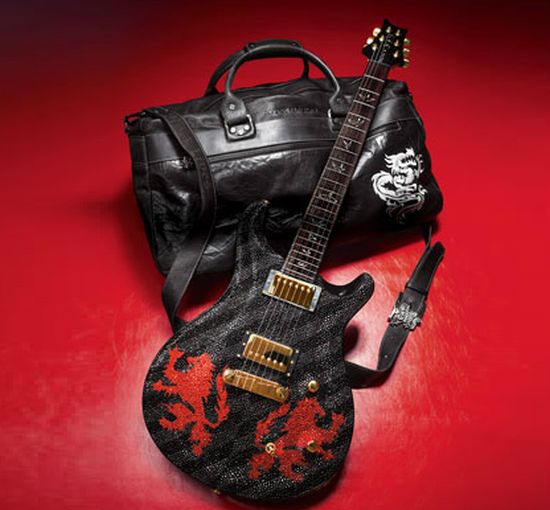 For every one of us, the idea and taste of music is different, and it applies to everything. As some of you would probably like the diamante, blinged, glitz guitars, I so love this one! Amanda Dunbar transforms an American classic “Paul Reed Smith electric guitar” into a playable work of magical art known as the “Lions Rouge”. Limited to 5 creations, and fashioned with Swarovski crystals for Dunbar Studios, the price goes for $22,750. “Lions Rouge” features mahogany neck and rosewood fingerboard, each signed by the artist and has a radio frequency identification tag for security. 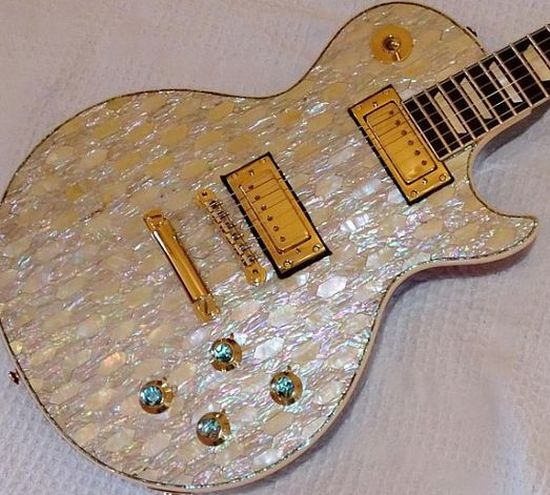 After the 25/50 special edition and Firebird X, the Gibson Les Paul deluxe guitar which gets a 24 carat gold and pearl makeover. Created by expert luthier, Kim Webber, each element of the guitar string has been individually coated with gold, apart from applying the precious yellow metal on the body. Mother of Pearl stones and shells were installed, apart from recreating the mini-pickups in bronze, which has now been turned into a once off piece of art with a pricing of £10,000 ($15,875). Webber received the guitar in bad condition, meaning that it had to be taken apart and individually rebuilt, whereby most of the construction needed to be redone according to the demands of the customer. He needed to use white mother of pearl, as well as its golden variety on the inner layering of the guitar, the mini pick-ups of the guitar also needed to be reconstructed which was done by a local metal worker, it was then plated with 24-karat gold, as well as the strings, and then finally installed on the instrument. Webber has made numerous one-off instruments for collectors, one included 4,000 Swarovski crystals.

Damn! the last one is made for me