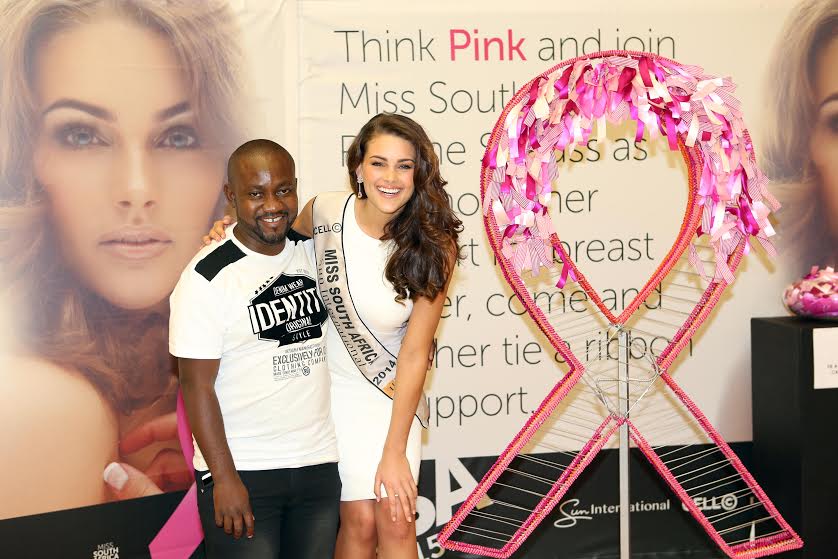 Miss South Africa, Rolene Strauss, is a woman on a mission.  The fourth year medical student, who has put her studies on hold during her reign, feels strongly about the subject of breast cancer and making more women aware of the benefits of early detection of the disease.  She is pictured above with Dickson Nyamasoka who made the giant beaded ribbon. (Pic by Debbie Yazbek)

Strauss has launched a breast cancer awareness campaign with the unveiling of a giant wire exhibit outside Stuttafords, at Sandton City.  It is hoped that this will draw attention to the issues surrounding breast cancer and shoppers will be asked to support the cause by tying a pink ribbon to the work.

Strauss is a health fanatic and believes a healthy nation is a strong nation: “South Africans have the right to be healthy. However, just as much as it is our right it is also our responsibility to take care of ourselves and be educated around breast cancer.”

She continues: “As a young woman who is passionate about health and women, I feel that by creating awareness around breast cancer, I am putting the ball back in the women's court. You can reduce your risks of getting breast cancer while early detection means a much greater chance of winning the battle against the disease.

“When a woman falls ill, it is not only her who is affected. The effect is like a pebble falling in a pond. It is also her children, husband and family who become 'ill' with her. Creating awareness can save many lives.

“I definitely think that many women are aware of breast cancer but there can never be enough education on the topic. It is a disease that always creeps up on women. Everyone thinks that it couldn't happen to him or her. This is a common disease and it is real. We have to keep fighting against it, particularly as many younger women are being diagnosed with breast cancer.  “It is so critically important for women, especially young girls, to know how to do a self-examination. It is the first line of defence and early detection is key. It needs to be done every month or even week if possible.”

“Women from the age of 30 should go for regular mammograms and sonars. Women need to know how to reduce their risks; a healthy lifestyle, diet and exercise, maintaining a healthy weight, no smoking (even secondary smoking) and limited alcohol use all help in the battle against cancer.”

The exhibit will be on view outside Stuttafords, on the upper level, for people to tie a pink ribbon. It will be there until October 29.