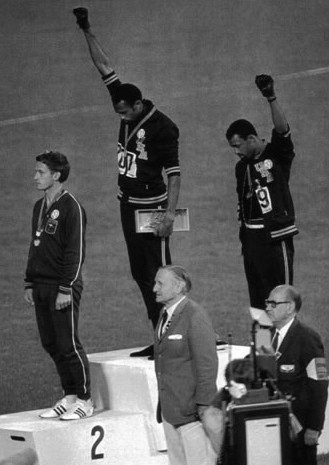 In the 200 m medal award ceremony, African-American athletes Tommie Smith (gold) and John Carlos (bronze) raised their black-gloved fists as a symbol of "Black Power". The Australian Peter Norman, who had run second, wore an American "civil rights" badge as support to them on the podium. As punishment, the International Olympic Committee banned Smith and Carlos from the Olympic Games for life, and Norman was left off the Australian 1972 Olympic team.

This image has iconic status today and represents so much to so many. Very interesting to note how negative their reception was on arrival in the US.

Looking at this footage I cannot help but ask myself-should the Olympics be a platform for protest?

The answer may be found with the ancient Greeks where warring parties would lay their arms to rest for the festival called the Olympic Games. Once the games ended, the war resumed.

I suppose, it all depends on how strong you feel about a particular cause. Either way this moment is truly iconic.