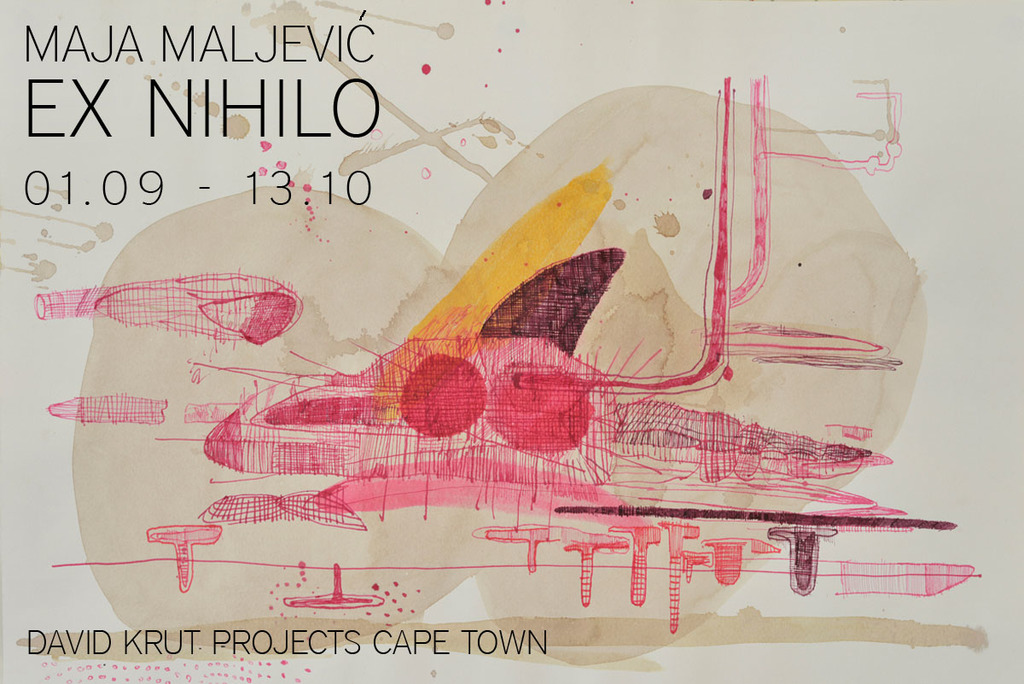 Ex Nihilo presents a new body of paintings and drawings by Maja Maljević for the first time to a Cape Town audience. The show runs from 1 September to 15 October 2012. Please join us for the opening of the show on Saturday 1 September at 11.30am at David Krut Projects Cape Town, Montebello Design Centre, 31 Newlands Avenue.

I don’t know what a painting is; who knows what sets off even the desire to paint? It might be things, thoughts, a memory, sensations, which have nothing to do directly with painting itself. They can come from anything and anywhere. – Philip Guston

The term ex nihilo, most commonly used in association with concepts of creation of the universe, is a Latin phrase meaning “out of nothing.” Outside of religious and theological contexts, the term is often used to describe anything – a topic of conversation, a solution to a problem – that appears to have no referent or antecedent, therefore seeming to come into existence independently. In this sense, the term is appropriate to the paintings and drawings of Maja Maljević.

Often, the temptation in a viewer of abstract work is to look for clues that can unlock the “meaning” of the painting, or illuminate the source of the artist’s inspiration. An inclination toward narrative leads us, as viewers, to search for objects and concepts to which we can relate. While we may be comfortable with a rejection of representation, and we understand that surface and materiality are pivotal, we struggle to avoid analysing shapes and lines in terms of their similarity or allusion to things we know. Perhaps if we can correctly decipher and connect a number of elements within a painting, we will have access to the intellectual process that brought the painting into being. We will know then what the artist is trying to say, what she thinks about the world.

However, in the case of Maljević’s work, these attempts are quickly frustrated because the work, ultimately, doesn’t “mean” anything at all. This is not to say that the content of the work does not derive in some way from the world. The experiences she has had, the memories she draws on, the dreams that haunt or inspire her inform particular impressions of the world she lives in. No man is an island, so to speak. However, she is a unique filter of this material, and expression of it does not rely on intellectual processes. Rather, her act of creation is experiential and emotive, governed by aesthetic concerns and a sense of balance and proportion that is particular to her.

Although the universe that Maljević creates appears referentially disconnected from the world she inhabits, common threads bind the two. Investigations of the notion of beauty are carried out through faithfulness to Golden ratio proportions and balance of line and colour, for instance. The importance of symmetry, in Darwinian terms, is also revealed as a factor – what role does a search for perfection play in the production of artwork? Evolution itself is evident in the progression of Maljević’s work over time as new configurations are born in each body of work, fed by previous imagery, and some shapes and structures are carried over from one body to the next while others disappear.

Hence, although we think we may recognise a television test pattern, a chess board, an aeroplane or a snow man, following conventional associations with these things ultimately leads nowhere. Maljević is not concerned that the shapes or drips or blocks of colour might resemble things in the world outside the painting – the work is a world in and of itself, appearing to have sprung up ex nihilo.

To view more images from the exhibition, click here.