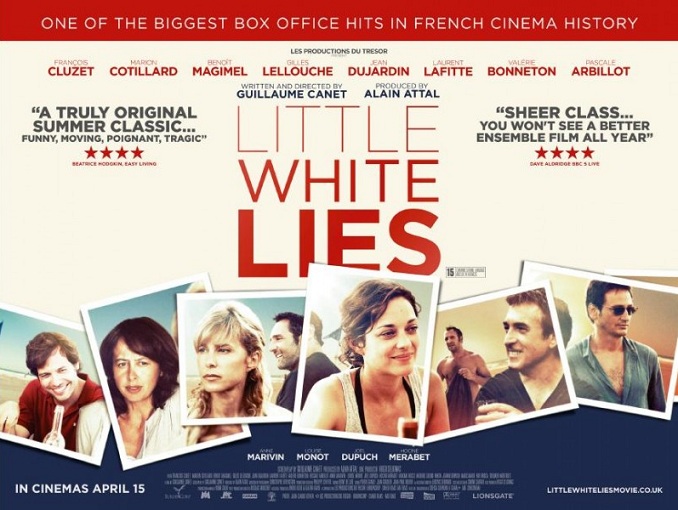 Oscar-winning French actress Marion Cotillard grapples with the emotional fallout from an unfinished tryst as the bisexual Marie in today’s exclusive clip from an ensemble drama Little White Lies (Les Petits Mouchoirs). Directed by Cotillard’s long-time partner Guillaume Canet, the film unfolds on the beaches of Lège-Cap-Ferret near Bordeaux, where a vacationing group of friends negotiate sexual politics and a web of secrets and betrayals over copious bottles of vin rouge. "Most of the actors are friends, and this place in the south of France is where almost all of us go for vacation,” says Cotillard, who, aptly, plays an anthropologist in the movie. “It was weird for us sometimes, having a different name and different behavior, but also parts of yourself in your character. It created a dynamic which could be uncomfortable but really interesting." Canet (who also directed 2006 thriller Tell No One), was inspired by Lawrence Kasdan’s college-reunion drama The Big Chill and John Cassavetes’ tale of middle-aged ennui, Husbands, for his part-improvised script, which also stars François Cluzet and Jean Dujardin.

At two and half hours long, there was always going to be pressure on Canet to present us with a truly watchable comedy drama in order to live up to the thrilling success of his previous release, Tell No One. Fortunately for Canet, Little White Lies triumphs in this. The well-matched ensemble cast compliments a plot that exclusively focuses on the sentimental nuances of intertwining relationships, and this makes for a fascinating, and at times intensely voyeuristic viewing experience. With an understated yet effective acting style that cradles seemingly small sentimental moments in the film, it’s clear that Canet has really given the actors space to let the tension of these moments play out with emotive pregnancy. It is in fact the non-verbalised communication between the characters that provides such mesmerising performances. A memorable example of this is the airport scene between characters Éric (Lellouche) and Léa (Louise Monot). As Damien Rice’s Cold Water bleeds from the soundtrack, what heart-felt dialogue is passed between the two is not known, nor is it needed to be.

The sense of intrusion felt whilst watching the film is further assisted by Canet’s cinematographic approach. Again, it’s that awareness of distance and space achieved with a distinctly European art-house style of camera work, yet thankfully, it is not in any way jarring. The more up-close-and-personal filming has been saved for when it really counts, and moments such as a tormented Marie (Cotillard) watching her visiting lover from the sidelines as he performs a song to the rest of the party, come with gratifying immediacy. Furthermore, idyllic scenes such as Max’s yacht taking the friends to a charming restaurant-clad island as they quaff on yet more sunset-tinted glasses of Rosé, evokes that holiday romance that is so easily instilled within any sun-seeking Brit.

The plot starts to voyage towards a tragic conclusion that both reunites the group and highlights each individual’s selfish deficiencies, as Jean-Louis (Joël Depuch), the uncle figure amongst the group reminds us of the film’s purpose, through a forthright speech about the importance of honesty with one another and themselves. What follows is an anticipated end to this French tale about the complexities of friendship, but it plays out with touching detail and realism, preserving Little White Lies as anything but a fast-food rom-com drama. The film tackles themes such as homosexuality, individualism, and unrequited love with originality and class, aided by the impressively heart-felt performances from a likeable cast. All this combined with a summery and exquisitely French backdrop, Canet has produced an amusing and highly captivating watch. Yes, it requires some patient viewing to see it through, but it’s well worth the time and an impacting delight that may leave you checking for sand in-between your toes.