Jason Wu, a Taiwanese-Canadian based, womenswear fashion designer, currently living in New York City, is most famous for designing Michelle Obama’s dresses for both of President Barack Obama’s inaugurations.  His first full collection debuted in 2006 which has seen him win numerous prestigious awards since.  He has dressed celebrities such as Ivana Trump, Leighton Meester, Diane Kruger, RuPaul, January Jones and Amber Valletta to name a few.

His Spring-Summer 2014 campaign, starring British Singer/Model, Karen Elson, portrays Wu’s elegant gowns in a beautiful, sensuous way.  He’s only presented two photo’s of his campaign to entice his fans a little and even stars in one of the shots taken at the famous Indochine restaurant in NY.  Earlier this year, the redhead bombshell, Karen Elson opened the runway show for this Jason Wu collection during New York Fashion Week so it was only natural to use her for her sex appeal again.

“There is something so unapologetically glamorous about these images that seem to embody everything that I adore and want to express through my clothes,” Wu wrote of the images through his Twitter.

Wu’s punchy frocks are intended “to be the life of more than just one party.”  His focus is on the timeless, not the trendy.  He’s been quoted as saying “I hope, I am the antithesis of disposable fashion.” We think you may just be Wu. 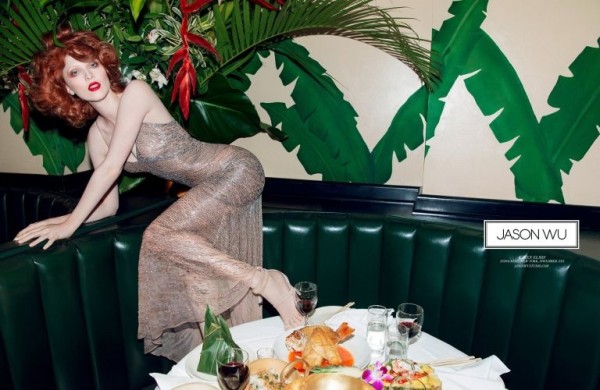