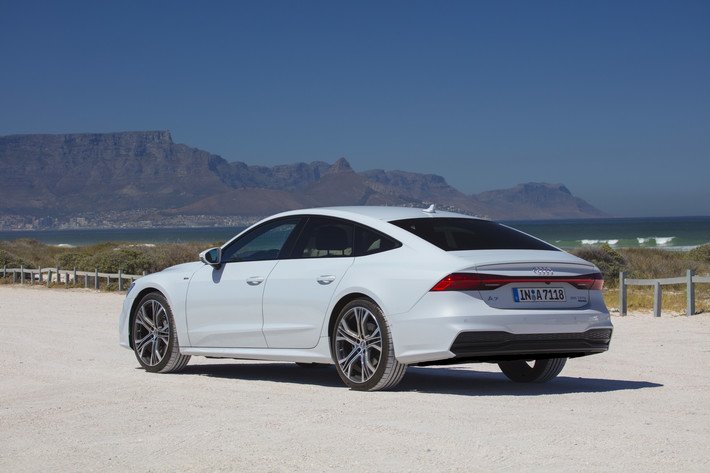 I will begin by saying I was excited to reviews Audi’s all-new A7 Sportback. My expectations were high based off my kinship with the previous generation A7 Sportback. A niche vehicle by any standards, but a special one nonetheless.

The A7 takes that concept of a traditional luxury sedan and modifies its aesthetic to mimic that of a coupé, while deeper within its mechanics features engineering enhancements that add to its dynamic drivability. Not a coup é but visually it has nuances of one. Not an out-and-out athlete but its sportier than a traditional large luxury sedan.

Unmistakeably different, the A7 was created to stand out. From its sharp lights with distinctive light signature via its upstanding front end with a single wide frame, and its coupé-like silhouette to its sculptural rear end, the A7 Sportback is an ambassador of a revolutionary language of design for the Audi brand. For any angle, the A7 Sportback is bold and very distinctive. It is never going to just “blend in”. Rather, it stands out without shouting. It is a motoring expression that conjures more than 1000 words. The new A7 Sportback celebrates sporty elegance and, as an ambassador of a new style, is a car belonging to the automobile avant-garde. Sharp lines and its coupé silhouette are expressions of powerful emotionality.

The lights with their own A7 signature highlight its progressive exterior. From the A-pillar placed far back, the roof spans as a flowing dome over the athletic vehicle body merging into a charismatic sculptural rear end with a continuous LED strip light. A unique appearance that it impressive even when stationary. Luxury abounds into a multisensory experience  – the standard multi-colour controllable contour-ambience light package directs the interior according to your imagination and offers the interior extra individuality and value. Precise optical fibres accentuate contours, emphasise dashboards and design structures, and enable a comfortable getting in and out in the dark. 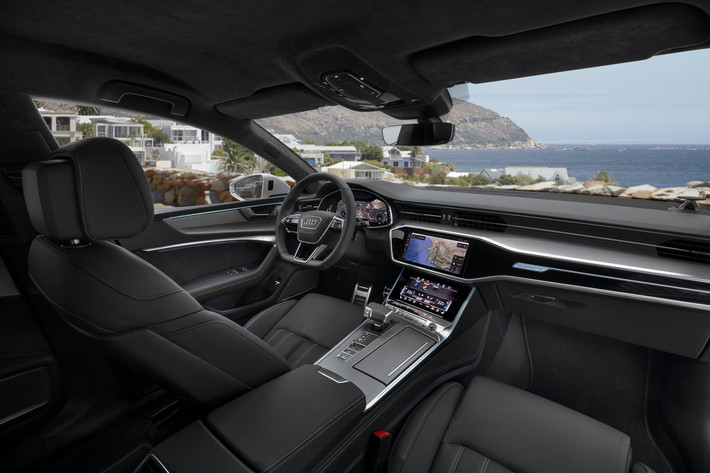 The A7 Sportback features a cockpit of a new era. Straightened up, integrated seamlessly and as if cast from a single mould: the high-resolution 10.1- and 8.6-inch HD touchscreens are incorporated into the dashboard seamlessly and give the progressive operating concept the centre stage it deserves. The driver controls the infotainment system on the upper display. The lower display provides access to air conditioning, comfort functions and text input.

The interior of the A7 Sportback is characterised by four essential values: progressiveness, sportiness, intuition and high quality. All the details, materials and decors underline the qualitative aesthetics  – from the basic version via the design selection to the S line sports package: premium character wherever you look. For example, selected and high-quality decors in natural Agate Grey burl birch wood, cleverly taking centre stage with interior elements in Sard Brown imitation leather with contrast stitching in Steel Grey.

Starting with the flattened, multi-functional sports leather steering wheel in 3-spoke design in perforated black leather, via the high-quality decors in matt aluminium, to the pedals and footrest in stainless steel.

The Audi brand are synonymous with intelligent lighting. The A7 takes one step further with digitally staged lighting. The High-definition Matrix LED spotlights, available as standard, express a new, unique A7 lighting language of design and address the issue of digitisation: separated by narrow spaces, 12 light segments are juxtaposed and create associations with the principle of the numbers 0 and 1.

Locally the A7 Sportback is limited to one engine derivative, 55TFSI quattro. Perfectly suited in nature to the rest of the vehicle, its 3.0-L V6 petrol motor combines mild hybrid intervention to boast 250 kW/ 500 Nm. Mated to a seamless 7-speed DSG gearbox refinement is a highlight. Quick (0-100km/h in 5.7 seconds) and frugal (average 8.5-L/per 100km), there is only but a subtle growl from the engine bay that are joined but faint murmur from the road and world around you. You are cocooned for the unnecessary, leaving you to focus on the luxury of driving the vehicle.

Hard to fault, but if I must, its four-wheel-steering system makes easy work of manoeuvring, especially in a parking area but when drive enthusiastically is rather light and vague. A small sensation that most won’t even feel.

How I began is how I ended my time with the new A7 – this is a magical vehicle that at the price competes with many SUVs. And, in my opinion, is better in many ways albeit placed lower to the ground.