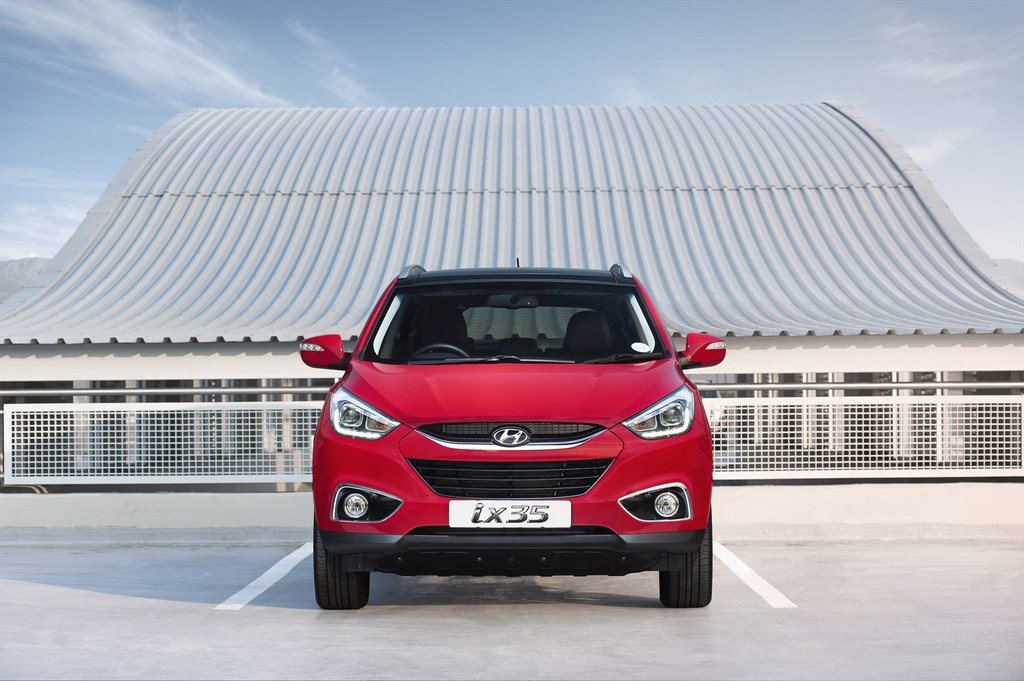 A cheesy headline I know but if I be honest, I borrowed the line from an ad campaign for Hyundai. It was designed to help consumers accurately pronounce the then emerging brand.

Funny enough having spent a week with the 2014 Hyundai ix35, my overall feeling when driving the car can be described by the lyrics of Lionel Richie’s song ‘easy like Sunday morning’.

The ix35 is a medium sized SUV. Its attractive lines and a well-proportioned scale make it a great urban family vehicle, though its alluring shape has been known to appeal to singles too. In fact, two solo friends of mine bought ix’s because it ‘looked good’ on them. 2014 sees minor but visible cosmetic enhancements to the ix. LED lighting which adds continuous ‘tube-like’ lighting on vehicles, with Aston Martin and Audi pioneering these design details on their ‘super cars’ like the DB9 and R8. So in keeping with what’s on trend and now somewhat commercial, Hyundai have added LED lights to their front headlights and rear to the taillights. The front of the ix has also been accentuated with stylish chrome details around the lower fog lights. 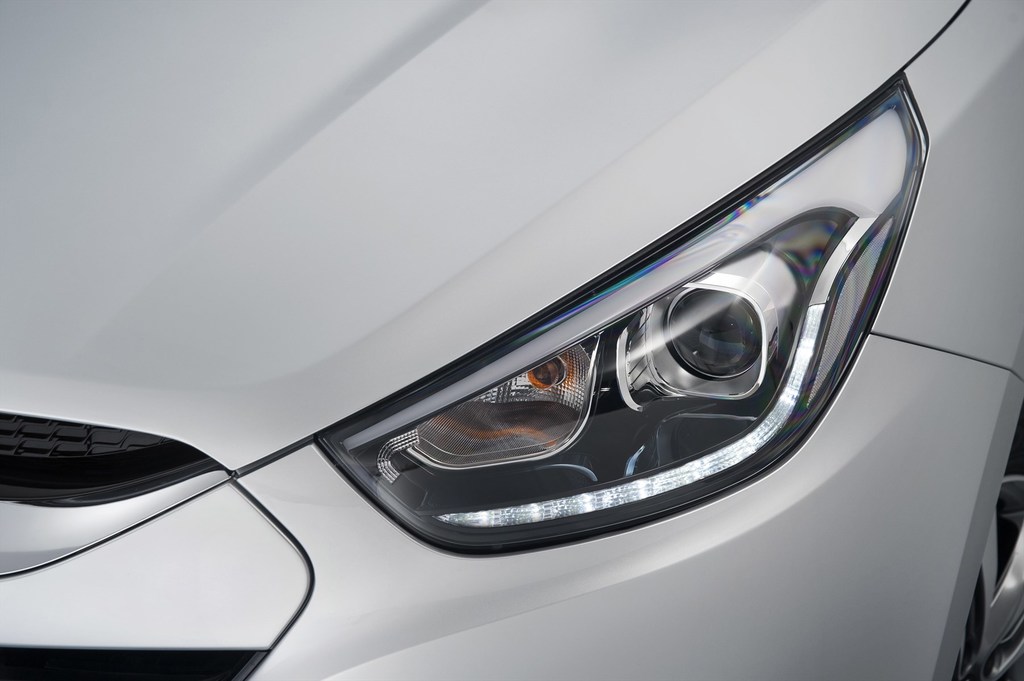 If you have seen the movie the Devil Wears Prada, you may recall the scene where Miranda Priestly, editor of Runway Magazine, calls a meeting to review garments selected for an upcoming shoot in the magazine. Her new naïve assistant, Andy, observes Miranda and her fashion editors deciding between two similar belts for an outfit. Andy sniggers because she thinks they look exactly the same.

Miranda Priestly: Something funny?
Andy Sachs: No. No, no. Nothing's... You know, it's just that both those belts look exactly the same to me. You know, I'm still learning about all this stuff and, uh...
Miranda Priestly: This... stuff? Oh. Okay. I see. You think this has nothing to do with you. You go to your closet and you select... I don't know... that lumpy blue sweater, for instance because you're trying to tell the world that you take yourself too seriously to care about what you put on your back. But what you don't know is that sweater is not just blue, it's not turquoise. It's not lapis. It's actually cerulean. And you're also blithely unaware of the fact that in 2002, Oscar de la Renta did a collection of cerulean gowns. And then I think it was Yves Saint Laurent... wasn't it who showed cerulean military jackets? I think we need a jacket here. And then cerulean quickly showed up in the collections of eight different designers. And then it, uh, filtered down through the department stores and then trickled on down into some tragic Casual Corner where you, no doubt, fished it out of some clearance bin. However, that blue represents millions of dollars and countless jobs and it's sort of comical how you think that you've made a choice that exempts you from the fashion industry when, in fact, you're wearing the sweater that was selected for you by the people in this room from a pile of stuff.

This quotation illustrates the descendant of high-end design into consumer friend product that now befits the ix35. 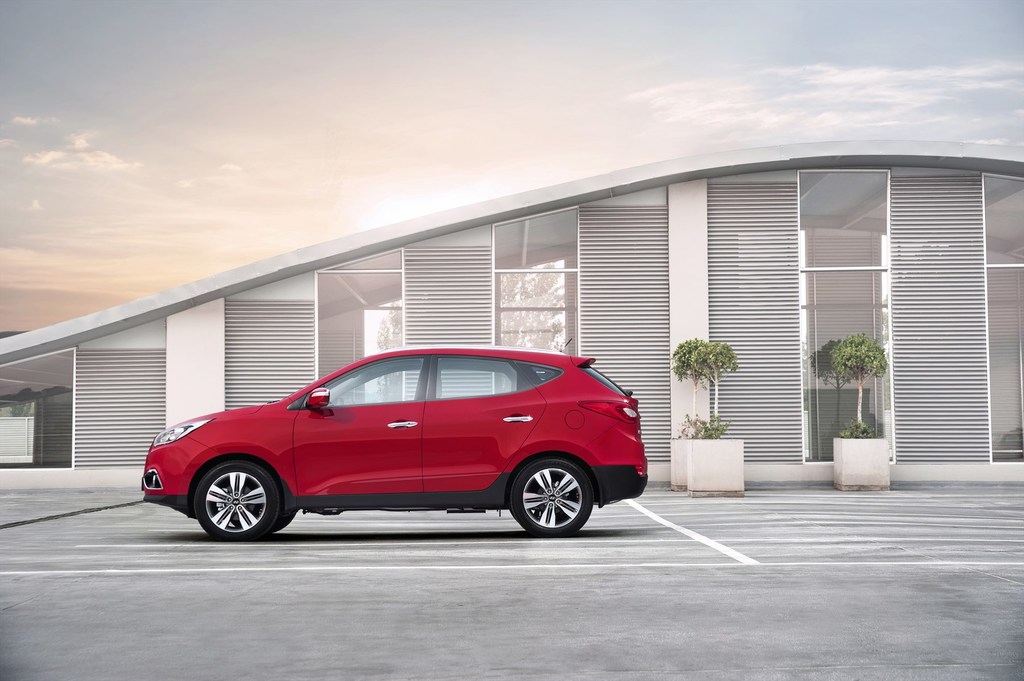 The ix35 really is easy like Sunday morning when it comes to driving the car. Its Sport Utility Vehicle classification is somewhat and exaggeration but its 2.0 engine is perfectly mated to a slick changing 6-speed manual gearbox. Though this marriage of engine and gearbox is one made in happy union, the ix35 isn’t going to win any drag races but will hit 100km/h in just over 10 seconds.

Its ride is set to the firmer side of life without being anywhere as hard as state prosecutor Gerrie Nel in the Pistorius trial. This firmer bias gives the ix a ‘sportier’ nature, rather than a wafting marshmallow that feels like the leaning tower of Pisa when your turn a corner or drive through a bend. The ix comes loaded with features: One in particular affects the steering feel of the ix making it possible to adjust between three driving modes – normal, comfort and sport. This essentially allows the driver to vary the level of steering support and feedback to best suit the environment and driver mood.

Dynamically the overall feeling on the road is relaxed without being sloppy, but the ix isn’t a driver’s car. It makes you feel peaceful. It’s very comfortable drive and quiet manner makes me think that the ix should be classified as an RUV (Relaxed Utility Vehicle). 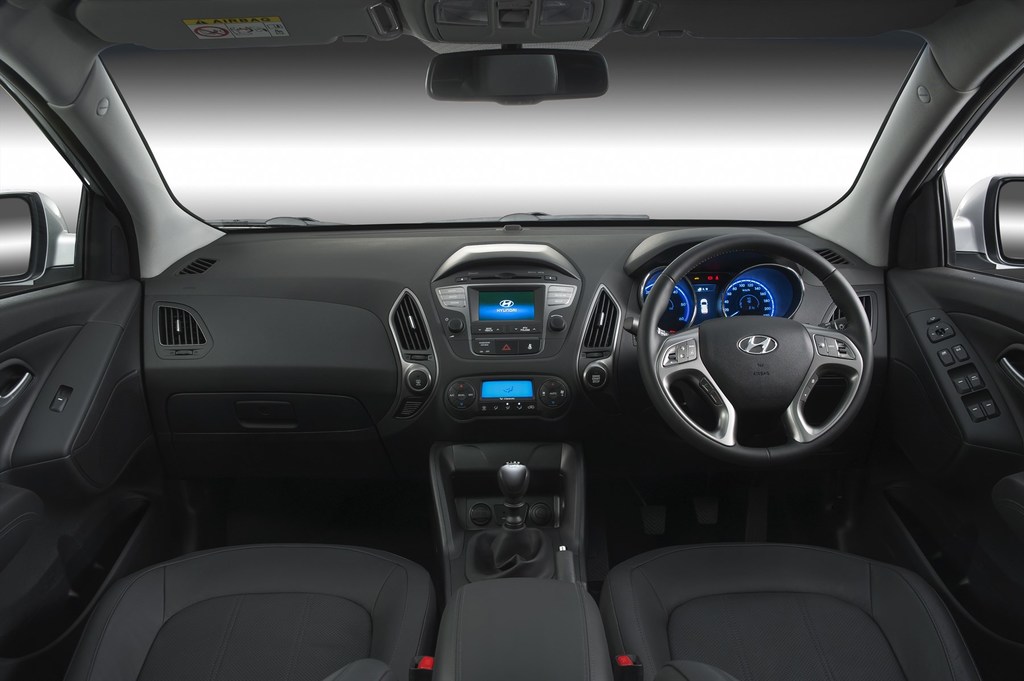 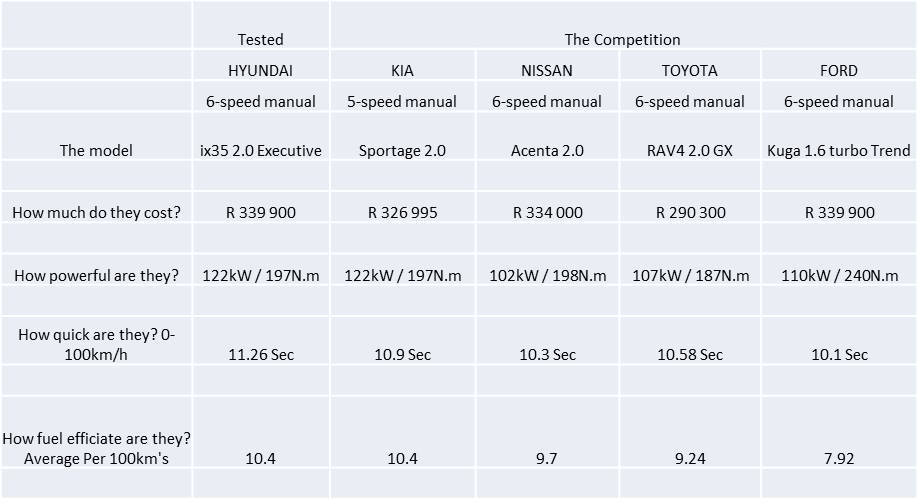 The ix35 recorded five stars in the EuroNCAP crash rating.

The compact SUV segment is hotly contested and as a result there are a variety of good choices on offer. Aesthetics are a personal matter but seeing that I’m giving my option, I think the Kia Sportage is the best looker in the bunch, though suited for a male. The Kuga is the best all-rounder. The RAV very good value for money. The Nissan is old and being replaced in July/August so keep your eyes peeled for the all new Qashqai then.

You won’t go wrong owning an ix35, perhaps its sexiness will sit well on you and you’ll get a few admiring glances while enjoying its relaxed and refined ride!