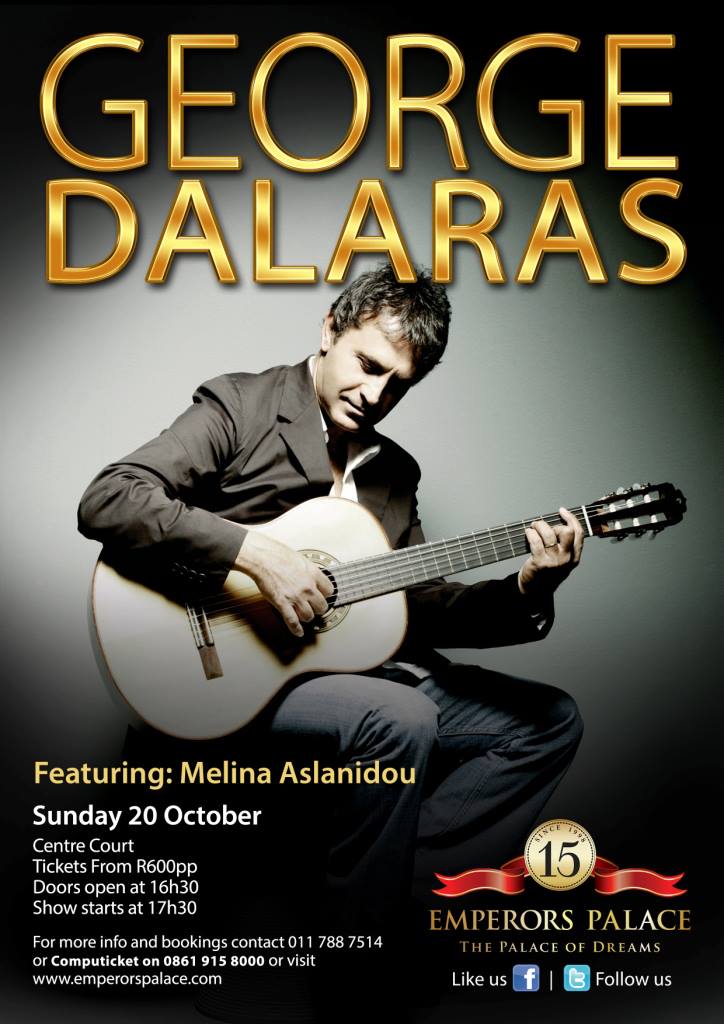 George Dalaras will grace South African shores in a performance that simply cannot be missed.

As part of Emperors Palace’s 15th birthday celebrations, the internationally acclaimed Greek icon, Yiorgas (George) Dalaras will be performing his greatest hits in the Centre Court for one night only on 20 October! Dalaras is one of the world’s most exciting and talented Greek singers and has the power to unite all nationalities and speak in one voice through his music which is enjoyed by all.

Thanks to his exceptional voice and instrumental skills, Dalaras has always been at the forefront of innovation in contemporary Greek music. In the course of the last two decades he has become the benchmark of what his kind of music is (or should be) about, renewing the genre by leading his mainly youthful public along neglected musical paths like the smirneika and the rebetika.

In a country with so many flourishing traditions, Dalaras has become a musical phenomenon. His collaborations with other international artists have demonstrated his ability to cross over into other styles. He has, for example, recorded and appeared on stage with Sting, Paco de Lucia, Al di Meola, Goran Bregovic, Ian Anderson, Joan Faulkner, Jocelyn B. Smith, Emma Chapplin and produced albums such as the “Misa Criolla” of Ariel Ramirez and “Latin”.

Presented by Africa Pacific Promotions, this universally acclaimed singer will be in South Africa to celebrate the 40th anniversary of SAHETI School, with R100 from every ticket sold being donated to the school.

Joining Dalaras on stage will be supporting artist, Melina Aslanidou, who is no stranger to performing with Dalaras. The two artists produced a collaborative live album that has enjoyed great success, aptly titled ‘Definitely a window with a view’. The deep and sultry voiced Melina often accompanies Dalaras on tours and her international experience makes her a wonder to behold on stage.

Africa Pacific Promotions on 011 788 7514 or through Computicket at www.computicket.com.