The modern day orange carrot wasn’t cultivated until Dutch growers in the late 16th century took mutant strains of the purple carrot, including yellow and white carrots, and gradually developed them into the sweet, plump, orange variety we have today. Before this, pretty much all carrots were purple with mutated versions occasionally popping up including yellow and white carrots, among others. 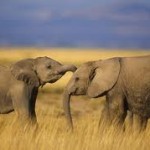 During your lifetime, you’ll eat about 60,000 pounds of food, that’s the weight of about 6 elephants.

“Q” is the only letter in the alphabet not appearing in the name of any U.S. state.