More than 30% of the greenhouse gas produced by New Zealand comes from the burps and farts of the country's 45 million sheep and 10 million cows.

In fact, agriculture accounts for 14% of greenhouse gases emitted worldwide every year. Also, most of these emissions are methane, which is 23 times as powerful as carbon dioxide. The average cow releases 100-500 liters of methane into the atmosphere EVERY DAY. The problem is especially bad in New Zealand, where they proposed a flatulence tax in 2003.
(source) 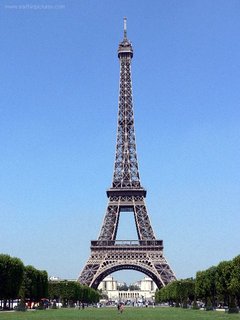 The Eiffel Tower was originally supposed to be demolished.

That's right - one of the world's most beloved landmarks, symbolic of Paris and French culture worldwide, was only supposed to stand for 20 years! The tower was never intended to be permanent; it was only constructed as the entrance to the 1889 World's Fair and in celebration of the 100th anniversary of the French Revolution.

Many Parisians originally did not even like the design of creator Gustave Eiffel! They protested the tower's construction, thinking that it would be an eyesore. The Eiffel Tower was supposed to be destroyed in 1909, but it was saved from this predetermined fate by an antenna atop the thousand-foot structure! This antenna was being used by telegraph companies at the time and would gradually become incorporated into newer communication technologies such as radio and television.

Joseph Stalin trained to be a priest for five years.

At age 14, Stalin was sent by his mother to Tiflis Theological Seminary in what is now Tbilisi, Georgia. Young Joseph had earned a scholarship there and intended on eventually becoming a priest in the Georgian Orthodox Church. This didn't quite work out, as Stalin got caught up in a secret socialist society called Messameh Dassy. After five years of sneaking out to attend revolutionary meetings, the seminary finally kicked him out. It is not known how much of an effect these years had on his later career, but it can't be denied that these years had a great influence on Stalin's political future.

One typical ejaculation contains 150 mg of protein, 11 mg of carbohydrates, 6 mg fat, 3 mg cholesterol, 7% US RDA potassium and 3% US RDA copper and zinc. The protein content is roughly equivalent to that found in one egg white. Also, women physically exposed to semen are less likely to suffer from depression. The ingesting of it is called 'spermophagia'. Studies suggest that seminal plasma both prevents and fights cancer, particularly breast cancer.