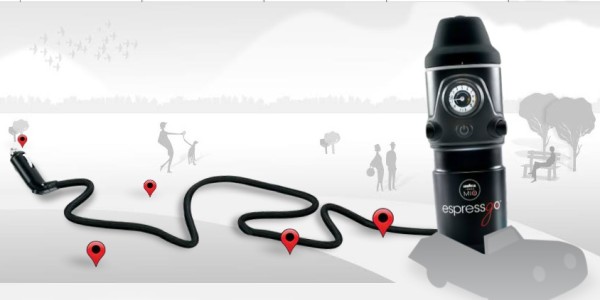 The little gadget, called the A Modo Mio Espressego, is designed to sit upright in a car’s cupholder and should take just under two minutes to deliver an espresso into a 50ml cup, once it’s been connected to the vehicle’s 12-volt socket and water has been added.  What’s more, is that the gadget is designed to work exclusively with the company’s coffee capsules (of which, 10 flavours are available), thus illuminating coffee grind mess in your car’s front cabin.

The A Modo Mio Espressego weighs less than 1kg (880g) and as it comes with its own carry bag,this means that as soon as you get to the office after a grueling hour+ commute, you can instantly, with the switch of a plug-in, have another quick fix to get you through the day.

Unfortunately, we here in SA have to wait a little while longer until we may experience absolute bliss on our highways, because it hasn’t launched here just yet.  You can however purchase it in select European countries such as Italy, Spain and Portugal.