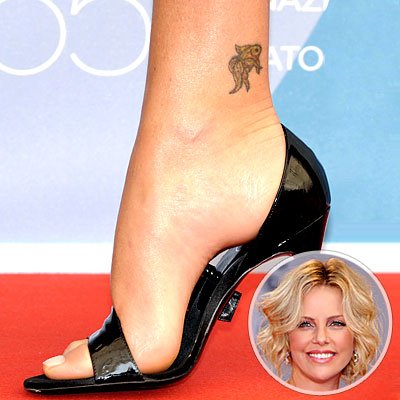 Charlize Theron and her mom have matching Koi fish tattoos on their ankles. The colorful Japanese carp fish often represent determination and power, because they are able to swim upstream even when faced with obstacles like waterfalls. Theron also has a lotus flower on her right foot. 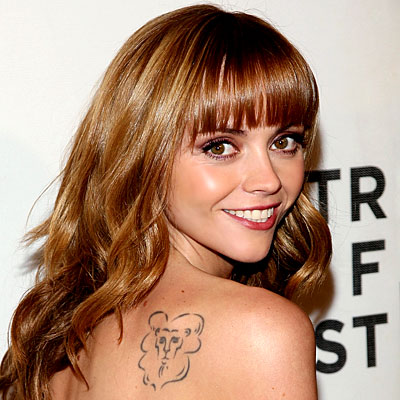 Of Chrustina Ricci's eight tattoos, the lion on her right shoulder is most visible. "It's Aslan, the lion from 'The Lion, the Witch, and the Wardrobe,'" she has said. "I struggled through my oppressive teenage years, and when I turned 18, I escaped. Like Aslan, I was finally free." 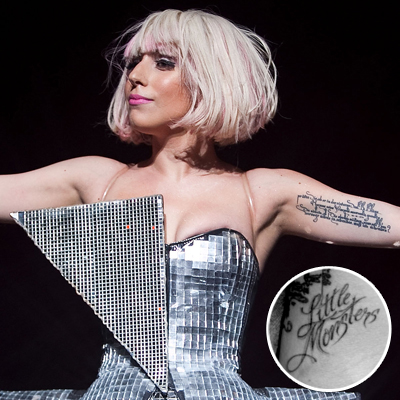 Grammy-winning superstar Lady Gaga's most notable tattoo is an homage to her 'Little Monsters', her nickname for her fans. "Look what I did last night," she tweeted after leaving the tattoo parlor. "'Little monsters forever,' on the arm that holds my mic." 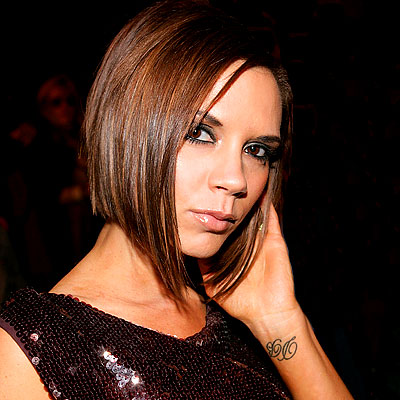 Power couple David and Victoria Beckham share a love for tattoos and even flew their favorite tattoo artist, Louis Molloy, in from Manchester, England once for some inking. Posh has two tattoos dedicated to her husband of 11 years, including his initials on the inside of her left wrist. 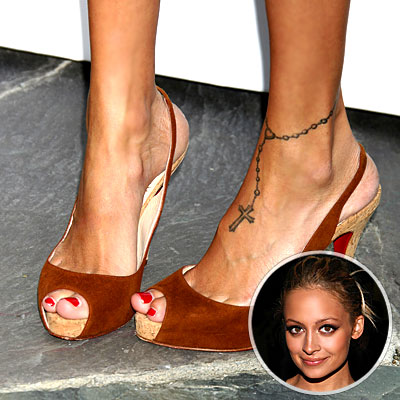 The rosary permanently wrapped around Nicole Richie's left ankle has become a popular request by girls at tattoo parlors. In addition to Richie's eight other tattoos, she also has several small dots on her finger from when she accidentally dropped a tattoo gun. Richie told Vanity Fair, "The tattoo artist told me not to play with the tattoo gun, so of course I did." 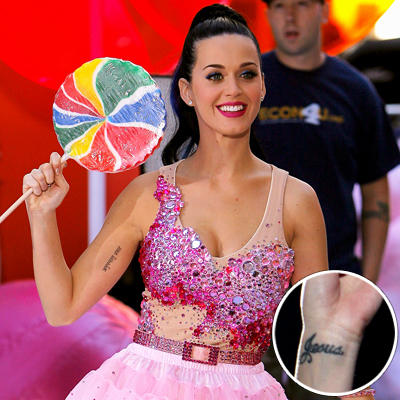 Newlyweds Katy Perry and Russell Brand have matching tattoos in ancient Sanskrit on their biceps that read "Anuugacchati Pravaha," which means "Go with the flow." "That's our motto," she has said. "We're a bit cheesy—as all couples in love are." Perry also has a strawberry on her ankle and "Jesus" tattooed on the inside of her wrist. When Penelope Cruz got "883" tattooed above her right ankle while she was dating Tom Cruise, many wondered of the meaning behind it. Beyond the fact that eight and three are her lucky numbers, the actress has never disclosed what the tattoo actually represents. Fans and the media have speculated everything from Scientology ties and Harley Davidson bikes to numerology meanings, but Cruz has shot them all down. "It's not a Harley Davidson. It's not the different things that have been said," Cruz has said. "I don't think anyone cares. It's my own tattoo."

Comment by Candice James on July 3, 2011 at 13:19
nicole richie tattoo is my favourite and charlize's