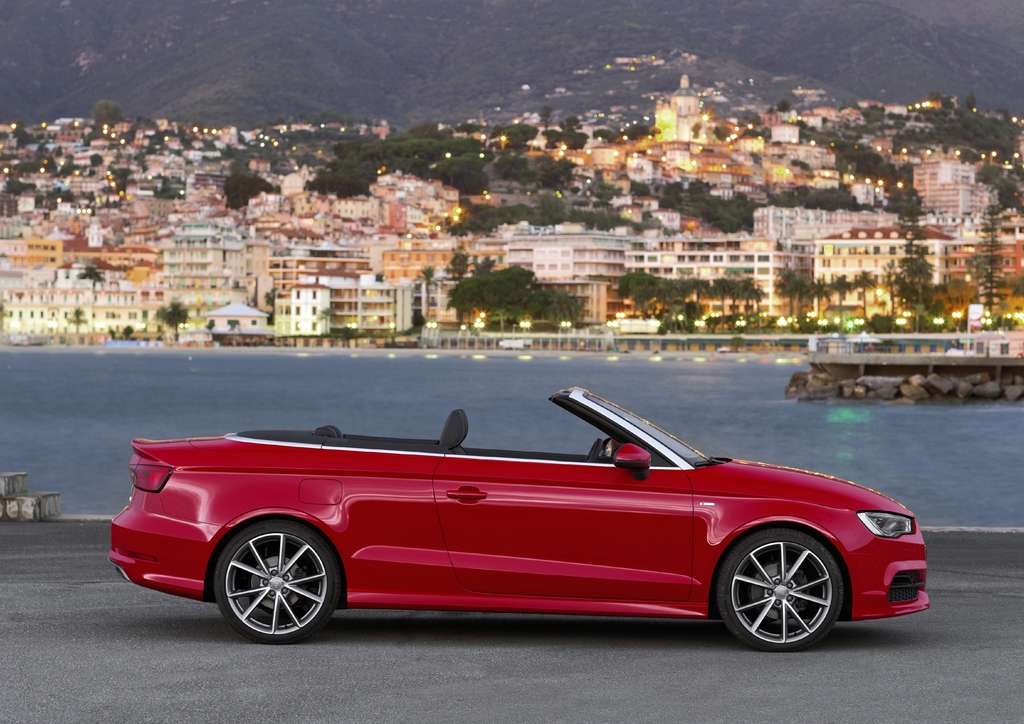 So I hear that vitamin D is good for you- in small doses that is! A couple of minutes (apparently around 20) directly from the sun before 10am or after 3pm is an ideal period for capturing it. The benefits: strong bones, teeth and a healthy immune system. Sounds like a vitamin that we could all do with since a few of us apparently suffer from a deficiency due to modern office environments.

Who has time to sit in the sun for 20 minutes a day, and at specific times? I think I have a solution! We all drive to and from work. The drive on average takes between 15 and 30 minutes each way. So imagine the wind in your hair and the sun’s rays kissing the tip of your nose while driving to and from work? Pressing the roof release button in Audi’s newest boulevard cruiser, the A3 Cabriolet, takes just 17 seconds. It’s an artful display and one that you never get tired of watching over and over. Not only is it an ideal solution for capturing your daily units of the good stuff (Vit.D), it happens to be an incredibly well-honed and articulate vehicle.

The new A3 is bigger (18cm longer and 2cm wider) than its predecessor. Being bigger means that it is now better proportioned and it also happens to be better than the car it replaced. It is built off the sedan version of the A3 where previously this option wasn’t available, and so was a drop top hatchback. Now booted it looks more like a compact Audi A5 cabriolet. The obvious advantages over its predecessor are a bigger boot and increased rear legroom. 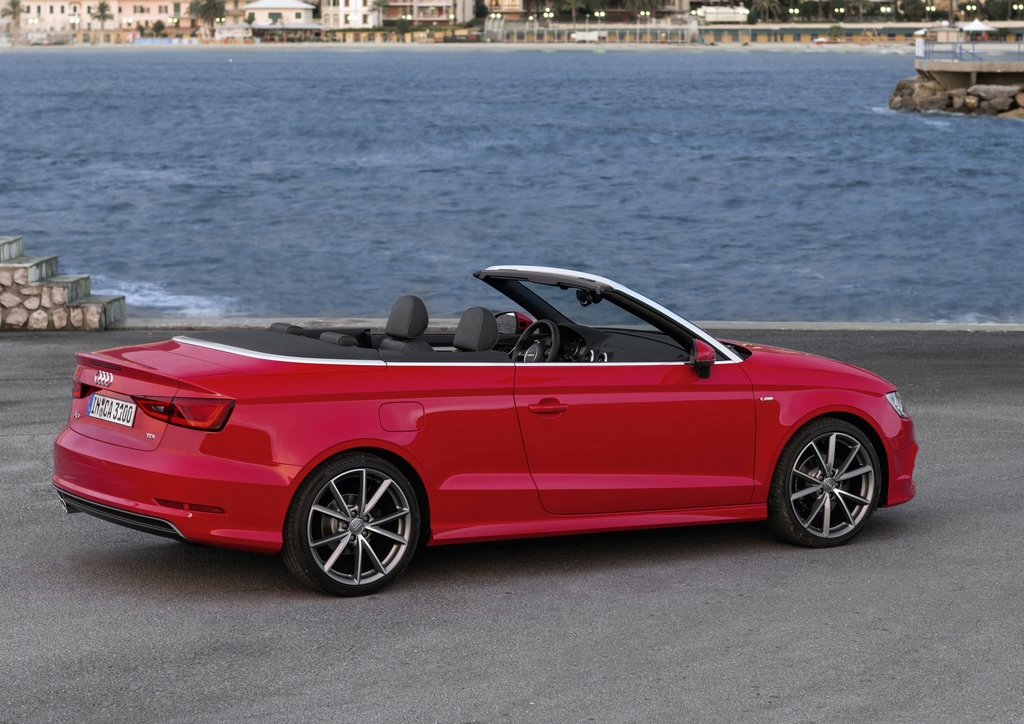 The A3 is light on its feet (1 345kg). Its mechanical components work as well as strawberries and whipped cream during a Wimbledon final- perfected heaven.

Having driven the 1.4 SE TFSI (92kW) manual sedan version of the A3 a few weeks prior, I was interested to experience the larger engine 1.8 SE TFSI S Tronic by comparison. Traditionally convertible variants of either coupe or sedans are compromised. With the roof gone, which acts like the matriarch, keeping things together, it is surprising to feel how composed the car is without its roof. It feels taut, lean and athletic. The 1.8 TFSI (132kW) engine doesn’t have to work as hard as its little brother, the 1.4 TFSI. It effortlessly manoeuvres the car without any strain or fuss. Dynamically the cab is a cruiser with a level of athleticism, but not a greyhound off the starting blocks- that is left to the S3 cabriolet.

All three cabriolet varieties are fitted with Audi’s bullet quick shifting 7-speed double clutch gearboxes, called S Tronic.Though the 6-speed manual gearbox is light, precise and almost telepathic about its functioning, my personal preference specifically for this type of vehicle would be to option the automatic gearbox.

The interior of the car is simple and clean, strong in its Bauhaus design ethos. In fact the design stands out from the crowd and leaves the occupants initially asking and thinking where are all the buttons? After time, and with greater familiarisation,you realise that nothing has been omitted, but rather intelligently incorporated and simplified with clever use of the on board computer and toggle switchgear. 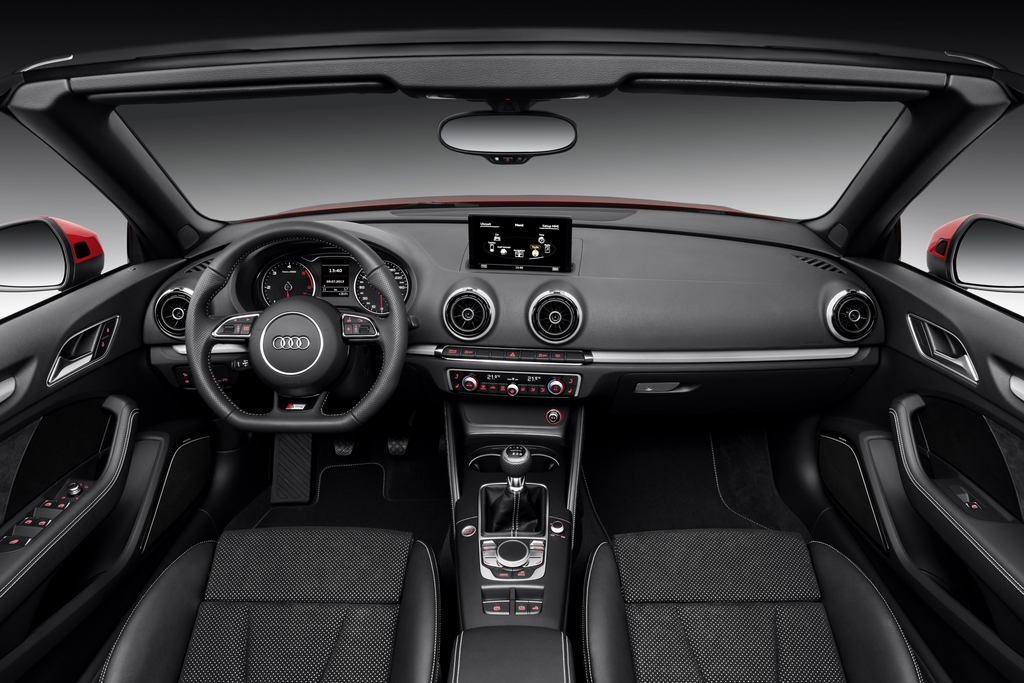 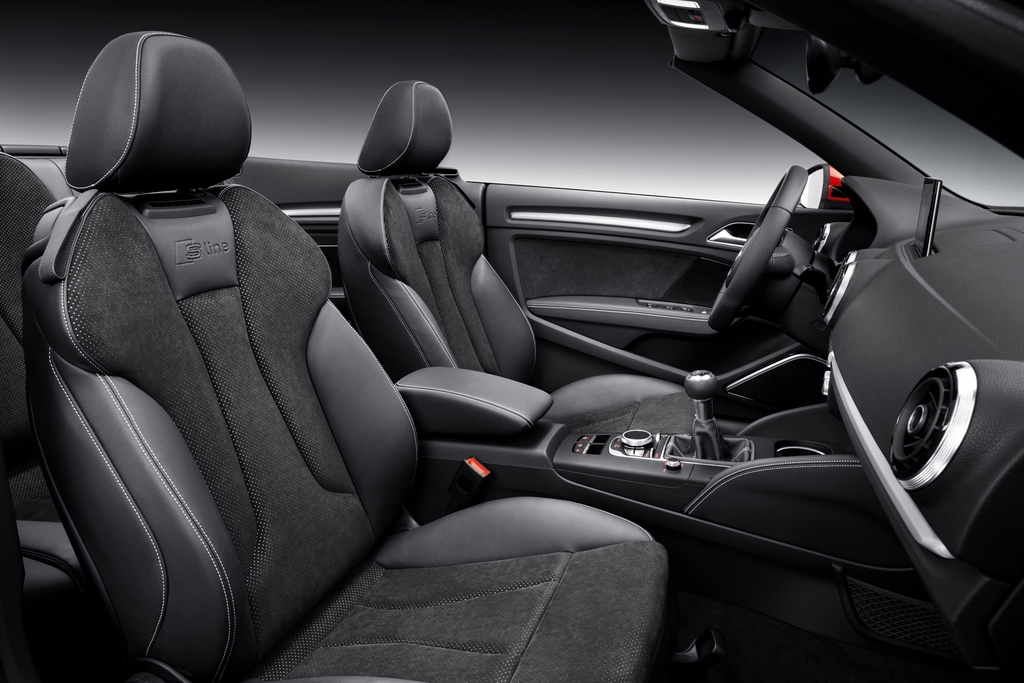 The canvas roof is available in three exterior colours, namely: black, grey and brown, with its roofliner available in black and lunar silver, and a wind deflector as standard on all A3 Cabriolet models. An active rollover protection system protects the occupants in case of a rollover accident. It consists of two spring-loaded plates that are recessed into the body.

Customers can choose from 13 different exterior paints for the body.

The Audi A3 Cabriolet will be available with the following standard equipment:

The A3 Cabriolet comes standard with a 5 year/100 000km maintenance plan and an impressive 5 star NCAP Euro crash test rating. 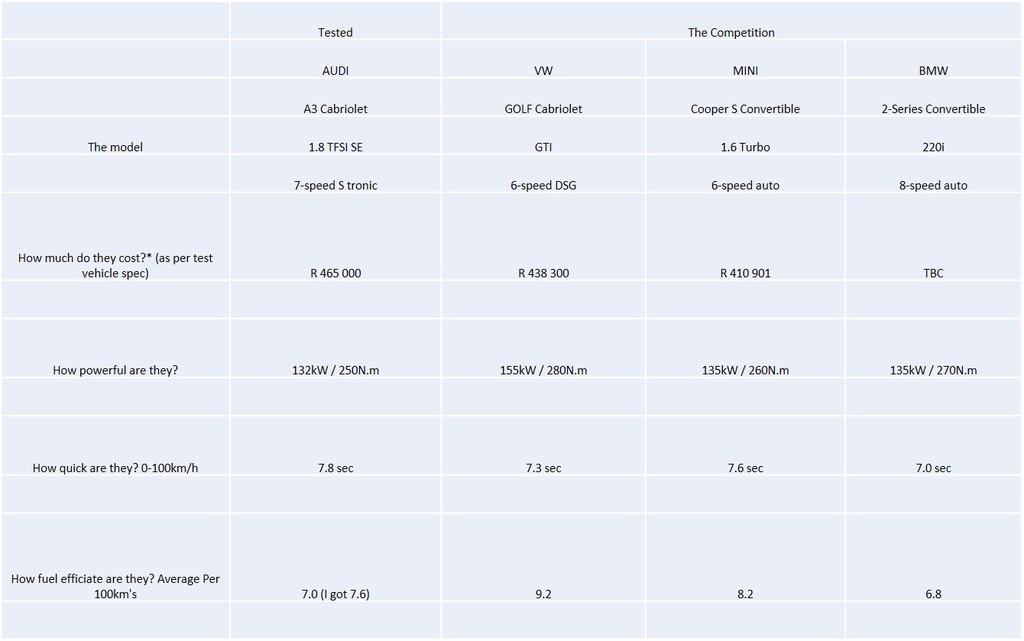 If the A3 Cabriolet was a salad and not a great open top cruiser, it would be a light summery option. It would be a mixture of perfectly sized green leaves toasted with roasted almonds and cherry tomatoes that pop on your tongue- leaving a sweet residue. The dressing would be a blend of the finest olive oil and a reduced balsamic vinegar with just a hint of lemon juice. It would mix traditional bacon bits with succulent avocado and artichokes. It would be fresh, healthy and easy to eat, while still being mouth wateringly delicious.

The A3 only has one real direct competitor, the BMW 2-Series convertible. It isn’t here yet so there isn’t any real reason to compare it.

The GOLF GTI cabriolet is built off the outgoing GOLF 6’s platform so it’s not as ‘fresh’ as the A3, but a powerful vehicle with a badge that promises a heritage.

The MINI Cooper S is also not ‘fresh’ out the kitchen, so to speak, but rather a playful character. It has a built-in go-cart undertone driven by its charming British/Germanic DNA.

My choice: the A3 Cabriolet- the light summery option!