A guide to Chic Jozi 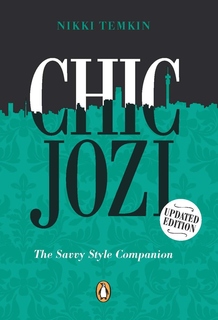 This is a long overdue review of one of those essential companions for making this city your friend. Chic Jozi [by my friend Nikki Temkin] was first published in 2009 and has now been updated. It opens with the disclaimer: “Joburg is notorious for being a fickle and fast-changing city. Stores open and close all the time, change location and name …” Too true and the reason why impulse buying is key to survival here, as one minute that covetable item is in that window and the next day that building has been demolished to make way for another mall.

The guide is for fashionable locals and visitors alike (Be warned it caters to refined tastes and a more “northern suburbs sensibility” – so you won’t find listed manly man pursuits, or beer, or franchise food outlets, or inner-city haunts). That’s not a bad thing though and that’s not to say it doesn’t cover more far-flung places like Germiston, Bedfordview and Rosettenville.

Chic Jozi is focused on finding out the city’s suburban chic secrets before they hit the magazine headlines. There’s definitely a preponderance of stores located in Hyde Park Corner but you can’t blame her - it’s Joburg’s equivalent of LA’s Beverley Centre, the place to be seen hanging out on a Saturday for a certain social set. There’s the well-trodden territory and then there all sorts of great finds scattered across the city, signs and markers that lead to everything from vintage finds (my favourite Melville store Reminiscence is listed – I once bought a fur wrap there after the delightful owner said, as I cautiously draped it over my shoulders, “Dahling, you look just like Alexis Carrington.” Having been raised on Dynasty – we were from Benoni – you would have had to pry my fingers loose from it with a crowbar. It still lies in my cupboard, keeping itself warm.

Enough reminiscing. There are great listings of where to find anything from the best eyebrow shaper to yoga school, kosher sausages, art deco jewellery, perfect pastries or “how to be a DJ” course. There’s kids stuff and places to see, walks to take and little luxuries to indulge in. One of my favourite sections has to be the one that lists ways of solving problems by throwing money at them – people who do all the stuff you don’t have time for including buying your groceries. It is the type of guide that can satisfy all sorts of to do lists and no self-respecting girlie girl or just lover of all fine things should be without it.

You may want to read more from Laurice

Comment by Lauren Wasserzug on June 9, 2011 at 21:12
Dynasty-wow,that invokes many a childhood memory! From my dad going out to buy 'goodies' from the cafe to stay up for the "late show" (I think it started at 9pm!)to lying on the floor in front of the tv with cushions and blankets and fighting for the middle space between my two siblings. Thanks for that..
Imagined myself to be a self-respecting girlie girl and I don't have a copy of the book..need to rush right out and buy one!!