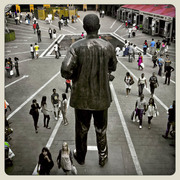 Export to Outlook or iCal (.ics)

The inaugural Ernest Cole Award Exhibition will take place at the Wits Art Museum and will include the book launch of the first winner of the award, documentary photographer Dale Yudelman. Ernest Cole was born in South Africa in 1940 and worked as a photojournalist for Drum magazine in the mid 1960s. The House of Bondage, his photographic essay showing what it meant to be black under apartheid was published in New York in 1967 and was immediately banned in South Africa. In contrast to Cole’s work, Yudelman’s project is shot on an iphone exploring life in South Africa today.